I sympathize with water and wastewater utilities. Tasked with more responsibility than ever, too often they aren’t supported with the necessary financial resources. To draw a baseball analogy, apropos for this time of year, it's like trying to win the World Series with minimal payroll (capital improvement funds) and old, broken-down players (infrastructure). Would baseball fans pay out of pocket to improve their struggling team’s fate? Probably not. But in the case of water utilities, the ‘team’ is your local utility, responsible for a life-giving service; and if they don’t win each and every day, the community suffers.

Ideally, customers would readily accept reasonable rate increases with the understanding that it is tied to their own prosperity, but it remains a tough sell because water has long been delivered so cheaply and reliably. Unfortunately, many of the old, reliable players — infrastructure installed decades ago — have reached retirement age, necessitating increased revenue to support renewal, growth, and sustainability. In order to keep winning the daily battle, the question becomes: How can utilities rally support and get ratepayers to back their local ‘team’?

A study by Hahn Public, Rate Case Messaging: The Character/Competency Conundrum, tested a variety of messages to find out, with findings that can help your utility lobby for investment dollars in a way that turns consumers into lifelong fans.

The study suggests messaging do’s and don’ts based on the reactions of 800 real utility customers from across the U.S. Respondents were asked to assess commonly used “fact and feature” messages, which are explained by the report’s authors, Brooke Goggans, Ryan Orendorf, and Mike Clark-Madison:

“Fact-based messages are concrete and speak to verifiable characteristics of an increase — for example, ‘Current rates are lower than those of peer utilities.’ Feature-based messages speak more to values that consumers derive from their relationship to the utility, such as security, satisfaction, comfort or convenience.”

The infographic below provides a snapshot of the winners and losers. 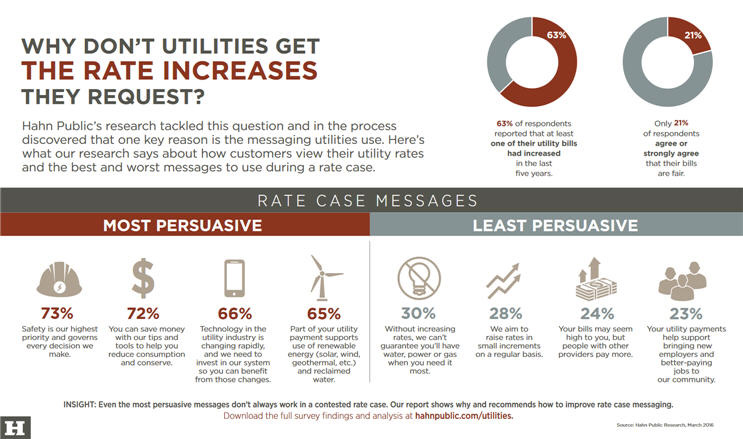 As shown at top-right, 63 percent of customers saw a utility bill increase within the past five years. Of that group, only 21 percent saw their bill as “fair,” and many were found to question the character and competence of the utility.

“Opponents may have few, if any, facts with which to argue, but are quick to paint the utility as either greedy and corrupt (character), or inefficient and wasteful (competence), or both,” states the report. “These strongly emotional messages are very difficult to neutralize with fact- and feature-based messages.”

Difficult, or perhaps impossible. Roughly 30 percent of customers, typically those who have recently experienced higher rate hikes, view messaging on increases from the “latitude of rejection” — dismissing any justification with nary a consideration. These customers may never be won.

Nonetheless, the study revealed the types of messages that work best for the remaining customers, who are at least open to listening.

“Testing 13 specific messages, we found that both fact-based and feature-based messages could be well-received by customers in the latitudes of non-commitment and acceptance, with the most popular reflecting themes of safety, technology, sustainable energy and water, and consumers’ own ability to save money,” said the report. 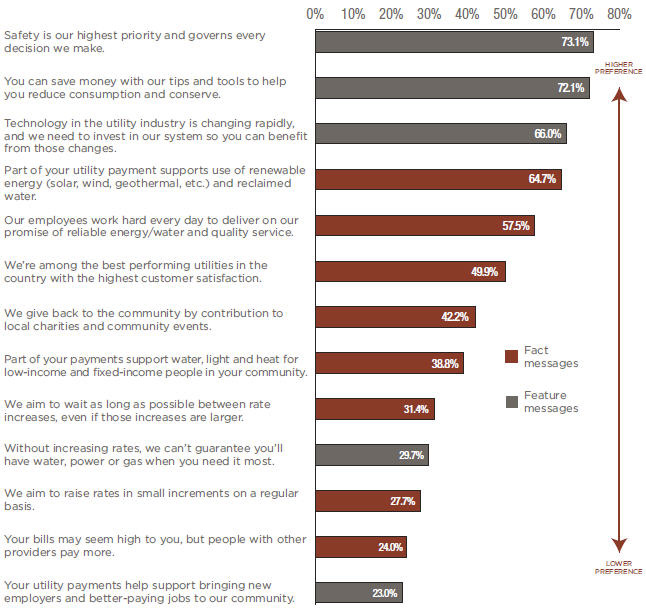 Utilities undertaking the sensitive but important mission to raise rates and revenue can develop an effective game plan based on these stats and tendencies provided by Hahn Public. For further coaching on rate-setting, download the full report.