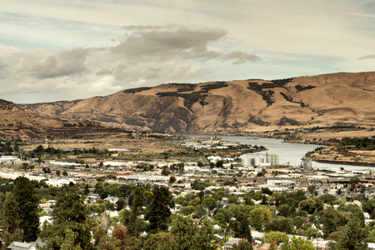 When looking toward the future, capacity and efficiency are essential to treatment plant design and construction — as is the proper project delivery method.

Design-build and progressive design-build (PDB) have often been associated with large-scale projects, supported by robust teams and owner time and resources. While PDB has certainly been utilized successfully in this setting, it’s equally appropriate for designing and building public infrastructure of smaller scopes, teams, and budgets. State and municipal governments in Washington and Oregon have been early adopters of the delivery method, creating regulatory frameworks that allow for PDB to be used on a range of public works like water/wastewater treatment plants. As a result, the region is home to a growing number of facilities that have recently been completed, or are currently underway, and provide insight into the benefits of PDB and its application to water and wastewater treatment specifically.

The City of The Dalles Wastewater Treatment Plant, the first progressive design-build water treatment plant in the state of Oregon, provides one such example. Located in north central Oregon on the Columbia River, the City of The Dalles is a relatively small municipality. Its wastewater treatment facility serves approximately 15,100 residents and was in immediate need of upgrades to bring the plant’s influent pumping capacity into conformance with the Department of Environmental Quality’s criteria for firm pumping capacity and to improve the screening and grit removal process. The combination of a fixed budget and ambitious timeline was an early defining feature of this project. In addressing these constraints, PDB presented two immediate benefits. First, design phase cost and overall fee structure were determined upfront during the procurement competition. Then, a series of four workshops determined the design and upgrades that would best serve the client’s goals within a set guaranteed maximum price (GMP). This approach was ideal for assuring local elected leaders, regulatory agencies, and ratepayers that the plans were buildable within the set budget.

Similarly, PDB allowed for cross functional collaboration between the design-build team (Mortenson Construction and Kennedy/Jenks Consultants), avoiding unnecessary design iteration and shortening the timeline for the project. Throughout the process, the project team shared updates with elected leaders and relevant regulatory agencies. These presentations sparked conversations on further improvements to the design and resequencing of future planned work. For example, city council members identified environmental sustainability as a key priority, highlighting to the design-build team the importance of implementing biogas or solar solutions to improve the energy efficiency of the finished wastewater treatment plant.

In response to this feedback, the project team collaborated on tech upgrades that would optimize the treatment plant’s performance in this area while still adhering to the approved GMP. One of the largest expenditures of energy in the existing plant was the blower, a machine used to pump air into digester tanks during the aeration phase. Blowers can account for nearly half of the overall energy usage in treatment plants, making this function a clear target for sustainable solutions. By diverting organic waste to lower the biological oxygen demand of the tank, the project team was able to significantly decrease energy usage overall. The impact of this alteration to the original design significantly improved the energy efficiency of the facility.

Continuing to address stakeholder feedback regarding environmental sustainability, the project team investigated the possibility of offsetting the energy required to operate the facility’s boiler. A microturbine was added to the scope of the planned upgrades. Gas emitted by the digester tank fuels the turbine, which in turn creates electricity, decreasing the overall energy usage of the plant.

In the case of these environmentally conscious design features, the flexible and collaborative nature of the PDB process enabled the project team to respond to stakeholder requests, ensuring the final design better reflected the priorities of the client. Public infrastructure projects often have an impact on thousands of lives and therefore are subject to input from a variety of regulatory agencies, elected officials, and communities. Given this reality, the collaborative nature of PDB is a distinct advantage. 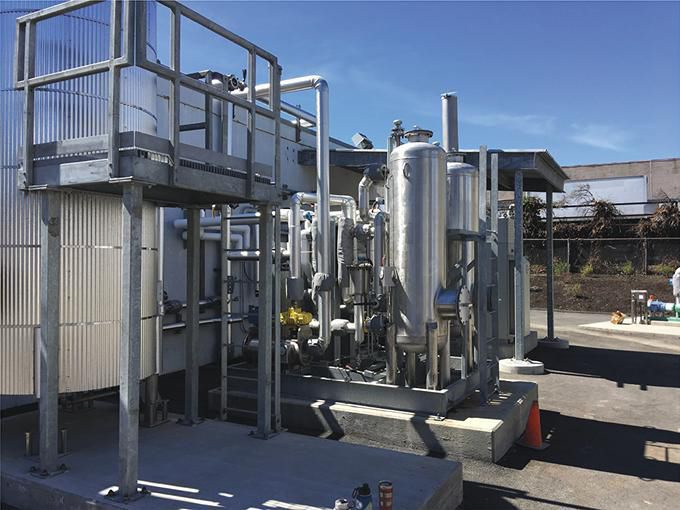 A biogas-powered microturbine was installed to improve energy efficiency.

This aspect of the delivery method was also essential in addressing the project’s challenges. While the environmental upgrades to the plant’s design were essential, they presented an additional expense. To ensure that the improvements did not increase the final cost to the client, the project team collaborated to identify additional funding sources. Municipal infrastructure projects like water and wastewater treatment facilities are often eligible for diverse federal and state grants. However, these programs can be complex to navigate. By collaborating with the relevant stakeholders, the project team was able to successfully secure additional public funding to offset the cost of energy efficiency improvements. For example, the resources gained from a tax credit provided by the Oregon Department of Energy (DOE) and a Department of Environmental Quality (DEQ) loan forgiveness program effectively funded half of the environmental upgrades.

The project’s timeline and budget were also challenged by unpredictable weather and forest fires. The City of The Dalles’ facility is located 85 miles east of Portland in the Columbia River gorge. Snowstorms and fires led to road closures that restricted access to the site. To ensure that the original timeline was met, the team relied on open communication and collaborative relationships, with some members remaining remote and others completing the difficult journey to deliver needed supplies. The cohesiveness and flexibility of the team were essential to adapting to these difficult conditions and ensuring they did not derail the project’s goals.

Upon completion, The City of The Dalles Wastewater Treatment Plant’s capacity was increased while its energy usage, and therefore operation costs, was reduced. Through effectively utilizing the progressive design-build delivery method, the project team was able to complete the plant upgrades under the GMP of $14.4 million within an ambitious, shortened timeline. As a result of this project, the plant’s capacity has increased from a peak flow rating of 7.7 MGD to a projected capacity of 13.2 MGD by the year 2037. As The Dalles continues to grow economically and in terms of population, this additional capacity will be essential to supporting the municipality’s increased wastewater treatment requirements and lay the foundation for future upgrades.