The ozonation process for water purification is a powerful option for optimal disinfection and the reduction of micropollutants. Still, it may result in the formation of potentially toxic oxidation byproduct bromate in bromide-containing waters. This paper provides a high-level overview of the problem and highlights the main pathways of ozone decomposition and propositions to control bromates formation.

An ozone process is always based on the effect of direct and indirect reaction mechanisms.

In practice, both direct and indirect oxidations will take place. One kind of reaction will dominate, depending on various factors such as temperature, pH, and chemical composition of the water.

In the direct reactions, ozone depletion is fast. Furthermore, if the solution is stirred, a higher speed of stirring can result in a more rapid ozone decomposition. Also, higher ionic strength accelerates the depletion.

The direct reaction of ozone is often selective towards specific compounds and functional groups. It dominates in acidic solutions where the ozone initiation reaction becomes significant. This happens when a molecule of ozone decomposes in an activated atom of oxygen and a stable oxygen molecule.

After initiation, two reactions may take place. The atomic O continues to react with a water molecule, H2O, or recombine and form a new energized (excited) ozone molecule that subsequently reacts with H2O.

The oxygen species formed are propagating products that react further, forming other radicals such as superoxide (O2 -) and hydroperoxyl (HO2). They also diffuse and react with more O3 in the bulk, continuing the chain reaction. 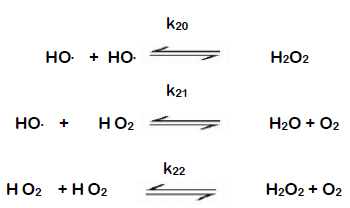 There is a dominance of secondary oxidations in indirect reaction, and ozone slowly decomposes in multiple steps involving radical formation, such as free OH• radicals, which increase with pH. The depletion rate of ozone is reduced in strongly alkaline solutions, which is consequential to the disintegration of ozone in water into OH• radicals, oxygen species with an even more robust oxidation mechanism than that of ozone.

One reason for the observed decrease in overall decomposition rate can be the formation of ozonide, O3-, which reacts with H2O2 or OH• radicals produced in the ozone decomposition, reforming ozone. 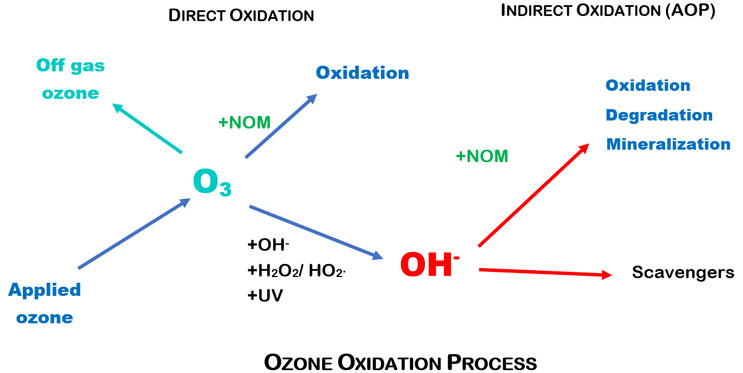 Contrary to ozone, OH• radical reactions are largely non-selective. Indirect reactions in an ozone oxidation process can be very complex. An indirect reaction takes place according to the following steps: initiation, radical chain reaction, and termination. Initiation is the first reaction that takes place, and it is accelerated ozone decomposition by a type of initiator. This can be an OH- molecule.

Now, a radical chain reaction takes place, during which OH• radicals are formed. The reaction mechanism is as follows:

The OH• radicals that have formed react with additional ozone according to the following reaction mechanism.

During the last reaction, HO2• hydroperoxyl radicals are formed and can start the reaction all over again, repeating the second equation shown above, where a superoxide radical was formed. As a result, a chain reaction develops, which is maintained by so-called promotors, which are substances that transform OH• radicals to O2•- superoxide radicals. Various substances can become promotors, even including organic molecules.

Inhibitors contribute to the termination step. These are compounds, radical scavengers, which consume OH• radicals without regeneration of O2•- superoxide radicals. Termination is also brought about by exhausting the source of energy that catalyzes the chemical reactions.

Although few byproducts are formed by ozonation, ozone reacts with bromide ions in water to produce bromate. 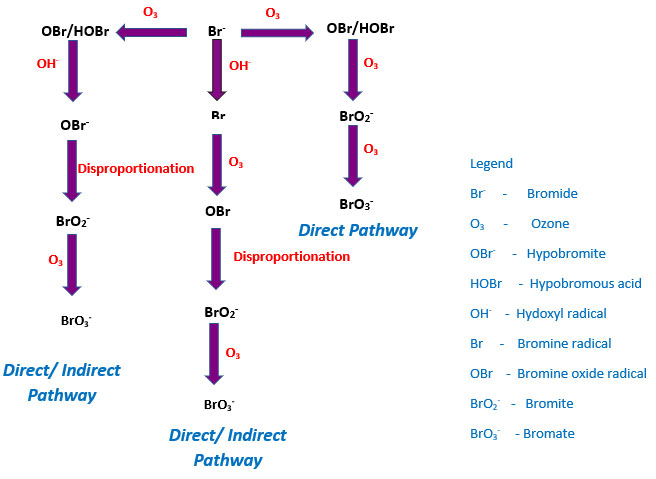 In aqueous systems, various models have been offered to explain bromate formation during ozonation, and there are three main proposed pathways. The dominance of a particular pathway is dependent on the amount of bromide, organic carbon, and pH of the substrate solution.

If sufficient bromide levels are present in water during ozonation, the potential exists to exceed the maximum bromate contaminant level. Bromate formation is a complicated process that involves both ozone and its decomposition product, the hydroxyl radical, OH•. The most common is the direct pathway, the direct reaction of ozone and bromide:

The second pathway (direct/indirect pathway) is facilitated by the molecular ozone, resulting in the formation of OBr−/HOBr. However, in this route, the formed OBr− is oxidized by OH• radicals to a series of highly reactive oxygenated radicals. Further ozonation produces BrO3− ions.

In the third pathway, the OH• radicals interact with bromide ions resulting in the generation of BrO radicals, which is disproportionate to bromite ions. The bromite ions are then oxidized by molecular ozone to produce bromate ions.

What could be behind the formation of bromate coming from so many different processes?

Customarily, shortcomings of oxidation could be resolved with traditional advanced oxidation processes. However, this approach has not been successful when applied to the control of bromate. Catalytic reactions seem to enhance bromate formation if bromide ions are present in the source water. This may happen because bromate formation has less to do with the oxidants and more to do with the character of the activation energy. Chemical reactions can be facilitated by external sources of energy and by internal sources of energy. Catalysts are substances that can participate in a chemical reaction and increase its rate by providing a new mechanism that allows the reaction to proceed via a minor activation energy pathway than the uncatalyzed reaction.

Ozonation involves high energy, and the process generates excess energy that originated from an external source. Reactions catalyzed by metal oxides and other catalysts may produce excess energy if not in equilibrium with the reactants, and the differential activation energy saved becomes surplus.

It is reasonable to deduce that when bromide ions are present in a solution with available, unused energy, bromate can easily be generated.

The advanced oxidation process is a type of chemical oxidation, which has evoked heightened interest during the last few years. Among the benefits of this process is that harmful substances are decomposed into less harmful substances or even completely mineralized in media such as water, carbon dioxide, and nitrogen. During the AOP, oxidation is primarily brought about by OH• radicals. These radicals are very reactive compounds or atoms with a very short half-life, which causes an OH• radical to react non-selective and directly with dissolved solids.

Hydrogen peroxide splits in water according to the following reaction.

The OH• compounds are radicals species that contain a very high electronic potential, which makes it the most potent oxidizer used in water treatment. The activation of OH• radicals is a very complex process, which can take place according to a variety of different reaction mechanisms. 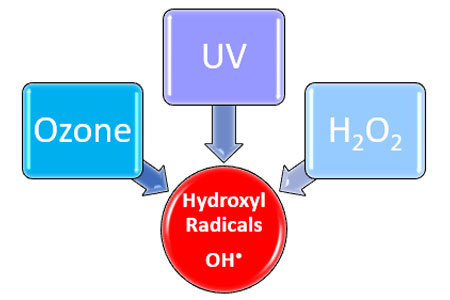 In principle, advanced oxidation processes should not generate disinfection byproducts. But ozone-based AOPs are doomed to create bromate when bromide ions are present in the untreated water in sufficient amount. Other AOPs with external energy activation are also fated to generate some bromate, provided that bromide ions will be present in the untreated water, and other conditions inherent to their goal of water purification are given. It is necessary to avoid excess oxidation energy reacting with bromide in solution.

Like every other technology, advanced oxidation processes have been refined and made simpler yet more sophisticated over time. A new generation advanced oxidation process has evolved. It is called mineral oxychloride solution, and just like the name calls it, is a formulation of minerals chelated to oxy-compounds weakly bound to chloride and stabilized in a high pH water-based solvent. Because it is in liquid form, it sometimes goes by the nickname “liquid ozone”. However, their differences are more than their similarities. Ozone generation requires an external source of energy and ”liquid ozone” does not. The activation energy of the mineral oxychloride solution has its origin at the molecular level and in the atoms of transition mineral catalysts. Their implicit vibrational energy is limited by the redox potential of the oxygen species involved in electron transport. While they can reach the highest oxidation state and support complete degradation of the oxidizable matter, including refractory, resistant compounds, their redox potentials cannot act as surface catalysts, and free surplus energy will not transfer to the water, a requirement for bromate generation. Therefore, even when the mineral oxychloride reagent is applied in excess to a water system, the bromide ions that are present will not be oxidized, and bromate will not be produced.