Opportunity Bound: From Temp, To Intern, To Full-Time Employee

But over the course of seven years, as Davis moved from Denver Water temp to summer intern to full-time employee, his work has grown to include protecting important parts of the utility’s complex network from the effects of corrosion.

Corrosion is a naturally occurring process that causes metals to decay when they come into contact with humidity, soil and water in the surrounding environment. It can eat away at pipes, creating weak spots that can turn into holes and cause the pipe to break.

With more than 3,000 miles of pipe throughout Denver Water’s system, proactively extending the life of a pipe through corrosion control is more cost effective and less disruptive than needing to replace an entire stretch of pipe, when possible. These savings are then passed along to customers.

In November 2012, Davis was a student completing his GIS certificate, and a temporary employee at Denver Water.

His first project for the utility involved entering more than 30,000 data points about soil resistivity, the soil’s ability to conduct an electric current, from old engineering field books into a modern-day GIS database.

But he also learned about corrosion and the factors that influence corrosion.

As an intern during the summer of 2013, Davis grew his knowledge as he collected data from over 3,000 corrosion test stations connected to steel pipelines in the utility’s distribution system.

Months later, in early 2014, a full-time position opened with Denver Water’s corrosion team and Davis hired on as an engineering technician. 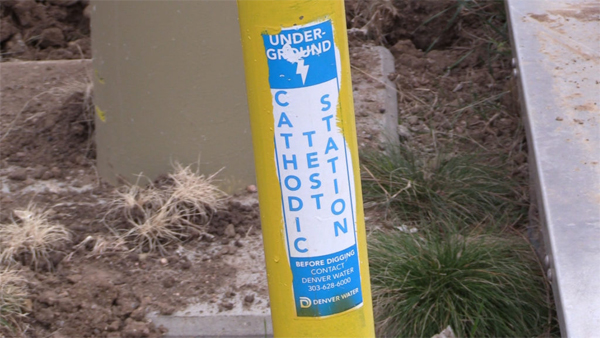 “When I started my engineering technician job, I spent a lot of time collecting data in the field and assisting engineers in the office,” Davis said.

“In the fall of 2014, our section merged with the electrical engineering group and my responsibilities grew. I started doing design work on corrosion projects and provided support on additional capital projects.”

“Working here has been an amazing opportunity for me. I think Denver Water is a great employer,” Davis said. “People are encouraged to be the best they can be, and programs like tuition reimbursement are a great example of how Denver Water invests in its people and supports their professional goals.”

But what Davis likes most about his work is the tangible and immediate difference his work makes for Denver Water.

“It’s a good feeling to see a project go from an idea into design and construction,” Davis said. “When a project goes well, I know I’ve contributed to protecting Denver Water’s assets from the natural process of corrosion.”