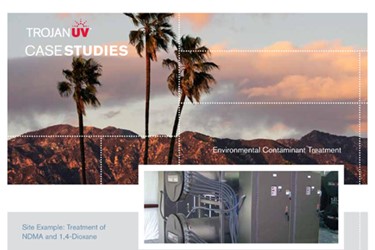 Since it was first settled in 1841, California's San Gabriel Valley has hosted a wide variety of industries. However, industrial development has left a significant portion of the Valley’s groundwater contaminated with various organic contaminants, including N-nitrosodimethylamine (NDMA) and 1,4-dioxane. While many of the contaminants can be removed with conventional contaminant treatment technologies such as air stripping and carbon adsorption, NDMA and 1,4-dioxane require more advanced technology. NDMA, produced as a by-product of rocket fuel manufacturing, is considered highly carcinogenic and requires treatment by UV light. 1,4-Dioxane, a stabilizer used in industrial solvents, requires treatment by UV-oxidation (the combination of UV light with hydrogen peroxide).