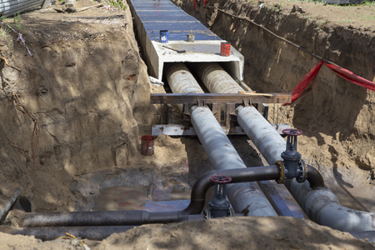 America’s water infrastructure may soon get the attention it deserves now that funding is available. Billions of dollars from the American Rescue Plan Act (ARPA) are on the way to public officials throughout the United States. Most states are allocating additional funding as well, and many local officials will take advantage of consolidating the two new revenue sources to finance large and costly projects.

The country’s infrastructure needs are massive … and critical. Because of population growth, increased demand now has many regions shockingly close to capacity. Old lead pipelines that deliver water in many parts of America are rusted and corroded, and the water they deliver no longer meets established quality standards.

Fortunately, funding is on the way to public officials who need to address critical water issues. And, the funding rules established by Congress specifically state that projects related to water infrastructure are an allowable expense. According to the Treasury Department, eligible project types include transmission, storage, distribution, treatment, lead service line removal, pollution prevention, stormwater capture, and connections of failing systems to better performing systems.

Many observers, citizens, and taxpayers are urging public officials at all levels of government to act more quickly. Too many decision makers are still stuck in the planning and prioritizing stages. This funding gift is not unexpected — the media has been announcing it for months. The angst that is building is because gathering input from constituents, establishing priorities, and determining how much funding to allocate or consolidate for projects is taking a very long time — possibly too long.

Hope springs eternal though, and most observers believe that public officials responsible for water resources and water quality soon will announce project launches since ARPA funding must be spent by the end of 2024.

The state of Kentucky plans to allocate $250 million in federal relief funds for the Kentucky Cleaner Water Program. Another $50 million is available for clean drinking water projects in rural regions. A water resource coordinator will work with city-owned water, sewer utilities, water commissions, water and sewer districts, and counties to submit funding requests to a state water resource portal. An estimated $150 million has been earmarked for county projects.

Approximately 20 percent of Louisiana’s water systems are currently in violation of state requirements for water quality, operations, and/or maintenance. In response to the urgent need, the governor announced that $300 million in ARPA funds will be used to upgrade and improve water systems. The chief engineer for the Louisiana Department of Health has identified 182 drinking water systems statewide that need immediate attention.

Officials in Montana authorized two state agencies to oversee ARPA funding allocations. The departments of Commerce and Natural Resources and Conservation will work together to process applications for water and sewer funding requests. And, the state has contributed another $400 million to be added to the ARPA funds. Cities, counties, water and sewer districts, irrigation districts, and school districts may apply for up to $25 million for each project.

Legislators approved and the governor signed a $7.32 billion budget for 2022, which includes funding from the American Rescue Plan Act. The budget allocates approximately $600 million in ARPA funding and commits $225 million more for clean water initiatives. It also directs $100 million to the state’s Clean Water Fund.

The City of Corpus Christi is set to receive $67.6 million in ARPA funding, and city officials have recommended that $48 million be used to improve the city's aging water and wastewater systems. There will be other projects of interest, and one is an $80 million project that includes a navigable canal.

Duluth recently announced a plan for its $60 million in ARPA funding. City leaders intend to use $14 million on broadband and utilities, including the replacement and upgrade of all city water meters. Officials also will allocate funds to improve drinking water standards and meet federal requirements. The new Lead and Copper Rule requires monitoring for lead at primary schools and child-care centers. It also requires cities to notify residents of potential lead exposure within 24 hours.

Officials at Fort Smith want to use most of the $21.2 million ARPA funding for upgrades and repairs to potable water infrastructure projects. The city is currently building a 48-inch water line that, when completed, will cover more than 29 miles of pipeline. The overall projected cost is estimated at $140 million. The new line will serve the city and the 13 other cities and water associations that purchase water from Fort Smith.

Marion County officials have proposed that $48.5 million of their ARPA funds be allocated to county water and sewer infrastructure projects. Since that amount of funding is not enough to cover all county needs, it will be supplicated by a local funding match.

While ARPA funding also will be used for other types of projects, water infrastructure will likely be addressed in all regions. Contractors with an interest in water-related projects will find thousands of opportunities to partner with governmental entities on ARPA-funded efforts throughout the country between now and 2024.