(Phys.org) -- Although oceans and seas contain about 97% of Earth’s water, currently only a fraction of a percent of the world’s potable water supply comes from desalinated salt water. In order to increase our use of salt water, desalination techniques must become more energy-efficient and less expensive to be sustainable. In a new study, two materials scientists from MIT have shown in simulations that nanoporous graphene can filter salt from water at a rate that is 2-3 orders of magnitude faster than today’s best commercial desalination technology, reverse osmosis (RO). The researchers predict that graphene’s superior water permeability could lead to desalination techniques that require less energy and use smaller modules than RO technology, at a cost that will depend on future improvements in graphene fabrication methods.

The scientists, David Cohen-Tanugi and Jeffrey C. Grossman of MIT, have published their study on water desalination using single-layer nanoporous graphene in a recent issue of Nano Letters. 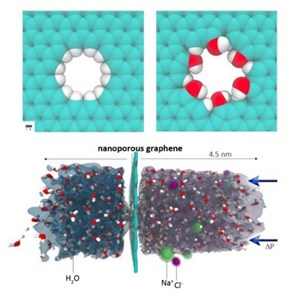 “This work shows that some of the drawbacks of current desalination techniques could be avoided by inventing more efficient and targeted membrane materials,” Grossman told Phys.org. “In particular, tailored nanostructuring of membranes could allow for actual flow of water (with full salt rejection) via size exclusion, leading to much higher permeability compared to reverse osmosis.”

This is not the first time that researchers have investigated the use of nanoporous materials for desalination. In contrast to RO, which uses high pressure to slowly push water molecules (but not salt ions) through a porous membrane, nanoporous materials work under lower pressures and provide well-defined channels that can filter salt water at a faster rate than RO membranes.

However, this is the first time that scientists have explored the potential role of nanoporous graphene as a filter for water desalination. Single-layer graphene, which is just one carbon atom thick, is the ultimate thin membrane, making it advantageous for water desalination since water flux across a membrane scales inversely with the membrane’s thickness.

Using classical molecular dynamics simulations, Cohen-Tanugi and Grossman examined the water permeability of nanoporous graphene with different pore diameters (1.5 to 62 Å2) and pore chemistry. As previous experiments have demonstrated, nanopores can be introduced in graphene by a variety of methods, including helium ion beam drilling and chemical etching. In their simulations, the scientists strengthened the nanopores by passivating, or shielding, each carbon atom at the pore edge with either hydrogen atoms or hydroxyl groups. 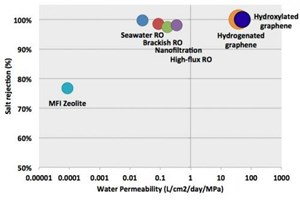 “Because those carbon atoms at the pore edge would be quite reactive without passivation, in one way or another under realistic experimental conditions they will likely have some form of chemical functionalization,” Grossman said. “This can be controlled to some extent, so we wanted to explore the two limits of hydrophobic vs. hydrophilic edge chemistries. If we had no functional groups (just bare carbon) then within a short time water molecules would dissociate at the pore edge and likely either hydrogenate or hydroxylate those carbons.”

The scientists compared the two chemistries, along with different pore sizes, of nanoporous graphene in their simulations by running saltwater with a salinity of 72 g/L over the membranes, which is about twice the salinity of average seawater (about 35 g/L).

They found that, although the largest nanopores could filter water at the highest rate, large nanopores allowed some salt ions to pass through. The simulations identified an intermediate range of nanopore diameters where the nanopores were large enough to allow the passage of water molecules but small enough to restrict salt ions.

The simulations also showed that the hydroxylated graphene significantly enhances the water permeability, which the scientists attribute to the hydrophilic nature of the hydroxyl groups. Since, in contrast, the hydrogenated pores are hydrophobic, water molecules can flow through only when in a limited number of highly ordered configurations. But hydrophilic groups allow water molecules to have a greater number of hydrogen-bonding configurations inside the pores, and this lack of restrictions increases the water flux.

Overall, the results show that nanoporous graphene can theoretically outperform RO membranes in terms of water permeability, which is expressed in liters of output per square centimeter of membrane per day and per unit of applied pressure. Whereas high-flux RO has a water permeability of a few tenths, the simulations showed that nanoporous graphene’s water permeability ranged from 39 to 66 for pore configurations that exhibited full salt rejection (23.1 Å2 hydrogenated pores and 16.3 Å2 hydroxylated pores). Graphene with the largest hydroxylated pores reached 129, but allowed some passage of salt ions.

The scientists explain that there are two main challenges facing the use of nanoporous graphene for desalination purposes. One is achieving a narrow pore size distribution, although rapid experimental progress in synthesizing highly ordered porous graphene suggests that this may soon be feasible. The other challenge is mechanical stability under applied pressure, which could be achieved using a thin-film support layer such as that used in RO materials.

“Computationally, we're looking at a range of other potentially new ways to engineer membranes for desalination and decontamination,” Grossman said. “Experimentally, we are currently fabricating nanoporous membranes and hope to test their desalination performance in the coming months.”