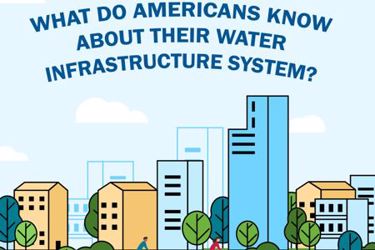 The U.S. has more 148,000 drinking water systems which distribute 39 billion gallons of potable water to homes and businesses nationwide. For those who work in the drinking water and wastewater treatment industry, the size, scope, and challenges to the country’s water infrastructure are well known. Unfortunately, the average American’s understanding of key details of water infrastructure differs from reality, as detailed by a recent survey from American Water.

Just about 10% of Americans have an accurate estimate of how massive U.S. water infrastructure is. America boasts more than 2.2 million miles of water and wastewater pipes, most of which are buried and invisible to those who rely on them. As such, about half (49%) presume that there are 1 million miles or less of water and wastewater pipelines nationwide. Approximately 30% estimate the size at 500,000 miles or less.

Americans are also unaware of just how old many of these pipes are. According to the survey, the average estimate of a pipe’s life is just 48 years. In reality, most are designed to last between 75 and 100 years. But with large portions of U.S. water infrastructure built between the end of the 19th century and post-World War II, many are nearing the end of their lifespan.

In 2021, American Society of Civil Engineers (ASCE) released a report citing a 27% increase in water main breaks between 2012 and 2018. Most Americans understand that pipe breaks are common, but they vastly underestimate how common they are. More than half (53%) put the frequency of breaks at about once every few hours. But the real figure is about one break every two minutes. This was correctly guessed by about 30% of respondents.

So many breaks mean a tremendous volume of lost water — approximately 6 billion gallons per year, or enough to fill about 9,000 swimming pools. This, too, was underestimated by survey respondents, with nearly 60% estimating losses in mere millions of gallons.

Fixing this problem is going to be far more costly than most Americans realize. The Bipartisan Infrastructure Law allocated $50 billion to improve the nation’s drinking water, wastewater, and stormwater infrastructure. This is less than 40% of the total amount needed to get the country’s distribution lines up to “good operating standard,” which is estimated to cost $129 billion. (Not to mention the fact that only a portion of this money will go to distribution; much of it will be spent on treatment systems and other aspects of the water system.)

Still, from the perspective of many Americans, $50 billion should be sufficient. After all, 56% of respondents to American Water’s survey said that such improvements would cost $1 billion or less.

This underfunding represents a serious challenge. In 2019, ASCE calculated that, on the U.S.’s current investment path, there could be a $434-billion gap between actual expenditures and investment needs by 2029. This could lead to service disruptions, costing water-reliant businesses $111 billion and resulting in a cumulative $378 million in healthcare costs.

Threats To Our Water

The U.S. water industry face a number of ever-present threats and challenges, which professionals and municipal officials are constantly struggling to keep up with and adapt to. But many Americans have no idea just how many threats there are to safe drinking water and effective wastewater treatment. For example, 64% of survey respondents did not know that cyber-attacks are a prevalent danger for water utilities. Similarly, 62% were unaware of the risk posed by possible supply chain disruptions.

While most Americans do not have control over those kinds of threats, there are several that they can control and mitigate were they aware of them. Among respondents, 45% did not know that flushing wipes (even those labelled “flushable”) pose a risk to wastewater infrastructure. A similar proportion — 43% — were also unaware of the risk of flushing cotton products. Pouring cooking oil and grease down the kitchen drain can cause harm to pipe conditions, although 38% of respondents were unaware of this.

A surprising number of Americans don’t even realize the risk posed by the age of the country’s infrastructure. More than one quarter (27%) of respondents admitted they did not see aging infrastructure as having a negative impact. Among younger respondents (ages 18-24), that figure was 44%.

What Should Utilities Do?

Water treatment plants (WTPs) and wastewater treatment plants (WWTPs) may be dismayed at the severe disconnect between Americans’ presumptions about water infrastructure and reality. However, there are things that they can do to help close the gap of understanding. Short of trying to get comedian John Oliver to do a segment on the topic (as he has on PFAS and drought), plants can offer site tours and host community forums. They can also distribute information both in print and via social media and other online channels.

Americans rely on clean water for every aspect of their lives. Clearing up these misconceptions can help them appreciate just how much money, time, and effort is spent to keep it flowing.

Christian Bonawandt is an industrial content writer for Water Online. He has been writing about B2B technology and industrial processes for 22 years.