Minnesota's Nitrate Problem Is Getting Worse 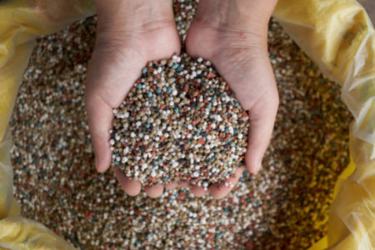 Nitrates are naturally occurring compounds that find their way into drinking water via groundwater in several benign ways. But when elevated levels of nitrate are found in water supplies, usually the result of runoff from agricultural operations, treatment plants should be on alert as consumption can lead to health problems.

“Some 115 Minnesota community water systems — mostly in the southeast, southwest, and central regions of the state — had ‘elevated’ nitrate levels,” City Pages reported. “That means at or above three milligrams per liter, not yet at the five milligrams per liter associated with risk of birth defects and other health problems, but high enough to start paying attention.”

While more than a third of the tested communities’ nitrate levels went down during the study, 72 communities experienced a rise in nitrate levels. Of those, the average nitrate contamination in drinking water rose by 61 percent.

“It is clear that in most places with the most serious contamination, the problem is getting worse,” EWG found. “Of the community water systems where nitrate exceeded the federal legal limit, fully 67 percent, serving about 48,500 Minnesotans, showed increased contamination over the study period.”

It’s unclear how exactly Minnesota will curb the issue, if it will at all. But local rulemakers are aware of the danger and have a potential fix in place.

“State officials know about this problem, and they’ve been trying to correct it with the Minnesota Groundwater Protection Rule, which went into effect at the beginning of this year,” per City Pages. “It bans laying down nitrogen fertilizer in vulnerable areas when the soil is frozen, and therefore more likely to let the chemicals slide right off and into nearby groundwater. It’s supposed to keep nitrate levels from exceeding 10 milligrams per liter, which is the Environmental Protection Agency’s legal limit.”

Hopefully, this effort will at least limit the rise in nitrate levels and the number of communities affected. Ideally, Minnesota will see a reduction in its nitrate problem in every water source across the state.