Matt Damon Wants You To 'Buy A Lady A Drink' 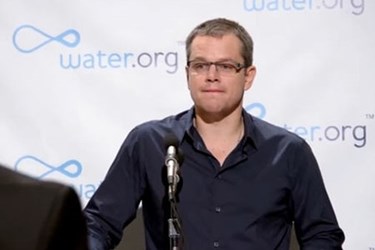 Oscar-winner and A-list actor Matt Damon was at the Sundance Film Festival recently, and he used the platform not to announce his next movie role, but rather his latest initiative as co-founder of Water.org.

Damon, fellow co-founder Gary White, and beer-makers Stella Artois have launched “Buy a Lady a Drink,” which seeks to raise funds and awareness around water issues in the developing world.

The title of the social impact campaign refers to the time and effort it takes for women in poor, water-scarce countries to collect clean water for their families — a combined 200 million hours per day, according to the organization.

The idea is to buy a specially-designed chalice through the website, and each sale will provide one person with up to five years of clean water. Watch the campaign promo below:

Damon is among the highest-profile celebrities to support the cause of clean water and sanitation around the world (Bill Gates is another), and he often turns to YouTube to spread the word. For example…

Damon’s take on the ALS Ice Bucket Challenge, which swept the country over the summer, included a twist — he opts for toilet water to pour over his head. “For those of you like my wife who think this is really disgusting, keep in mind that the water in our toilets in the West is actually cleaner than the water that most people in the developing world have access to,” he says.

In the following clip, Damon takes the comedic route to awareness, going “on strike” from using the bathroom. The message of clean water and sanitation is delivered alongside laughs, making it all the more effective and watchable (with over a million views).

Celebrities are often criticized for speaking from ivory towers, but sometimes they make good use of the pulpit. For his work that’s near and dear to the heart of every water and wastewater professional, we might even forgive him for Stuck on You.