Ten years ago, KLa Systems was presented with the challenge of finding a more wear-resistant material for our jet aeration nozzles and decided to upgrade to Kynar PVDF, which is extremely chemical and wear resistant.

This durable Kynar PVDF material is now available in our Slot Injector aerator. The Slot Injector™ aerator operates at even higher liquid velocities than a jet aerator.  We specify Kynar PVDF injectors to industries which have high TDS concentrations that over time can form scale which can be extremely abrasive.  The material is also very suitable for industries that use powder activated carbon (PAC) in their bioprocess which is regaining popularity for neutralizing the adverse effects of certain CIP chemicals.

In 2004 KLa Systems developed an application for the jet aerators in bio-solids treatment and quickly had 10 installations over a 3 year period.  The application was for both mesophilic and thermophilc aerobic digesters where the TSS concentrations were typically 3.0% and liquid temperatures varied between 37 and 55 degrees C depending on the application.  After several years of operation, some of the basins were taken out of service for routine cleaning and servicing.  This also allowed for inspection of the jets and piping system.  Contrary to the inspection results from traditional municipal and industrial installations, the inner jet nozzles were shown to have significant wear while there was no sign of abrasion on the outer jet nozzle. The cause of the wear was from grit and sand, which were present due to either no or ineffective/ outdated grit removal systems.

It should be noted that worn/eroded inner jet nozzles have a direct impact on the system oxygen transfer performance, as the increase in the diameter of the opening results in reduced motive liquid velocity which is the driving force at the gas/liquid interface in the outer mixing jet, and along the horizontal air/liquid plume exiting the jet.  Eroded inner jet nozzles can also adversely affect pump performance and energy consumption as the reduction in liquid pressure will force the pump to operate further to the right side of the performance curve.

Based on the amount of wear seen in a relatively short period of time, it was concluded that a move to a material that would have superior wear resistance over a wide range of liquid temperatures was required.  The eventual material chosen was Kynar PVDF which is a polyvinylidene fluoride, and is a purposely designed thermoplastic for industrial applications in harsh environments.  This material was already in use in water and wastewater applications due to its high corrosion and abrasion resistance.  Since moving to Kynar PVDF, inner jet nozzles we have monitored our systems and since 2008 have easily passed inspection and the jets have been described as in “like new” condition.  There are now more than 60 successful installations and KLa Systems has changed to the Kynar PVDF inner jet nozzles for all of our jet aerator applications. 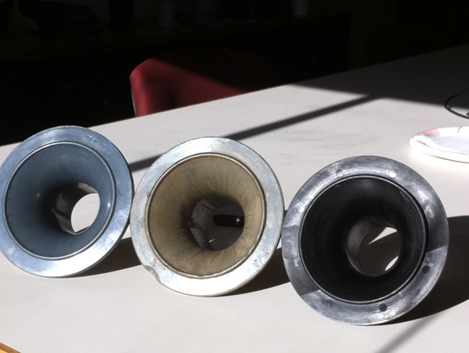