Is Water Odor A Challenge? 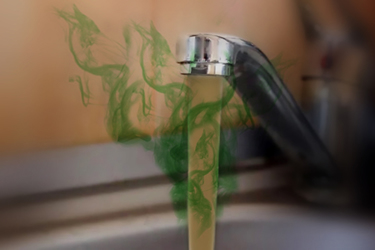 Turning your water tap on only to be encountered by a terrible stench is arguably one of the worst ways to start your day. Your immediate reaction may be to assume that your water supply is contaminated, but there are myriad reasons why your household water has suddenly developed a pungent odor.

Although bacterial activity is a common source of smelly water, it is not the sole explanation for foul odors and tastes. Changes in your water taste and smell could be because of chemical reactions, increased mineral traces, and rotting organic material. Let us look at some of the most prevalent water odors, what generates them, and how to eliminate them.

These bacteria flourish in an iron-rich atmosphere and obtain sulfur from decaying plants, rocks, or soil. Borewells and plumbing systems offer the perfect oxygen-deficient environments for these non-toxic bacteria.

It is worth noting that if you only encounter the odor when running hot water from the faucet or in the shower, it could be a chemical reaction taking place inside your water heater rather than in your water supply.

You may be dealing with iron bacteria in your water supply if you experience a gush of musty, earthy-smelling water while using your hot tap. Though these bacteria are not harmful, they can be inconvenient since they impart a terrible taste. You may even find slime in your toilet tank or other plumbing in addition to the foul smell and taste. When iron and oxygen mix, iron bacteria develop. The bacteria feed on the iron and generate slime. When the bacteria die, they emit an earthy stench.

Iron bacteria are found in water wells with high iron levels. Your water heater is typically the ideal growing habitat for iron bacteria due to its high temperature.

This odor generally indicates that water contains high concentrations of chloramines, barium, or cadmium. Chloramines are chlorine-ammonia compounds used to purify municipal water. While it is vital to eliminate toxic pollutants, it may leave your water with a pungent stench.

Barium and cadmium are naturally occurring metals that might enter your water on account of fertilizer contamination or decaying metal water delivery pipes and your metal plumbing pipes. Although it seldom indicates the presence of hazardous bacteria or pollutants, the stench is unpleasant regardless.

This smell indicates elevated amounts of chlorine in the water, similar to the smell in swimming pools. Households using municipal water are more likely to complain about water that smells like bleach as chlorine is added to public water manually to disinfect it. The chlorine concentration in water is likely to be higher in homes closer to a distribution facility.

Although chlorine is deemed essential for municipal water treatment, once it reaches your home water supply it does not do much other than cause excessive dryness to the skin and give your water a nasty taste and smell.

The stench of sewage in water is an indication of the accumulation of bacteria in the metal pipes. If it comes when turning on the hot tap only, then it would be on account of your water-heating system running at a low temperature or switched off for an extended period. This emits hydrogen sulfide, hence the smell.

The presence of germs from food, soap, or other items sitting in your drain may also be a contributor to this. When the water runs into the drainpipe, the bacteria produce a heavy gas, which rises upwards and into the air around the sink, giving the impression that the water itself stinks.

Smells of hydrogen sulfide can be detected at concentrations as low as .5 parts per million. It will smell musty at 1 PPM and like rotten eggs at 1-2 PPMs.

How Can You Avoid Such Smells?

Now that you have a list of the most common smells and the various causes behind them, the next step is to investigate which part of your water system is malfunctioning.

The problematic areas can be many; it could be due to the pipes — metal pipes make for a perfect breeding ground for bacteria, faulty purification systems, faucets, borewells, etc.

The next step is to identify a suitable remedy to end the foul smell in the water — an essential step since the same remedy does not work to eliminate all odors.

When it comes to treating iron bacteria, a chlorine chemical feed system is a credible solution. Chlorination systems, combined with a water-holding tank for adequate 'bacteria kill time', can efficiently decrease bacteria and aid in the oxidation of iron for optimal filtering. Reverse osmosis (RO) water filters successfully remove contaminants such as chloramines, barium, or cadmium from the water supply. Carbon filters also assist in enhancing the odor and flavor of the water, ensuring that you always have clean, pleasant water.

While these and other similar methods appear to be ideal for dealing with foul water, they are only transient and require persistence.

Furthermore, since they address only one element at a time, they offer no assurance that they will prevent additional chemicals from causing the same stinky water issue.

The ultimate, long-term solution to end this problem once and for all is to eradicate metal pipes in the water supply system. High-quality uPVC pipes provide an alternative to metal pipes — an expensive proposition, but one that needs to be factored in by municipal corporations across the world.

uPVC pipes from a reputed manufacturer are sturdy and made with top-of-the-line raw materials, proper quality checks, and processing parameters that promise problem-free functioning for over 60-plus years. uPVC also ensures freedom from the nuisance of corrosion or other chemical imbalances (pH levels, emission of gasses, etc.), reduced breakdown, and lower maintenance costs for water supply systems.

Of course, this may seem a drastic step when compared to the other solutions that appear more feasible or less time-consuming; but if the goal is to put an end to the problem of smelly water for good, then this is the answer.

Sarth (Saumya) Jain took on the helm of Vinyl Tubes Private Limited, one of the most trusted brands in uPVC pipes, as Principal Partner in 2013. Aligned to the company mission of getting drinking water to as many as possible, he set out to position Vinyl Pipes as one of the largest suppliers of uPVC pipes in the world.