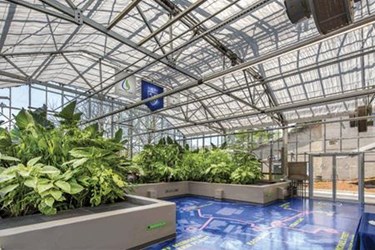 The award-winning WaterHub at Emory University is more than a mere campus treasure — it has become a model of sustainable wastewater treatment for urban water management of the future.

The WaterHub at Emory University is a decentralized, on-site urban water reclamation and reuse facility that implements a holistic approach to modern water management. Through innovative technologies, the ecologically engineered reclamation facility treats up to 400,000 gallons daily, recycling up to two-thirds of the university’s wastewater production, while reducing the campus water footprint by nearly 40 percent.

By localizing water supply through on-site reuse, Emory University has greater control over supply, water quality, and campus resiliency. Nestled among the trees and green spaces of Emory’s campus resides a wastewater reclamation and reuse system that is changing the paradigm of commercial-scale water management.

A Quarter Century Of Water Stressors
Throughout history, water has remained the single thread that has brought us all together. From the aqueducts of the Romans to advances in agricultural irrigation, water remains a vital resource for every community. Recently, though, our newspapers have been topped with headlines of water-related challenges in almost every corner of the globe. No stranger to its own water-related challenges, Emory University sought to reduce its dependence on municipal water and de-risk the campus from future water challenges.

Located only 15 minutes from downtown Atlanta, Emory University lies within one of the smallest watersheds serving a metropolitan area of its size. Water is becoming increasingly limited, with scarcity exacerbated by revolving drought conditions and political stressors over water rights. In a 25-year dispute known as the “Tri-State Water Wars,” Georgia, Florida, and Alabama have been vying for the allocation rights of water withdrawals from the Chattahoochee River Basin, which serves the Atlanta metro area.

Further compounding these challenges were the U.S. EPA’s issuance of consent decrees against the City of Atlanta (and the surrounding counties) to improve water and wastewater management and resolve issues related to combined sewer overflows (CSOs). Due to these new federal mandates, water and wastewater utility costs skyrocketed between 2007 and 2012 and are now considered some of the highest rates in the country. Consequently, sustainable water management has become a critical challenge for the region and a specific operational focus for large water consumers in the metro Atlanta area.

Emory University has a significant water footprint, using close to 350 million gallons of water annually with over 50 percent of campus water use considered non-potable demand. The university has five major chiller plants and one steam plant that provide critical heating and air conditioning services to the campus. Together, these six utility plants consume 30 percent of the total campus water supply, or approximately 105 million gallons annually. From these challenges, Emory began to deploy water conservation campaigns beginning around 2005, successfully implementing rainwater collection and storage, installation of low-flow fixtures, urinals, and shower-heads, and capturing graywater for reuse in toilet flushing.

The university had significantly decreased total potable water use, but the magnitude of the stresses and challenges dictated a more strategic and impactful water management solution. Subsequently, Emory University found itself in a unique position to develop a water management strategy centered on wastewater reclamation and reuse.

Ecological Design For Strategic Water Management
The WaterHub is an adaptive, ecological water reclamation system designed to treat domestic sanitary sewage, mined directly out of the campus sewer system, and reclaim it for non-potable demands including heating, cooling, and toilet flushing. Commissioned in the spring of 2015, the WaterHub at Emory University is an eco-engineered treatment plant composed of innovative and proven biological treatment principles.

The 4,400-linear-foot distribution system seamlessly integrates into the campus framework while providing recycled water to the university’s three largest chiller plants, the campus steam plant, and toilet flushing in residence halls. Designed to accommodate future expansion and increased non-potable demands, the WaterHub is expected to save 70 million gallons during its first year of operation, with future uses also including irrigation at major athletic fields.

The system allows flexible site integration, a compact footprint, and a natural aesthetic conducive to a dense urban setting. The WaterHub is divided into two locations: the upper site and lower site. At the upper site, performance landscaping allowed previously undevelopable space to become home to a 3,200-square-foot greenhouse, or “glasshouse,” containing a hydroponic treatment system. Considered the heart of the system, the glasshouse showcases lush, tropical plant life that emerges from wastewater reactor tanks. Attached to the glasshouse is a mechanical room and a fully functional lab space where operators can monitor the system.

The lower site, located across the street, includes outdoor hydroponic reactors, a demonstration reciprocating wetland system, and a 50,000-gallon clean water storage tank. Because it’s covered with native plants, nearby pedestrians may not realize this is a wastewater treatment plant, but beneath the surface is a highly engineered reclamation system.

Water Treatment: Enhancing A Natural Process
The WaterHub is a low-energy/high-efficiency, eco-engineered treatment system that utilizes a number of sustainable features, including passive heating, collection of stormwater run-off, photovoltaic panels, and efficient, condition-responsive controls. From sewer mining to reclaimed water supply at individual utility plants, the WaterHub is highly automated with a master control system integrated into all aspects of the treatment plant operations.

The WaterHub system is currently rated at a hydraulic capacity of 400,000 GPD, with expansion capabilities up to 600,000 GPD. Overall system design includes integrated fixed-film activated sludge (IFAS) hydroponic reactors in conjunction with a moving-bed bioreactor (MBBR) as primary treatment. The hybrid hydroponic-MBBR system enables the treatment of large volumes of wastewater with a relatively small physical footprint. The entire process, from wastewater extraction to distribution, requires approximately 14 hours.

A below-grade diversion manhole and pump station, at the lower site, intercepts wastewater from a municipal sewer collector. The station pumps wastewater to the glasshouse (upper site), where it passes through a rotary screen to remove any large solids or trash entrained in the wastewater. From the rotary screen, raw wastewater flows into primary treatment reactors, which include a series of MBBRs able to operate selectively as anaerobic, anoxic, or aerobic. The sealed MBBRs, with access through airtight hatches, vent all gasses through activated carbon air filters — eliminating virtually all odors from the primary treatment process.

Hydroponic reactors follow the primary MBBRs and are located within the upper site glasshouse. These reactors reduce remaining biochemical oxygen demand (BOD) to secondary levels and complete the nitrification process. The surface of the hydroponic reactors is covered with vegetation supported on plant racks. These reactors are aerated with fine bubble diffusers, which provide the oxygen required for treatment and keep the tank contents mixed. The roots of the vegetation provide ideal surface area for fixed-film growth.

By utilizing a natural treatment approach, the WaterHub has significantly reduced energy demands when compared to other biological or membrane treatment systems. Natural systems exhibit an intrinsic ability to diffuse oxygen into the systems. This helps reduce the energy required for aeration, which is typically one of the most significant energy and cost factors in a wastewater plant. These efficiencies are also complemented by solar energy production via two large photovoltaic panels located on either side of the treatment plant. 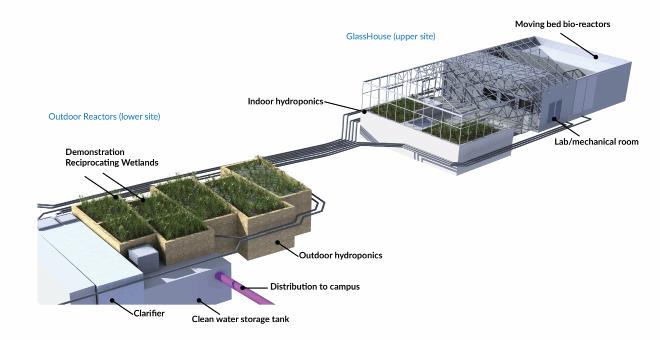 Strengthening A Campus Through Water Reclamation And Reuse
In addition to its functional use as a water reclamation facility, the WaterHub is designed as a living laboratory to enhance the university’s academic environment. The treatment facility fosters research in disciplines directly related to botany, microbiology, engineering, public policy, and urban planning, among others.

Emory’s Rollins School of Public Health and its Center for Global Safe Water are using the WaterHub as a teaching tool for students to have hands-on training in testing the treated water at various points in the facility. The Center is conducting research to test the feasibility of using the WaterHub in areas around the globe that face issues of water insecurity and are in need of decentralized wastewater treatment or reclamation solutions.

Overall, the WaterHub at Emory provides a number of environmental, social, and economic benefits to the university and broader community. Designed to de-risk campus operations from potential water service disruptions, the WaterHub at Emory University extends the lifespan of community water-related infrastructure. Additionally, the WaterHub has generated interest from diverse market sectors representing government agencies, higher education, and Fortune 500 companies. Professionals ranging from college professors to sustainability coordinators, engineers, and executive officers have traveled to the WaterHub for tours and presentations. Moving the field of water reclamation forward, the WaterHub serves as a model for commercial-scale sustainable water management in urban areas.

Recently, the eco-engineered water reclamation facility was recognized for its sustainable technology by the US Water Alliance. On April 8, 2016, the US Water Alliance announced Emory University and its WaterHub as one of three winners awarded the prestigious 2016 US Water Prize. This award recognizes organizations and companies that execute innovative solutions toward the advancement of “one water” sustainability.

In announcing the winners, US Water Alliance CEO Radhika Fox said, “While the challenges facing the water sector are great, our capacity of innovation and positive solutions is greater. That’s why the US Water Alliance created the US Water Prize — the first-of-its-kind recognition program that celebrates outstanding achievement in driving towards a sustainable water future.”

In response to the US Water Prize announcement, Emory stated “Through this project, [Emory has] shown how universities can play an important role in advancing sustainability nationwide. Not only has the WaterHub had tremendous impact on how we think about water and how it is utilized on campus, it has also become a national model for those seeking innovative technology to address the global need for water conservation and sustainable solutions.”

Matthew Early oversees a division of over 800 employees in departments of planning, design and construction, facilities management, finance and business operations, public safety, and customer relations and support. He is a professional civil engineer and a 1987 graduate of the U.S. Naval Academy in Annapolis, MD. He holds a Master of Science degree in Engineering, with a minor in Construction Management from the University of California- Berkeley, as well as a Master of Business Administration degree from the University of La Verne.