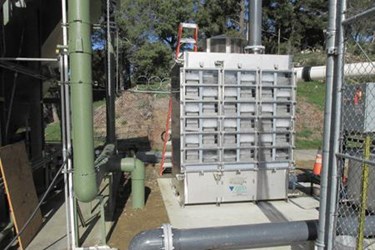 Though drinking water tends to be relatively clean compared with water that is being considered for other uses, it sometimes can contain contaminants. Air stripping, a proven water treatment technology primarily used in the past for groundwater remediation in highly contaminated sites, is gaining traction within the drinking water treatment industry. Air stripping has been proven to be highly effective for the removal of Volatile Organic Compounds (VOCs) and disinfectant byproducts (DBPs), as well as for pH adjustment through removal of dissolved CO2. It is gaining in popularity for the treatment of drinking water thanks to its efficiency, simplicity, and low cost per gallon in treatment, as well as its efficacy in helping to achieve finished water quality standards.

Drinking water sources have been designated as such because they have been deemed clean enough for human consumption. Of course, this does not mean that these water sources are clean enough for consumption without treatment; indeed, strict standards are in place across the U.S. to ensure proper treatment of water before it reaches consumers. The most important treatment targets for drinking water are biohazards, and so drinking water must be disinfected. Other important concerns addressed by drinking water standards are the presence of Volatile Organic Compounds (VOCs), disinfectant byproducts (DBPs) such as the carcinogenic trihalomethanes (THMs) left behind by the oxidation of organic materials during chlorine disinfection, and water pH. These concerns often result in violations of standards put forth by governmental regulations, particularly in small and medium-sized treatment plants.

Drinking water may come from either ground water or surface water sources, and each of these classes of water present their own challenges for treatment. In addition, a decade of near drought conditions in California and Texas have driven the implementation of water re-use approaches. Highly treated wastewater is now used to supplement and recharge some source waters for drinking use. If this water is used to recharge a groundwater source, it will have precursor organic levels closer to a surface water, leading to treatment needs that are somewhat of a hybrid of both types.

Groundwater tends to require less treatment than surface water; however, contamination (of VOCs in particular) from nearby sources like landfills or chemicals from manufacturing sites may leach through the ground into groundwater, thereby requiring increased treatment. Some groundwater may contain high levels of dissolved CO2, which causes increased acidity. This acidity can cause water to erode away protective coatings on pipes and increase copper and lead violations.

Surface water and reused water, on the other hand, are often more susceptible to precursor contamination like algae and other bio-solids. Like all drinking water, surface water and reused water require disinfection. Chlorination is the most common disinfection technique because it is inexpensive; however, chlorination can create potentially harmful DBPs that then require further treatment.

Air stripping, a water treatment technology proven to be effective for groundwater remediation in highly contaminated sites, is gaining traction within the drinking water treatment industry to address issues of VOCs, acidity due to dissolved CO2, and DBPs.

Fundamentally, air stripping removes or “strips” contaminants from water by contacting clean air with the contaminated water, causing the VOCs and other contaminants to move from the water into the air. There are three different major types of air strippers: towers, stacked trays, and sliding trays. Each of these have benefits and drawbacks, but all utilize the same basic mass transfer process of exposing contaminated water to clean air across high surface areas. This process is governed by Henry’s Law. The Henry’s Law constant (H) of any dissolved contaminant can be used to predict how effectively that contaminant will be driven from the water into the air. Some contaminants are of course easier to strip than others; for instance, dissolved gases such as methane and carbon dioxide strip easily, light hydrocarbons less so, and MTBE and ammonia are relatively difficult to strip.

Of the three different types of air strippers, sliding tray design strippers tend to have the greatest advantages and lowest costs. They are less prone to fouling, less intrusive at the site, provide a wider flow turn-down than tower strippers, and provide easier maintenance access and a smaller footprint than either towers or stacking tray designs. The main drawback is that they require a higher pressure blower than tower designs; however, this does not significantly add to the overall cost of operation when factors such as maintenance and materials are also considered.

All types of air strippers can be used for drinking water decontamination. The most clear-cut application in drinking water is in the removal of VOCs, including the THMs that are byproducts of chlorine disinfection.

Chlorine is most frequently used to disinfect drinking water, and existing regulations both limit THMs at the point of end use and require a “residual disinfection level,” or enough disinfectant to last through the entire system to the end point of use. The catch-22 is that residual disinfection can lead to the generation of additional DBPs even after final water treatment if precursor organics are still present. As a result, water treatment facilities must reduce the level of THMs enough so that any generated by residual disinfection do not push the final total over the regulatory limit. Air strippers can efficiently and effectively remove THMs to far below regulatory limits, thereby leaving enough “breathing room” for the generation of more THMs caused by disinfection during the water’s path through pipes to its end use point.

Another pressing issue in drinking water treatment currently, given nationwide news about lead and copper levels exceeding standards, is ensuring that the pH of water is within reasonable limits. Water, usually groundwater, with too much dissolved CO2 can be aggressive and therefore dissolve protective coatings on pipes and also dissolve the pipes themselves, leading to excess levels of lead and copper. By stripping the excess CO2 out of the water, plants can effectively increase pH and decrease levels of lead and copper at the point of end use.

Examples of air stripping in action

QED’s sliding tray air stripper, the E-Z Tray, was the first self-contained air stripper to achieve certification from NSF International to NSF/ANSI Standard 61: Drinking Water System Components – Health Effects. This particular design of air stripper has been employed in a variety of drinking water treatment facilities to address the issues described above at a low cost and with minimal impact to the facilities.

One such example is the U.S. Army Corps of Engineers – Omaha District-funded design and construction of a new groundwater treatment plant in Cheyenne, Wyoming. This plant was designed to treat groundwater from the city’s Borie well field, an important groundwater supply that was contaminated with a chlorinated VOC in the late 1960s at the former F.E. Warren Atlas Missile Site 4. In this application, a total of four, 6-level tray QED E-Z Trays, each with a treatment capacity of 1,000 gpm, were used in the plant design to insure that the TCE treatment goal of less than non-detection could be reached. The E-Z Tray units chosen for the Cheyenne treatment facility have more than enough capacity to handle the city water’s contamination load, with capacity to spare should any changes to the water’s contamination levels occur, and the plant operators have encountered no issues so far.

Another successful implementation of the E-Z Tray air strippers is in place at the Cedarburg, Wisconsin Light and Water Utility water treatment plant. The Cedarburg Water Utility installed a QED E-Z Tray Air Stripper to their existing production pump building. The E-Z Tray 72.6 handles a flow rate of 600 gpm and treats groundwater containing a chlorinated VOC traced back to a nearby landfill. The air stripper is meeting the goal of complete removal.

Cedarburg had been using a packed tower air stripper for 18 years to treat TCE at a different supply well location, but when the new contamination needed to be addressed, the plant operators began researching alternatives, as they had encountered issues with the tower at the other location. In addition, the plant in question is adjacent to a residential neighborhood and so the aesthetics of a tower would have been an issue. The E-Z Tray system was not only competitively priced and offered simpler maintenance, it also could be discreetly housed indoors.

Finally, QED supplied an E-Z Tray system to the City of Santa Cruz, CA for THM reduction in groundwater that had been partially recharged with treated, reused wastewater. The system was installed in late 2015 and has resulted in consistent THM reductions of 78-98%, with the system’s treatment cost per gallon far lower than alternative methods.

Air stripping technology has proven to be an effective process not just for groundwater remediation, as it has been used in the past, but also for the treatment of both groundwater and surface water sources of drinking water. Air stripping effectively removes VOCs, including DBPs such as THMs from chlorine disinfection, and dissolved gases like CO2 in the case of overly acidic water sources. In doing so, it reduces treatment costs over competing treatment options and ensures adherence to regulations. It is therefore an ideal treatment option for these sources of contamination in small and medium-sized drinking water treatment plants.