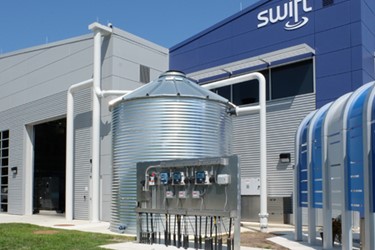 Since Henifin’s first sip in 2016, the project has continued to grow and in May, HRSD celebrated the opening of a $25 million research center located on the grounds of Nansemond Treatment Plant in Suffolk, VA. The SWIFT Research Center is capable of producing up to one million gallons of SWIFT Water (water treated to meet drinking quality standards) daily. The SWIFT Water is treated to match existing groundwater and used to recharge the Potomac Aquifer.

HRSD is working toward obtaining approvals for construction of the first full-scale SWIFT facility in 2020, and estimates a 10-year construction schedule to fully build all facilities required to reach full-scale operations by 2030 and recharge the Potomac aquifer with more than 100 million gallons of SWIFT water daily by 2030. The system will include five facilities, with total output at each facility ranging from 9 to 45 MGD.

Henifin’s vision for the project reaches back to 2014, when HRSD considered the feasibility of a recharge. “We had done some long-range scenario planning and identified a need to find some regulatory stability,’’ he said. “Our analysis concluded that the regulations would continue to change as science continued to identify new concerns with wastewater, even at extremely low levels requiring near continuous treatment process changes that are expensive and disruptive to regular operations.  If we treated to meet drinking water standards, perhaps we would be better protected from future wastewater discharge regulations. “

Henifin said regulatory stability was the primary goal at the outset of establishing SWIFT. Nutrient reduction, sustainable groundwater supply, land subsidence, and creating a salt water intrusion barrier followed as additional goals. “Once we were seriously considering treating to drinking water standards, we needed to find a beneficial use for the valuable water we would be producing,’’ Henifin said. “That led to the idea that we should put it back into the already stressed groundwater aquifer.  Using the aquifer to redistribute the water to anyone in Eastern Virginia would eliminate the need to build expensive pipelines to move water to specific areas or customers.  We see this as a ‘wireless’ solution to water distribution.”

Other communities devised strategies for purifying wastewater. Henifin said SWIFT learned from projects in Orange County, CA, the Upper Occoquan region in Virginia, and even Singapore. “Singapore,’’ he said, “is leading the way internationally.”

The most significant early challenges came in trying to convince decision-makers to keep an open mind and to rely on the science behind the initiative.” We stressed the benefits but were clear about the challenges and that we would take a measured approach,” Henifin said. Those steps included pilot testing and demonstration scale (1 MGD) before moving to full scale production (more than 100 MGD by 2030).

The system works like this. Highly treated water from the Nansemond Treatment Plant is pumped to the research center’s advanced treatment facility. The water undergoes an 8-step process to prepare it for recharge of the aquifer.

Those steps include flocculation and sedimentation, which removes suspended solids by settling large particles to the bottom of the water column; ozone contact, which breaks down organic material and provides disinfection; biologically active filtration, which filters out suspended particles and pathogens and removes dissolved organic compounds through microbiological activity; and granular activated carbon contactors that remove trace organic compounds and prepares the water for ultraviolet disinfection, which is the next step and provides a barrier to pathogens by disinfection with high intensity ultraviolet light. The process concludes with disinfection through chlorine contact, additional small chemical doses to closely match the geochemistry of the water already in the aquifer, and, finally, sending it into a recharge well where the well conditions and surrounding aquifer water quality can be constantly monitored.

“One goal of this project is to treat without the large environmental footprint of membrane systems,’’ Henifin said. “The SWIFT Recharge is a first-of-its-kind treatment, recharge, research, and public education facility.”

The system revolves around a number of vaults and two underground pump stations. The vaults and pumps are protected by channel frame doors that prevent water and other liquids from entering the access opening. The doors are manufactured by The BILCO Company of Connecticut. There are seven doors protecting the valves and pumps in the sophisticated system, along with three LadderUP® Safety Posts, also manufactured by BILCO. The posts provide easier, safer access through floor doors, roof vents, and manholes. Two BILCO roof hatches were also used in the project. Marcor Associates of Midlothian, VA, delivered the doors, hatches, and safety posts.

If successful, the project could start to replenish an aquifer that serves about 500,000 households and thousands of industries. A report in the Washington Post said so much water has been pumped out of the aquifer that land is falling four millimeters per year over the past five decades. The project will fight sea level rise by reducing the rate at which land is sinking in Hampton Roads.

“There are many elements that can be applied in other areas, but for the most part, SWIFT requires some geological features to be fully successful that are location-specific, a confined, thirsty aquifer being the primary requirement,’’ Henifin said. “But large-scale success with a carbon-based process — eliminating the need to deal with a waste brine stream — opens the possibility of recycling wastewater throughout the country.”

Thomas Renner writes on construction, building, manufacturing, and other trade industry topics for trade publications in the U.S. and Canada. He can be reached at trenner@catalystmc.com.