This article is the fourth in a series on industrial water treatment focusing on inorganic contaminants. While regulatory limits are being established, the process of identifying a cost-effective treatment process should be undertaken. Potential water treatment processes for inorganic contaminants can be grouped into three categories: physical, chemical, and biological. This article will describe five chemical treatment technologies that may be considered:

Hydroxide precipitation is the simplest and most common method for metals removal. An alkaline agent such as lime is used to increase the pH to where metals solubilities are below the discharge limits.  Either hydrated lime (calcium hydroxide or Ca(OH)2) or pebble lime/quicklime (calcium oxide or CaO) may be added. Pebble lime is less expensive than hydrated lime but requires a slaker, which hydrates the lime in an exothermic (heat-generating) reaction. Long-term operations requiring relatively high lime usage (1 to 2 tons/day or greater) generally justify installation of a slaker to utilize less-expensive pebble lime. The lime precipitation process at the Central Treatment Plant (CTP) on the Bunker Hill Superfund Site in Kellogg, ID, is shown in Figures 1 and 2. 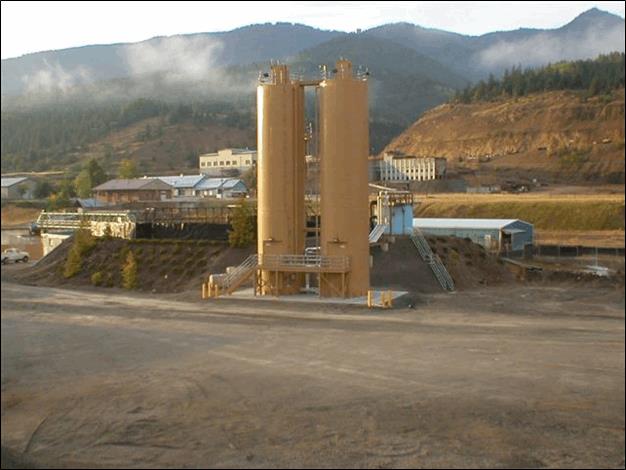 Figure 1.  Pebble lime silos in the foreground at the CTP 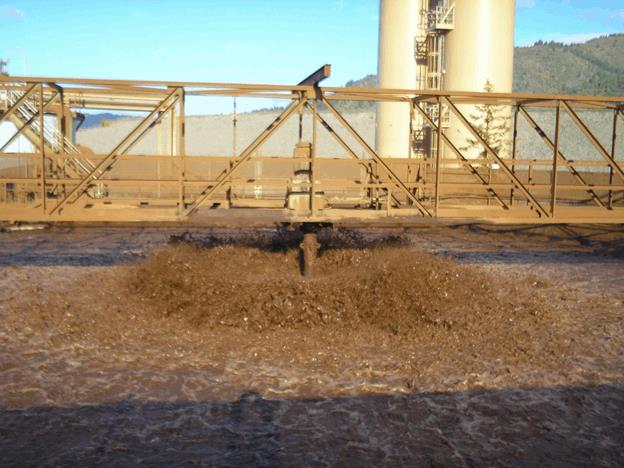 The pH target during hydroxide precipitation depends upon the contaminants of concern and their respective discharge limits. See Figure 3 for a chart of metal hydroxide solubilities versus pH. Iron precipitation requires a much lower pH than cadmium precipitation, for example.

Most metal hydroxides are amphoteric, i.e., they will go back into solution at higher pH, as shown in Figure 3. Therefore, removing several metals from solution may require a balancing act (a pH value between their lowest solubilities) or a two-step process. 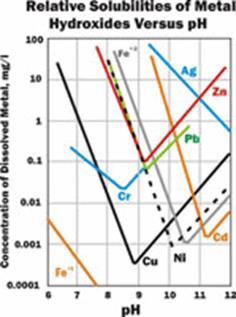 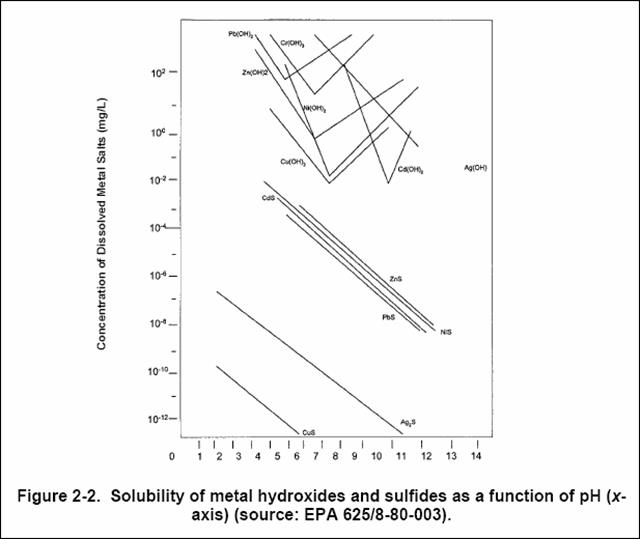 Oxidation/reduction reactions may be required to transform contaminants into less-soluble forms so they can be removed from solution. Oxidation is loss of electrons (e.g., oxidizing As3+ to As5+) while reduction is gain of electrons (e.g., reducing Cr6+ to Cr3+). Arsenic is typically oxidized from arsenite (AsO33- where arsenic exists in the +3 or trivalent form) to arsenate (AsO43- where arsenic exists in the +5 or pentavalent form). Oxidizing agents such as chlorine gas, sodium hypochlorite, hydrogen peroxide, ozone, or potassium permanganate are added to oxidize arsenic. Reducing agents such as sodium bisulfite or sodium metabisulfite are added to reduce contaminants such as chromium or selenium.  Hexavalent chrome is reduced to its trivalent form, while selenate (Se6+) is reduced to selenite (Se4+).

Like sulfide precipitation, oxidation/reduction reactions are typically quite rapid, with retention times on the order of minutes. One cautionary note is that chemical addition will increase the total dissolved solids (TDS) concentration due to addition of ions such as sodium. This may be a concern if a TDS limit must be met.

Ion exchange (IX) is a common technology for both potable and industrial water treatment. It is a physical/chemical process that is being grouped with chemical treatment technologies for this article.  A water softener, which is the most common ion exchange process, is shown in Figure 5.

Specific ion exchange resins are available for dissolved metals, arsenic, and nitrate. Sodium or hydrogen (depending on whether the resin is in the sodium or hydrogen form) are exchanged for cations (positively-charged ions such as most metals) that are removed. For anions (negatively-charged ions such as nitrate), chloride, or hydroxide ions replace the contaminants.

Several major resin manufacturers supply resin in the U.S. and internationally. Resin is relatively expensive initially (several hundred U.S. dollars per cubic foot) but can be regenerated for multiple uses.  On-site regeneration of cationic resins is typically done with acid or a sodium chloride solution, while a base or sodium chloride solution is used for anionic resins.

The waste created from IX regeneration is called regenerant and it contains the contaminants removed in a more concentrated form. The regenerant volume (gallons per day) depends on the regeneration frequency, which is dictated by the contaminant concentrations, discharge limits, and resin selectivity.  Either co-current or countercurrent regeneration can be used — each has its advantages. IX is a downflow process (Figure 5), so co-current regeneration will also be downflow while countercurrent will be upflow. Regenerant waste volumes are typically much lower than those for reverse osmosis (RO) or other membrane processes.  Typical IX resin capacities in kilograins per cubic foot (kgr/ft3) are:

New IX equipment at the Buckhorn Mountain Mine near Republic, WA, is shown in Figure 6. This was a four-step process, with each of the first three vessels containing resin specific to metals, arsenic, and nitrate removal, respectively.  The fourth vessel contained natural zeolites, which will be discussed next. 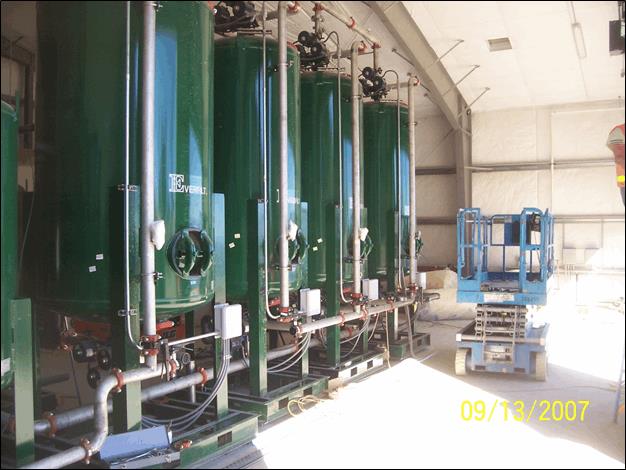 Natural zeolites are an inexpensive, readily available material that can be used to remove cationic contaminants such as ammonium and dissolved metals. Zeolite minerals include clinoptilolite (the material used in cat litter) and chabazite. Natural zeolites are far less expensive than IX resins, with typical costs of $0.10 to 0.40/lb.

Natural zeolites can be purchased in a variety of size ranges, such as 8x20 or 16x50 mesh.  Smaller material (higher mesh sizes) will have more available surface area and a higher adsorption capacity, but may impede flow. Chabazite is the most porous natural zeolite, with a surface area of 500 to 600 square meters per gram.

Similar to IX resin, zeolites can be regenerated with salt for repeated use. As an alternative, the material is so inexpensive that it can be disposed of when saturated with contaminants, typically as a nonhazardous waste. Valuable metals could be recovered from the regenerant or from smelting the spent zeolites. Full-scale treatment systems have achieved up to 0.4 percent thallium loading by weight at an influent thallium concentration of 0.6 mg/L, with higher loading possible at higher influent concentrations.

Chabazite is stable at pH values of 4 and above, while clinoptilolite is stable to a pH of 3.  Material bulk densities are 40 to 60 pounds per cubic foot.