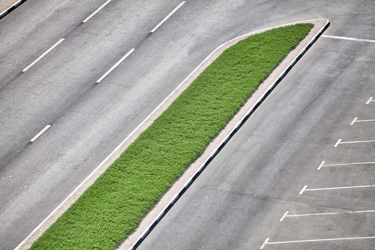 As water scarcity affects wide swathes of the U.S., water systems across the country have asked consumers to take measures like forgoing car washes, replacing grass lawns with dry-weather plants, and using low-flow appliances. Now, drinking water managers in Las Vegas are taking unprecedented action to try and curb the use of this vital resource by targeting city lawns that nobody uses.

The Southern Nevada Water Authority, which is responsible for providing drinking water in one of the nation’s most quickly growing yet water-deficient locales, figures that there are almost eight square miles of “nonfunctional” or “ornamental” turf in the Las Vegas metropolitan area. These would be areas of grass that require significant amounts of water, but that it sees as being largely unused because it stands in communal places like street medians or office parks.

“California imposed a temporary ban on watering ornamental grass during last decade’s drought, but no state or major city has tried to phase out certain categories of grass permanently,” per ABC10. “Regional water officials understand future consumption will have to be reduced but fear the preparation and perception could backfire if the community doesn’t buy in.”

The Southern Nevada Water Authority has tried extensive measures to curb drinking water use since at least 2003, when it banned developers from installing green front yards in subdivisions and started offering rebates to homeowners who removed sod. While some may feel that removing ornamental grass is a step too far in these measures, from a water conservation standpoint, it could appear as a logical next step.

“To be clear, we are not coming after your average homeowner’s backyard,” said Justin Jones, a local commissioner who serves on the water authority’s board, according to ABC10. “But grass in the middle of a parkway, where no one walks: ‘That’s dumb.’”