WWEMA Window: I Am Thankful For Water 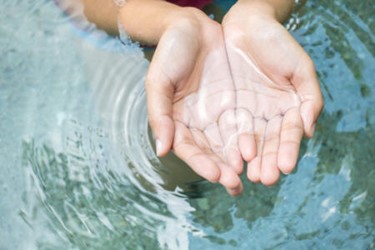 Having recently celebrated the Thanksgiving holiday, it is an opportune time to step back, take a deep breath, and consider all that we have to be thankful for. Whether it is family, friends, health, pets, or opportunities, each of us has something for which we are grateful. For me, I include water on that list. I was born in Puerto Rico, so I found myself surrounded by water from birth. As I grew up in Columbus, OH, I continued my fascination with water and the oceans, following the exploits and research of Jacque Cousteau and dreaming of becoming a marine biologist. Reality hit hard when a high school teacher informed me that the ocean was dead and I needed to find another career. Being land-locked in Ohio didn’t help matters either. Not to be deterred, I decided to major in Zoology with an emphasis in Aquatic Ecology at The Ohio State University (OSU). I figured it wasn’t the ocean, but the freshwater of the Great Lakes and other lakes and rivers around me could provide ample opportunity to find a career in water.

As an undergrad, I worked part-time for the U.S. Fish and Wildlife Service through the Fisheries Lab at OSU and contributed to research on growing and stocking sport fish for recreation in the state. That interest took a further turn as I transitioned to Aquatic Toxicology for my master’s degree. Still in Ohio, my world became the dank, dark, mucky bottoms of those rivers and tributaries that looked clean, but in fact housed sediments containing polynuclear aromatic hydrocarbons (PAHs) and other carcinogens that contributed to elevated cancer rates in brown bullhead and other bottom-dwelling fish species. I remember one day asking my professor why he always got to drive the boat and his response was, “Are you kidding? Have you seen my colleagues? They are all missing fingers and other body parts due to cancer from conducting this type of research.” I survived the muck and flooded waders, graduated, and vowed to continue my search for a career in water.

As luck would have it, the Ohio Environmental Protection Agency had an opening in their drinking water program. I got the job and thus began my more formal career in water. Back in those days, you could read the Code of Federal Regulations covering all the drinking water regulations in about a half hour and feel fairly confident you knew what they meant. Life was “simple” — total coliform, some inorganics and pesticides, and trihalomethanes. That is no longer the case. Over those succeeding decades when I moved to D.C. and was executive director of the Association of State Drinking Water Administrators and a principal at EPA’s prime contractor, the Cadmus Group, issues became far more complex and our knowledge base began to grow and expand with regard to emerging contaminants and the unintended consequences of changing treatment regimes without fully understanding the impact on water quality.

Today, we continue to deal with issues around lead and lead service lines, emerging contaminants, perchlorate, PFAS, microplastics, harmful algal blooms, and the list goes on. What is different is that our water industry has a much higher level of visibility. The regulations are also much more complex and potentially costly. From the equipment manufacturers perspective, we have the technologies, we just need them to be accepted and implemented. And we need space to innovate and develop new technologies to meet the drinking water and environmental needs of today and into the future.

Safe drinking water is still not accessible to everyone — even here in the United States. The US Water Alliance, in partnership with DigDeep and Michigan State University, just released a report on November 18 titled Closing the Water Access Gap in the United States: A National Action Plan. Through this research, they found that more than two million Americans live without access to running water, indoor plumbing, and safe sanitation. They found that communities of color are more likely to lack water access than white communities, and that the disparity is particularly extreme for Native Americans. Poverty is also a key barrier to water access. These challenges are the result of historical and geographical factors that have left entire communities without adequate services. It’s hard to imagine in a country like the U.S. that there are still many among us that lack safe water and sanitation.

So, today I am thankful for water and for all those people in the water industry who have spent lifetimes in the pursuit of safe water and a clean and healthy environment for us all. Thank you to those thousands of water professionals who gladly go to work each day because they know that the work they do benefits us all as individuals and as a society. Today I am grateful to everyone who has made their career in water.

Vanessa M. Leiby is the Executive Director of the Water and Wastewater Equipment Manufacturers Association (WWEMA). WWEMA is the non-profit trade association representing water and wastewater technology manufacturers and related service providers. Together we are working to shape the future of water and wastewater technology in the U.S. and around the world. For more information about WWEMA go to www.wwema.org.