Humans Drive Most Of The Ups And Downs In Freshwater Storage At Earth's Surface, Stanford Study Finds 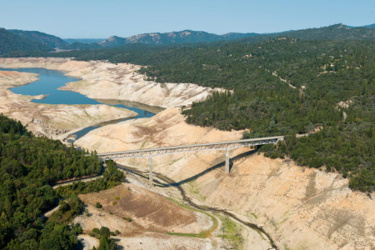 A new study provides the first global accounting of fluctuations in lake and reservoir water levels. The research shows 57 percent of the variability occurs in dammed reservoirs and other bodies of water managed by people, highlighting the dominant role humans now play in Earth’s water cycle.

Water levels in the world’s ponds, lakes and human-managed reservoirs rise and fall from season to season. But until now, it has been difficult to parse out exactly how much of that variation is caused by humans as opposed to natural cycles.

The scientists used 22 months of data from NASA’s ICESat-2, which launched in October 2018 and collected highly accurate measurements for 227,386 water bodies worldwide, including some smaller than a soccer field. “Previous satellites have not been able to come anywhere close to that,” said Cooley, who performed most of the analysis on a laptop, stationed on her parents’ couch, after coronavirus restrictions canceled her scheduled field season in Greenland. “I needed to find a project I could work on remotely,” she said.

Cooley and colleagues found that water levels in Earth’s lakes and ponds change about 8.6 inches between the wet and dry seasons. Meanwhile, human-managed reservoirs fluctuate by nearly four times that amount, rising and falling by an average of 2.8 feet from season to season.

The western United States, southern Africa and the Middle East rank among regions with the highest reservoir variability, averaging 6.5 feet to 12.4 feet. They also have some of the strongest human influence, with managed reservoirs accounting for 99 percent or more of the seasonal variations in surface water storage. “That’s indicative that these are places that are water stressed where careful water management is really important,” Cooley said. In some other basins, humans influence less than 10 percent of the variability. “Sometimes those basins are next to each other because even within the same region, a combination of economic and environmental factors mean humans make different choices about how to manage surface water storage.”

While water levels naturally rise and fall throughout the year, this seasonal variation is exaggerated in dammed reservoirs where more water is stored in the rainy season and diverted when it’s dry. “There are a lot of ways in which this is bad for the environment,” Cooley said, ranging from harm to fish populations to potential increases in emissions of methane, a potent greenhouse gas.

The implications of regulating water levels in reservoirs are not black and white, however. “A lot of this variability is associated with either producing hydroelectric power or irrigation. It can also be protective against flooding,” Cooley said. Human influence is generally stronger in more densely populated areas. However, sparsely populated areas with large hydropower dams, such as Northern Quebec and Eastern Siberia, are notable exceptions.

The new work offers an important baseline for future research, as economic development, population growth and climate change continue to strain water resources around the world, and as more satellites begin tracking human modifications to Earth’s water cycle. “Our ability to observe the water cycle is undergoing a revolution,” Cooley said. While the current study offers a 22-month snapshot in time, she said, it will soon become possible to use the same methods to understand year-to-year variability and to predict longer-term trends. “This is a first global quantification, but it won’t be the last.”