How To Protect Water Conveyance Systems From Transient Pressure 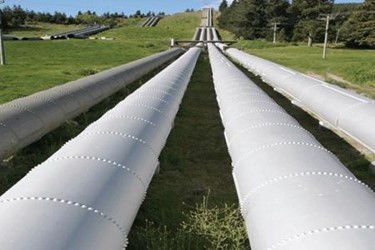 Is water hammer pounding your pipeline infrastructure into submission? Here are some tips for avoiding issues associated with hydraulic transients.

Flow conditions in a pipeline can be disrupted by many reasons, such as operational mistakes, poor maintenance, faulty instruments, emergency situations, etc. Sudden change in flow at a point in a system creates a corresponding change in water pressure, commonly termed as hydraulic transients or water hammer. These events occur in a very short period of time but have the potential to cause significant damage to pipelines.

Consider the example of a pumping system presented in Figure 1. As shown, pumps are withdrawing water from a reservoir and conveying it through a pipeline to a reservoir at a higher elevation. If a power outage happens, the pumps stop instantaneously, resulting in zero flow with the check valve closure. This creates a sudden drop in pressure downstream of the pumps, and the pressure wave propagates in the pipeline back and forth until it reaches a steady state. As a result, the hydraulic grade line (HGL) of the pipeline drops from its initial position and at some locations may reach below the pipe centerline, thus creating negative pressure in the system. Depending on the magnitude, the negative pressure may reach the vacuum pressure, which has significant pipeline structural and water quality implications, as low pressure can rupture the pipe material and cause intrusion of contaminated surface water or groundwater into the pipe at a leaky joint or break (Thorley, 2004). Depending on the size of the leak, the volume of intrusion can range from a few gallons to hundreds of gallons. The pipes are typically designed to withstand the full vacuum condition. However, the collapse of vapor cavities or rejoining of separated water columns can produce excessive high pressures leading to failure of pipes. Many authors (e.g., Boulos et al., 2005; Chaudhry, 2014) have reported catastrophic failure of pipelines resulting from accidental transient events.

The most widely used technique for solving transient flow equations is the method of characteristics.

Power trip is typically considered the most critical transient event that can occur in a pumping system. However, there are many incidents that can generate transient pressure in pipelines. For example, it can be initiated by poor system operation such as rapid closure or opening of a system valve, can be caused during pump startup, or by pipe breaks, earthquakes, or wear and tear of system components. Therefore, a hydraulic transient analysis covering the possible operational scenarios is a critical component in finalizing a pipeline design. Provision of surge-control devices should be considered to mitigate the transient events.

Method Of Analysis
Transient modeling softwares are commercially available for assessing the risk of transient pressure in a system. These one-dimensional models provide sectional average flow variables along the pipe length. The basis for any computer model to analyze a transient event in a fluid-carrying system is the numerical solution of the equations describing the conservation of mass and momentum. The most widely used technique for solving transient flow equations is the method of characteristics. Many computer models utilize this method to calculate transient pressure in a system. With the advancement of computational efficiency and time, the models are capable of providing solutions in a reasonable time. The programs may be used to simulate steady state and transient (unsteady) operations of liquid-carrying systems of pipes, valves, pumps, reservoirs, and surge control devices, some of which are discussed in the following section. The important boundary conditions for setting up a transient model are: a) fluid properties, b) pipe layout (length of pipe segments and the elevations of the joints between segments), c) geometric and material properties of pipes, d) pump characteristics and flow conditions, e) moment of inertia of rotating elements of pumps, f) closure/opening characteristics of valves, and g) water levels at upstream and downstream reservoirs.

Figure 1: Pressure drop in a pipeline due to sudden shutdown of a pump.

Increasing pump inertia
This option can help to minimize transient pressure due to pump shutdown events and is typically used for relatively shorter pipelines. This can be done by adding flywheels to the pumps. This option is not often used for longer pipelines, as it increases the power consumption for pump startup, and it may require more sophisticated switchgear.

A surge tank requires little maintenance and is considered a fail-safe option for surge control. However, the use of a surge tank sometimes can be inconvenient because of the requirement of large size.

Uncontrolled closing or opening of valves can produce significant transient pressure in the pipeline.

Vacuum breaker/ air valve
A vacuum breaker allows air to enter into the pipeline when the pressure head drops below the pipe. After the air is expelled and the pressure within the pipeline is positive, the valve becomes closed. In a transient event, this valve usually provides surge protection in the vicinity of local high points and for some distance on either side. In many pipelines, air valves are installed at frequent intervals for ventilation since the air bubbles in a system can cause unacceptable shock loads if they are trapped at bends, junctions, etc. Vacuum breaking and venting capabilities are often integrated in the combination air and vacuum valves. These valves can be used to serve three purposes: 1) rapid expulsion of air when filling the system, 2) rapid admission of adequate air when negative pressure develops, and 3) slow release of air bubbles at normal operations. Releasing air too fast during rejoining of water columns following a transient event could result in high pressure. Therefore, the air valves need to have a controlled venting mechanism.

Bypass lines
Installation of a bypass line around the source of transient can sometimes provide a cheaper alternative for controlling surge pressures in a pipeline. Islam et al. (2018) presented a case study where transient pressures due to turbine operations in a water distribution system are controlled by installing a bypass piping around the turbine. In that installation, a bypass valve is opened to counter the pressure rise following a load rejection event which closes the wicket gate. Similarly, the pressure drop due to load acceptance is minimized by closing a bypass valve around the turbine.

Controlled system operations
Uncontrolled closing or opening of valves can produce significant transient pressure in the pipeline. The risk of generating excessive pressure can be minimized by operating the valves at a controlled speed. A two-step closure or opening can be used to control pressure change. For example, during a valve closure event, the first 80 percent closure can be done rapidly, followed by a slow closure of the final 20 percent. The risk of generating excessive transient pressures during a pump startup can be reduced by starting one pump at a time against a closed or partially closed control valve.

M. Ashraful Islam, Ph.D., PE, is a principal hydraulic engineer at Alden Research Laboratory. He has 16 years of experience in numerical modeling of closed-conduit and open-channel flows. He specializes in the development and applications of transient and CFD models to investigate complex hydraulics in hydroelectric power plants, pump stations, water distribution pipelines, etc. He worked as a technical lead for over 50 numerical modeling projects. Islam is a registered professional engineer in the state of Washington.

Mizan Rashid, Ph.D., PE, D.WRE, is director of hydraulic engineering and a supervisory hydraulic engineer at Alden. He has over 25 years of experience in hydraulic engineering, numerical modeling including hydraulic transient analysis, physical modeling of hydraulic structures, project management, and leading hydraulic modeling teams. He has conducted physical hydraulic and numerical model studies of over 100 water and wastewater facilities including pump intakes, water and wastewater treatment plants, water conveyance facilities, pipelines, hydropower and fish passage and protection, and other hydraulic structures as a lead engineer, project manager, and technical adviser. Rashid has published over 30 technical papers in national and international peer-reviewed journals and conferences. He is a registered professional engineer in the states of Washington, California, and Texas.