Researchers examine the feasibility of treating hexavalent chromium — the carcinogen made famous by the movie “Erin Brockovich” — with strong base anion exchange (SBA-IX).

After initial monitoring, an MCL of 10 micrograms per liter (µg/L) of Cr(VI) triggers implementation of quarterly compliance monitoring at individual water sources or entry points to the distribution system after treatment. Compliance with the MCL is determined by a running annual average of quarterly samples. The new rule does not include a compliance implementation schedule and was technically enforceable as soon as the MCL was finalized. California’s existing 50 µg/L total chromium MCL is to remain in effect unchanged.

With five critical groundwater sources having Cr(VI) concentrations between 7 and 40 µg/L that would potentially be impacted by the new MCL, the Soquel Creek Water District (hereafter, District) proactively conducted a 2011 paper-based study considering technologies that might be best suited for Cr(VI) treatment at their wells. The screening process identified SBA-IX, potentially with spent brine minimization and handling. Two key factors that drove the process toward selecting SBA-IX were (1) the availability of nonhazardous regenerant brine discharge to the local sewer and (2) the high alkalinity of the groundwater. The availability of the sewer offered the potential of lower-cost disposal; however, high alkalinity could result in significant operational costs if a treatment technology requiring pH adjustment, such as weak base anion exchange, were selected.

For the SBA-IX testing, the primary goals were to compare and validate commercially available SBA-IX resin performance for Cr(VI) exchange capacity, regeneration quality, and frequency requirements. As with any SBA-IX application, the ability to manage the regenerant brine was a critical operational parameter. Bench- and pilot-scale testing investigated innovative brine management techniques including brine reuse and treatment methods to render the spent regenerant brine waste nonhazardous. The techniques investigated included treatment of the spent brine to remove Cr(VI) and other co-contaminants using single-use weak base anion exchange (WBA-IX) resin, chemical reductive media (CRM), and reduction/coagulation/precipitation with ferrous sulfate to sequester the Cr(VI).

To achieve the District’s research objectives, SBA-IX testing was conducted at bench scale, followed by on-site pilot-scale testing at the District’s San Andreas well site. Objectives for each testing phase are shown in Table 1. 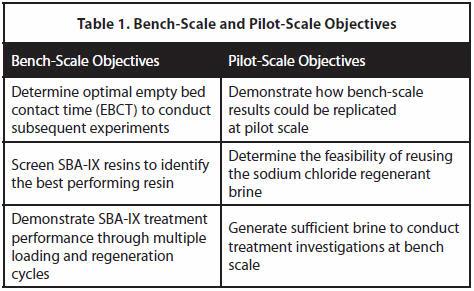 Strong base anion exchange is a process that involves the exchange of ions from one phase to another. It has been implemented by drinking water utilities with nitrate, arsenic, and other groundwater contaminants and, as such, has been researched extensively. During water treatment, negatively charged anions in the liquid or water phase are transferred to the solid phase of the resin by replacing anions, typically chloride, from the resin matrix. The SBA-IX process is shown schematically in Figure 1.

Raw water containing Cr(VI) is pretreated as required. Pretreatment typically includes prefiltration to protect the resin bed from particulate fouling. Since the functional groups of SBA-IX resins remain ionized over a wide pH range, there is not typically a requirement for pH depression for operation (Clifford 1990). Once pretreated, the water passes through pressure vessels containing SBA-IX resin where the Cr(VI) and other anions are exchanged for chloride. Following the ion exchange step, the treated water is typically disinfected, and if needed, pH adjustment and/or other stabilization may be performed prior to sending the water to the distribution system.

When the exchange sites are filled with contaminants, the resin is said to be exhausted and requires regeneration (Brandhuber et al. 2004). Regeneration is accomplished by using a 1.5 to 12 percent sodium chloride (NaCl) solution to impart a concentration gradient to replace the contaminant anions on the resin with chloride. Multiple bed volumes (BVs) of the regenerant are typically used to restore the exchange capacity (Siegel and Clifford 1988). 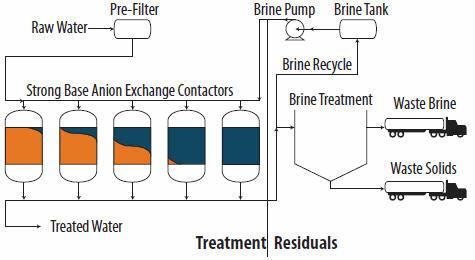 Waste brine quantity and quality characteristics (e.g., salinity, metals, and radionuclides) and geographical location can affect the feasibility and costs of these disposal options. Proximity and access to offshore disposal options, such as a brine line to the ocean, can also be significant factors in determining the burden of brine disposal. Without the ability to dispose of the brine in municipal sewers or via a brine line, the regenerant brine requires off-site disposal. This can be complicated, as it is likely to be designated as hazardous waste due to elevated concentrations of hexavalent chromium and other co-occurring contaminants.

Alternatively, the regenerant brine can be treated to remove the Cr(VI) rendering it nonhazardous. Siegel and Clifford (1988) conducted bench-scale experiments with different reductants to evaluate their ability to reduce Cr(VI) to Cr(III) and determine the optimal conditions for precipitation of Cr(OH)3(s). The results showed that acidic sulfite, ferrous sulfate, and hydrazine are all capable of reducing Cr(VI) to Cr(III); however, ferrous sulfate was the only reductant that did not require pH adjustment for the reduction reaction to proceed and did not require additional chemical feed to achieve precipitation. In laboratory studies, Cr(VI) recovery with sodium chloride regenerations of SBA-IX was always demonstrated to be less than 100 percent, which was attributed to Cr(VI) reduction to trivalent chromium with subsequent precipitation of a greenish solid (chromium hydroxide) (Clifford 1990).

Regenerant brine optimization has also been investigated for Cr(VI) treatment during pilot-scale testing conducted in Glendale, CA (McGuire et al. 2006). In that case, a regenerant brine with a sodium chloride concentration of 6 percent was found to be insufficient to fully regenerate SBA-IX, and the BV to breakthrough during treatment declined from 1,900 BVs with fresh regenerant to less than 500 BVs after the first recycle pass. Further treatment capacity reduction after subsequent regeneration cycles was also noted. Increasing the sodium chloride concentration from 12 to 26 percent improved performance; however, the Cr(VI) exchange capacity continued to diminish after subsequent cycles. In this instance, the diminished capacity was attributed to sulfate accumulation in the brine.

Soquel Creek Research Results
Research conducted with the Soquel Creek Water District’s San Andreas well proved that SBA-IX can be effective for Cr(VI) treatment. At bench scale, commercially available SBA-IX resins were able to achieve 15,000 to 30,000 BVs of treatment prior to an 8 µg/L treatment threshold. SBA-IX operating in this fashion is extremely efficient (greater than 99.97 percent water-efficient), especially when compared to its use for nitrate removal where resins are typically regenerated after only 500 to 1,500 BVs. While some diminished capacity was observed, performance generally appeared to stabilize after the initial loading cycles. Regeneration of the resins at bench scale showed that the Cr(VI) could be recovered from the resin with mass balances showing 76 to 106 percent recovery of the Cr(VI), with the variability likely due to sampling and analytical limitations.

At pilot scale, the exceptional loading capacity of the initial loading cycle was replicated, but without the subsequent diminished capacity experienced at bench scale. This reduced capacity observed at bench scale may be the result of irreversible fouling of the resin that occurred when the feedwater became contaminated with organic material. Regardless, there was no discernible performance decrease of the SBA-IX resin after five loading and regeneration cycles.

The feasibility of direct brine reuse was also proven at pilot scale. Regenerant brine was used eight times consecutively at pilot scale with each of the reuses yielding loading cycles of at least 15,000 BVs prior to 8 µg/L Cr(VI) breakthrough. A caveat to this is that there is extended leakage of total chromium, which is illustrated in Figure 2 by the rise in the “floor” of the breakthrough curve. While not explicitly clear from the data, it is speculated that this rise results from an accumulation of co-contaminants in the brine. The pilot-scale testing also effectively generated sufficient volumes of brine for subsequent bench-scale brine treatment testing. 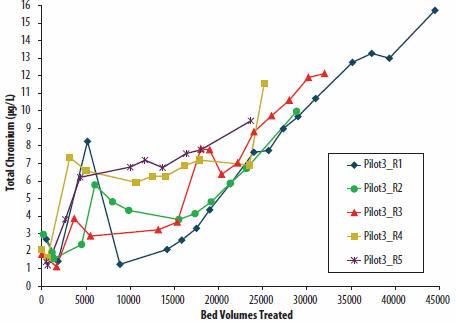 While SBA-IX is incredibly efficient for Cr(VI) removal when compared to other contaminants (e.g., nitrate and arsenic), the biggest challenge and operational cost of the process remains management and disposal of resulting regenerant waste brine. All of the brine generated at pilot scale would be designated a hazardous waste based on the total chromium concentration (> 5 mg/L). Traditional regeneration approaches typically use three to five bed volumes of an approximately 12 percent sodium chloride solution to regenerate the SBA-IX resin. Removing the chromium and other hazardous constituents from the brine increases disposal opportunities and lowers the associated cost of brine disposal. Three technologies were evaluated as means to treat the chromium-laden brine: reduction/coagulation/precipitation with ferrous sulfate, WBA-IX, and CRM. While each technology is capable of removing chromium below the hazardous threshold, reduction/coagulation/precipitation with ferrous sulfate appears to be most promising. If a utility does not want to manage the chemical feed systems required for reduction/coagulation/precipitation, a flow-through column-based approach with CRM may be feasible.

Conclusions
The ability to effectively manage brine production and disposal is crucial for the long-term viability of SBA-IX treatment. The results from this project suggest that direct brine reuse is feasible and that Cr(VI) can effectively be removed from the brine solution by either reduction/coagulation/precipitation or CRM. While optimizing the regeneration process was not fully investigated in this project, simple strategies such as decreasing and optimizing the brine strength and volume could provide significant operational cost savings and should be further investigated. More complex strategies, such as segregated regeneration, where the highly concentrated portions of the regenerant are removed from the bulk solution prior to reuse, offer the possibility of significantly reducing the volume of brine requiring disposal.

The project findings confirmed SBA-IX as the best available treatment technology for the District, and the success of the regeneration studies prompted the District to construct the first SBA-IX system specifically for potable Cr(VI) treatment in California. This 1,000-gpm IonexSG system is being used as a stopgap treatment measure while the District completes the design and construction of permanent treatment facilities, which are anticipated to be operational in 2018. Utilizing this process has the potential to reduce the overall volume of brine for disposal by nearly an order of magnitude, thus reducing the overall cost of the SBA-IX Cr(VI) treatment.

Mary Smith is a research manager at the Water Research Foundation and has 14 years’ experience in the drinking water industry, working primarily in distribution systems, emergency planning, and hexavalent chromium removal. She holds an MS in Environmental Science and Engineering from the Colorado School of Mines.

Craig Gorman, PE, Corona Environmental Consulting, has more than 11 years of experience leading treatment technology selections; bench-, pilot-, and full-scale evaluations; and cost-estimating and design efforts for inorganic contaminants. He holds an MS in Civil Engineering (University of Colorado at Boulder) and a BS in Environmental Science (State University of New York at Plattsburgh).

Taj Dufour, PE, is the engineering manager/chief engineer for the Soquel Creek Water District. He holds a BS in Mechanical Engineering from Cal Poly in San Luis Obispo and a grade D-4 Water Distribution Certificate and a grade T-3 Water Treatment Certificate issued by the California Department of Public Health.