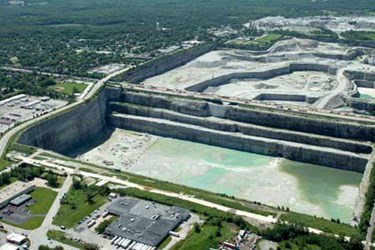 This summer’s achievements were an added layer in the grand process of water treatment for the billions of gallons of water that pass through MWRD facilities every year and a momentous occasion in the long-term quest to protect water along the Chicago Area Waterway System (CAWS), an attraction that is drawing unprecedented demand.

In July, the MWRD introduced disinfection via chlorination and dechlorination to its treatment process to reduce the amount of pathogenic bacteria in the water released from the Calumet Water Reclamation Plant (WRP) into the Calumet River system. The Calumet WRP serves more than one million people in a 300-square-mile area covering the south side of Chicago and surrounding south suburbs. In operation since 1922, the Calumet WRP is the oldest of the MWRD’s seven plants. Calumet WRP treats an average 354 MGD and a maximum 480 MGD, enough to fill every floor of Chicago’s Willis Tower. Using an existing chlorine contact chamber retrofitted for more efficient contact, the disinfection technologies neutralize or kill bacteria and other micro-organisms in treated water. The goal is to improve water quality and reduce health risks resulting from contact with the water.

“I appreciate the ingenuity that went into this project from staff at the District and the investment made by our area leaders who made this possible,” said U.S. Senator Dick Durbin. “Together, we have chosen to make our waterways a priority and take an important step in making our goal of a cleaner environment a reality.”

The road to the Calumet WRP ribbon-cutting ceremony began in 2011, when MWRD officials instituted an internal blue ribbon task force to evaluate available disinfection technologies. The task force devoted eight months to research and testing to determine optimal solutions for disinfecting at the lowest cost. On March 1, 2012, the most cost-effective processes were determined to be chlorination/dechlorination for Calumet WRP and UV disinfection with low-pressure high-output lamps for O’Brien WRP in Skokie, IL.

Adding The Final Chapter
Disinfection occurs after wastewater passes through a series of treatment processes. Primary treatment consists of removing any large material by physical means, including screening debris. Water then flows into chambers where heavy solids, such as sand and grit, sink to the bottom. The water then moves to settling tanks, and a significant portion of the organic solids settles to the bottom, while fats, oils, and grease (FOG) rise to the top. FOG is skimmed from the top, and the untreated solids are scraped from the bottom of the tank and treated further.

MWRD was able to do what was needed for less than half the cost of the original estimate.

With the “settle-able solid” material removed, the flow proceeds to secondary treatment. During secondary treatment, a large population of micro-organisms consumes the remaining dissolved organic material. The water flows through a series of large rectangular aeration tanks that are seeded with bacteria and other microbes. Filtered air is pumped through the liquid to enable the microbes to breathe and grow. The microbes flourish and multiply, eating the remaining organic materials and nutrients in the constantly churning water. This mixture of microbes and water flows into a secondary settling tank. The microbes clump together and settle to the bottom of the tank where they become part of the organic residuals and are removed. Approximately 85 percent of these microbes are recycled to the start of the aeration tanks to continue the biological treatment process.

Lastly, the new disinfection process will work to destroy any remaining bacteria in the water. Engineers modified the existing chlorine contact basin by replacing all interior baffle walls and associated walkways; replacing weir gates, discharge gates, drain sluice gates, inlet sluice gates, and a bypass sluice gate; replacing liquid sodium hypochlorite diffuser piping; installing liquid sodium bisulfite diffuser piping; and installing sampling pumps. During this last stage of treatment, the water flows through a labyrinth of tunnel-like passages in the concrete contact basin, allowing time for the chlorine to kill off the harmful pathogens. The water is then dechlorinated and empties into the nearby Little Calumet River.

The reclaimed water has more than 99 percent of the impurities removed and is deposited into the Little Calumet River and CAWS without any adverse environmental impact. The treated water is often cleaner than the water of the rivers and streams. The entire process from the time water reaches the treatment plant to the time it is cleaned and reclaimed takes less than 12 hours. In addition to directly benefiting the water environment, the disinfection project impacted the local economy by putting hundreds of tradespeople to work. 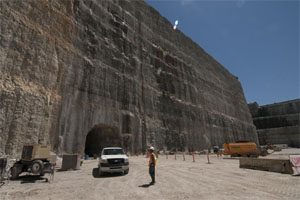 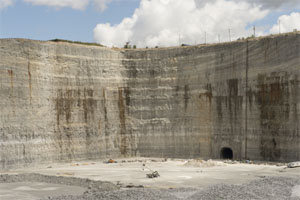 The above images show the massive scale of the Thornton Reservoir.

Disinfection also clears the way for direct reuse of the water by industry. MWRD has entered into an agreement with Illinois American Water, and together they are pursuing the local industrial use of this disinfected water. Other environmental benefits of reusing water include saving the energy used to treat the water and conserving Chicago’s tap water, which is sourced from Lake Michigan.

“Disinfection marks another significant date in the history of the Metropolitan Water Reclamation District of Greater Chicago, dating back to 1889, when the District was first tasked with addressing the issue of contamination in Lake Michigan,” said MWRD President Mariyana Spyropoulos. “Since then, we have constructed more than 60 miles of canals, reversed the flow of the Chicago River, and built seven water reclamation plants. Creating a disinfection facility at Calumet is another chapter in our history of water treatment and one more upgrade we have made to improve the region’s water quality.”

Two Forks Merge
Chlorination/dechlorination is not the only resource recovery initiative the MWRD is pursuing. The MWRD is also constructing a UV radiation system to disinfect water entering the CAWS at the O’Brien WRP. By using two distinct technologies, the MWRD will saturate the CAWS with disinfected water that enters the waterways from the south through Calumet WRP and the north at O’Brien WRP.

The UV disinfection system will become the largest wastewater UV installation in the world. O’Brien WRP, which treats 530 MGD, will have 1,152 TrojanUV Solo Lamps installed. The TrojanUVSigna system uses 1,000-watt low-pressure high-output (LPHO) Solo Lamps. The low-pressure lamp means that fewer lamps are needed to accomplish disinfection versus medium- pressure (MP) lamps. Fewer lamps require less tank volume, which translates into a lower capital cost than MP lamps. The low wattage of operation translates into longer lamp life and lower power consumption. The total power requirement for the traditional MP UV lamps to disinfect a 530 MGD effluent flow at the O’Brien WRP is 5,068 kW versus 1,191 kW for the Solo Lamps. The significant difference in power means a lower annual operating cost for the MWRD system.

The smaller number of lamps for the TrojanUVSigna system than the MP system also translates to reduced maintenance costs due to fewer lamps needing to be cleaned and replaced. The inclined configuration of the Signa system makes routine maintenance and lamp replacement quick and easy while the UV system is in operation.

In addition, the facility will feature roof-mounted water source heat pumps that provide heating and air conditioning in the UV disinfection building and neighboring switchgear building. The heat in the treated water will be recovered to heat and cool the building, another resource-recovery initiative at MWRD. This system consumes roughly 25 percent of the energy of traditional HVAC systems. An energy-recovery ventilator is also being installed in a sampling room, control room, and washroom, and a rain garden is being created between the two buildings.

Differences in existing infrastructure and hydraulics at the two plants required that a combination of methods be implemented. The task force also evaluated technologies that are best suited for both WRPs based on a triple-bottom-line approach that considered economic, environmental, and social criteria, while also providing quality customer service at the lowest cost. As a result, MWRD was able to do what was needed for less than half the cost of the original estimate. The MWRD restructured its capital improvement program (CIP) and adjusted operational efficiency goals to reserve $240 million in the budget for construction based on early estimates; however, the task force was able to hold the line on expenses so that the estimated costs for capital did not exceed $109 million. Ultimately, the MWRD has allocated resources to allow disinfection to occur without tax increases.

“The new Calumet disinfection facility will improve water quality for the growing number of people who kayak, water ski, and enjoy other recreational activities in the Chicago Area Waterway System,” said U.S. EPA Region 5 Administrator Susan Hedman. “U.S. EPA is proud to have played a role in making this project happen — a project that created a lot of good jobs and will improve water quality for years to come.” 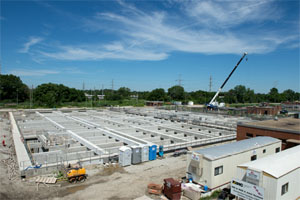 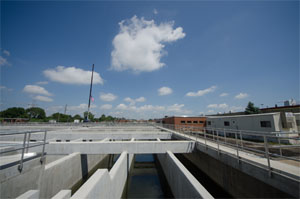 Chicago’s Grand Canyon
To maximize the water quality impact for the Calumet- Saganashkee (Cal-Sag) Channel, the MWRD ensured Calumet WRP disinfection came on-line in tandem with the Thornton Composite Reservoir; the 7.9 billion gallon reservoir is set to go online by late 2015, while disinfection will be in service for the 2016 recreational season.

The reservoir, tantamount to 12 football fields in size, is part of the MWRD’s tunnel and reservoir plan (TARP), also known as the “Deep Tunnel.” TARP consists of 109 miles of tunnels deep below the surface of the Chicago region and three reservoirs designed to capture and hold stormwater and sewage for treatment at water reclamation plants. Taken together, the tunnels (which hold 2.3 billion gallons), the Thornton Composite Reservoir in South Holland, IL, the Majewski Reservoir (which holds 350 million gallons) in the northwest suburbs, and the future McCook Reservoir (which will hold 10 billion gallons in the western suburbs), TARP will accommodate 20.55 billion gallons of water. 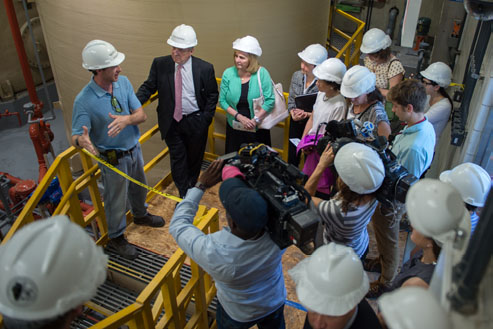 At first glance, the reservoirs appear to be nothing more than gargantuan holding tanks for stormwater and a tool in the battle against flooding. Yet, the reservoirs serve a greater purpose for clean waterways by collecting combined sewer overflows (CSOs). These CSOs normally enter the CAWS after major rain events, but with the Thornton Composite Reservoir, CSOs have a holding place before the Calumet WRP can treat the water. This latest engineering marvel from the MWRD becomes the world’s largest reservoir.

“It has drawn interest from across the world and, given the success of TARP, more cities are emulating our strategy,” said Spyropoulos regarding the reservoirs. “We thank our predecessors with the MWRD Board of Commissioners who had the foresight in 1972 to adopt a plan that made flooding and water quality genuine issues to prioritize. In past years, that polluted, untreated water would enter our waterways — or worse, our basements. Because of TARP, combined sewer overflows have been drastically reduced, and the addition of Thornton will again lead to more water quality improvements upstream.”

The Thornton Composite Reservoir will benefit 556,000 people in 14 communities throughout the south side of Chicago and south suburbs. It will protect 182,000 homes, businesses, and other facilities and improve water quality in the Calumet Rivers and Cal-Sag Channel by collecting CSOs before they enter waterways.

Between the advancements in disinfection and completion of the Thornton Composite Reservoir, the MWRD has made, in the words of Margaret Frisbie, executive director of Friends of the Chicago River, “the most significant water quality improvements in decades.”

Allison Fore has served as the Public and Intergovernmental Affairs Officer at the Metropolitan Water Reclamation District of Greater Chicago for four years. She has 20 years’ experience in government communications, having also worked for the Illinois State Treasurer, Illinois General Assembly, and Indiana Department of Environmental Management. She received her bachelor of science degree from Indiana University and master of arts degree from the University of Chicago.