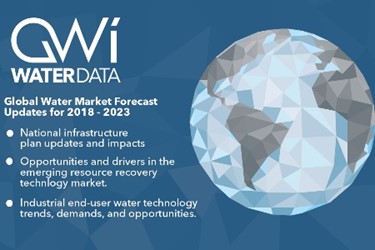 The global water market is projected to reach a total value of $914.9B in 2023, according to the latest 2018-2023 forecasts published by Global Water Intelligence (GWI). GWI’s market research linked this growth to a recovering global economy, high commodity and oil prices, and major water quality and infrastructure plans such as those in Saudi Arabia, China, and Southeast Asia aimed at improving wastewater treatment and incentivising private finance in water. The forecasts are available to GWI WaterData subscribers and were published as part of a major update to the WaterData platform.

New forecasts published by GWI have projected that the value of the global water market, representing the sum of both operating and capital expenditures by utilities and industrial water users on water and wastewater, is expected to grow from $770B in 2018 to $914.9B by 2023.

Christopher Gasson, Publisher at GWI commented that “The global water market is growing at a faster rate than at any time since 2010, driven by a buoyant global economy and a recovery in the oil price. That said, the rate of investment is still well below what is needed to maintain existing infrastructure and keep up with the demands of urbanisation, environmental protection and climate change.”

GWI’s team of research analysts found that the projected increase in global capital expenditure on water and wastewater is being fuelled by a return to growth for key industry sectors such as mining, upstream oil & gas, and microelectronics. Commodity and oil prices experienced a rebound in 2017 off the back of successfully implemented OPEC production cuts and a growing global demand for commodities such as copper, lithium, and nickel as a result of increased demand for batteries and electric vehicles.

GWI’s analysts have forecast increases in spending on water and wastewater treatment systems, particularly in the oil & gas and mining sectors, over the next five years.

The market for oil-water separation technologies for instance, is forecast to grow by 14.6% bringing new opportunities for technology suppliers and specialists in water management and treatment. Rising oil prices are facilitating a boom in the North American fracking industry, and the renewed exploitation of mature fields like the Permian Basin which increasingly have high water management and treatment requirements. GWI found that the average number of water barrels used per frack in the Permian Basin increased 434% between 2013 – 2016.

The North American fracking boom is also creating a new market for “midstream” water management infrastructure where water is piped, managed and treated at plants in closer proximity to the fields, in order to more easily meet the water needs of the fracking industry.

Similarly, GWI’s analysts forecast that global capital expenditure on water and wastewater by the mining industry will increase by 23.5% to $1.64B by 2019, mirroring a sustained increase in the price of commodities such as copper, nickel, cobalt, and chromium worldwide, fuelling the expansion of mining operations as well as new projects.

The new forecast updates suggest the growth of the mining industry, coupled with increasing competition for water resources between municipalities and industries in regions threatened with water scarcity, will create new opportunities for seawater desalination and water reuse projects, as the world’s mining hubs act to secure their water needs.

Chile for example, is set to become a key source of desalination project opportunities. A 128.5% increase in the use of seawater in the country’s mining operations is expected over the next ten years, driven by continued investments in new mining projects, and the impact of a new regulation which makes desalination mandatory for mining operations with water needs exceeding 12,960m3/d.

GWI’s market analysis also found the introduction of more stringent water and wastewater quality regulations will have a significant impact on the dynamics and growth prospects of several key water markets over the next five years, especially in China and India.

Increased regulatory powers of relevant agencies in both countries has resulted in stricter enforcement, and a clear uptick in project flow for wastewater treatment projects. In China, drives to tackle flooding and stormwater pollution under the ‘sponge city’ programme and to centralise and standardise industrial park wastewater treatment are coinciding, creating a diverse range of technology opportunities. India meanwhile is seeing a breakthrough in the adoption of reuse technologies, due to government directives demanding the use of treated sewage effluent in the power industry.

GWI also expects a major uptick in reuse projects to occur in China, as the central government tightens water pollution regulations for both utilities and industry. The 13th Five-Year Plan calls for 90% of municipal sludge to be treated to new, tougher environmental standards by 2020, creating new opportunities for projects and technologies focused on sludge management in one of the world’s largest water markets.

Additionally, the forecast updates suggest that the international water market is experiencing the strongest pro-privatisation wave in two decades, following on from the major national water privatisation programme announced in Saudi Arabia in 2018.

GWI’s analysts highlighted the expansion of private finance models for water in Southeast Asia as a key part of this pro-privatisation trend. The string of IPOs carried out by Vietnam’s utilities to raise the capital to expand wastewater treatment networks, the use of private finance for water beyond Metro Manila in the Philippines, and Indonesia’s progressing national PPP plans all look to provide opportunities for international investors and companies working in wastewater.

More updates and market data will be published on the platform as crucial market developments emerge.

Find out more about the GWI WaterData Global Water Market Forecasts for 2018 – 2023 here(https://globalwaterintel-info.com/p/36G3-40J/waterdata-global-water-market-updates)

About GWI WaterData
GWI WaterData is GWI’s market intelligence platform, offering the richest, most accurate and most timely information service for validating strategy in the international water market. WaterData allows you to analyse the current size and growth rate of your market, assess the competitive and technological landscape in your market and identify potential customers, partners and routes to market.

With regular updates, forecasts and webinars and extensive water industry databases on PSP projects, utilities, water tariffs and M&A deals, GWI WaterData is your single source of all data critical to business planning in the water industry. For more information, visit www.gwiwaterdata.com.

See an overview of the GWI WaterData Global Water Market Forecast Updates for 2018 – 2023 and a complete list of forecast categories here: https://globalwaterintel-info.com/p/36G3-40J/waterdata-global-water-market-updates

About Global Water Intelligence (GWI)
Global Water Intelligence (GWI) researches and publishes business data and information about the water markets worldwide. Based in Oxford, UK it also has offices in Singapore and USA (Austin, Texas) and has researchers and office staff in many other countries. It publishes three subscription titles and a free weekly GWI Briefing email (http://www.globalwaterintel.com/accounts/mailinglist/) around four individual reports per year on particular water sectors/geographic regions and the GWI WaterData and DesalData market intelligence platforms. It also organises two major financial conferences for the water industry each year: the American Water Summit in Autumn and the Global Water Summit in Spring. GWI was awarded the Queen’s Award for Enterprise in 2011. For more information, visit www.globalwaterintel.com.