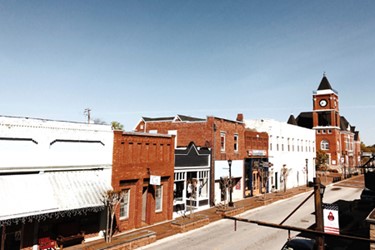 The City of Dallas captured an additional 600,000 gallons of billable water in four months.

Just 30 miles northwest of Atlanta, the City of Dallas, GA, offers a reprieve from the busyness of the big city with the retained charm of simpler times and a friendly community. Whether visitors and residents want to take in the city’s quaint, historic downtown or have a chat at the local bakery, there’s plenty of southern hospitality to go around.

While the city might have an easygoing appeal, running the local water utility is anything but a breeze. Made up of 12 District Metered Areas (DMAs), the City of Dallas water infrastructure includes 3,700 water connections across 38 miles of water line.

The utility team’s constant goal is superior service for the city’s 14,000 residents, and the utility has built high standards for its services based on the city’s tradition of community and growth.

After analyzing annual water loss audits for the city, the team discovered significant issues around non-revenue water. In 2014, real and apparent water loss accounted for 31.3 million gallons — nearly 20 percent of the city’s total water supplied for the year — which meant lost revenue.

The city discovered that a large percentage of its water was simply being lost, so it was a problem that couldn’t be ignored. When you’re a paid utility that purchases its water from the county, every drop counts.

The audit results spurred the utility team to create a robust water loss and control program. As part of the program, they decided to replace the existing water meters with a system that could more efficiently identify issues to help minimize non-revenue water.

They replaced approximately 320 meters in one subdivision with Sensus iPERL® residential water meters. Offering low-flow accuracy and high-flow durability, the meters use magnetic technology to capture previously unmeasured low flow. City of Dallas employees believed that the meters would provide consumption data far beyond what they were currently experiencing, and that instinct was correct.

The iPERL water meter picked up flow data they never had before, even registering the smallest bit of water usage for activities like the flushing of toilets or the washing of hands.

Proof In The Numbers

The results of the initial deployment were immediate and quickly translated into real savings. In just four months, the city billed for an additional 600,000 gallons of water in the subdivision and had gained back more than $12,000 from its initial investment.

And the benefits went beyond water conservation. The new meters also proactively improved customer interactions. The city can now call the customer and tell them about a leak before the bill is ever mailed to their house.

More accurate reads improved the billing process, but also came with questions from customers as bills increased to account for water that was previously unmeasured.

Throughout the deployment, the City of Dallas remained transparent to let customers know what to expect. Although bills were slightly higher, the new meters would serve to prevent major overages and identify when there is actually a leak going on to quickly address the problem.

Based on the success of the rollout in just one subdivision, the utility is now deploying a full advanced metering infrastructure (AMI) solution across its entire service area.

So far, the city has upgraded about half of its existing meters and is also implementing a dedicated two-way communication network that will allow staff to remotely monitor water usage and increase billing accuracy. No longer will the utility need to deploy technicians to manually read meters or identify leaks when a customer reports it.

The city is now at a point where the solution has already paid for itself. Once AMI is added, the city’s utility will be able to further increase efficiency and proactively serve its customers with insights from real-time data. There are also plans to explore adding a customer portal in the future. As customers begin to create their accounts, they can pull up usage data when they have questions about increased billing costs.

The AMI solution provides near real-time data to identify when water is going through a customer’s meter, but the end goal is to empower the customer with this data and establish a positive ratepayer-utility relationship.