From Rags to Riches: Chopper Pump Gets It Done 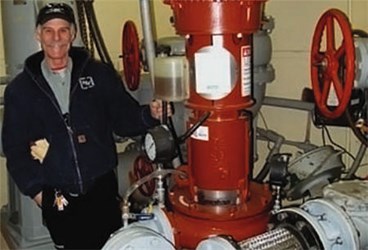 The North Tahoe Public Utility District (NTPUD) serves residents and vacationers in the Lake Tahoe area. Vaughan Co. provided a 50 HP, 1750-RPM model PE4P6CS-118 vertical pedestal chopper pump for the Carnelian Bay Pump Station to replace an existing pedestal pump, which was having difficulty with ragging. The Vaughan pump was intended to be driven by a Variable Frequency Drive (VFD) to provide 1150 GPM at 84' TDH at less than 1750 RPM, but because of costs the VFD was eliminated from the project.

During startup Vaughan's representative, Rockwell Engineering & Equipment, found that the pump was vibrating because it was operating in high-flow cavitation. With no installed VFD, the pump couldn't be slowed down to reduce head and flow. With all organizations working together (Vaughan, Rockwell, Resource Development, Kennedy / Jenks Consultants, and NTPUD), static pressure gauge readings showed that the discharge elevation established in the 1950's was off by 14 ft. This resulted in less static head than expected, causing the pump to operate in a cavitation region of the head/flow curve. Here was a critical pump operating in a severely vibrating condition because operating conditions were different from those specified, just 5 days before Christmas. And overflowing the lift station into Lake Tahoe was certainly not an option.