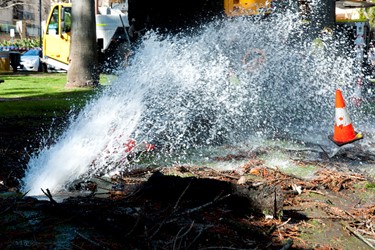 When water service was interrupted in Fort Lauderdale, more than 200,000 people were affected during some of the year’s hottest days in one of the world’s most balmy climates. And, surprising as it may sound, the cause of the catastrophe was traced back to a simple, and seemingly avoidable, miscommunication.

“Water service was restored to the city of Fort Lauderdale and surrounding areas … following a temporary repair to a major water main that was damaged by a construction crew,” according to USA Today. “The broken 42-inch pipe had forced the city to cut off access to running water … during a hot summer day.”

Naturally, people wanted to know how such a major water service issue could have started. It turns out that the city and a local construction crew were not on the same page about where buried infrastructure was located.

“Fort Lauderdale never warned a contractor that a critical water line lay buried where workers planned to dig … a report shows, but city officials say that’s because the contractor supplied the wrong address,” the Sun Sentinel reported. “The contractor, Florida Communication Concepts, used a service called Sunshine 811 to find out whether there were underground utilities it had to watch out for while doing work for Florida Power & Light Co. The statewide utility service is authorized under Florida law and is the state’s official resource for companies and individuals planning underground work.”

Reportedly, the contractor entered an address 75 feet south of the area where it actually dug and, as a result, fractured a pipe that supplies raw water to the city’s primary treatment plant.

Following the interruption, the city’s mayor explained that a temporary fix was put into place, leveraging a concrete bunker surrounding the broken pipe. But before that solution could be put into place, repair crews reportedly installed a much more rudimentary fix.

“The damaged water pipe was hours away from completely cutting off the city’s water supply when crews implemented a truly back-to-nature solution — stuffing a log into a hole in the pipe to stop the water from gushing out,” according to a subsequent report from the Sun Sentinel. “The tree limb plugged the hole a contractor had drilled into the pipe. Once it was in place and strapped down, it and the pipe were encased in concrete.”

Since then, a boil water notice has been all but completely lifted for the city and surrounding areas. Still, the event serves as a reminder of just how fragile, and critical, water infrastructure can be.