Florida Beach Closures Tied To Seaweed, Not Nearby Wastewater Plant 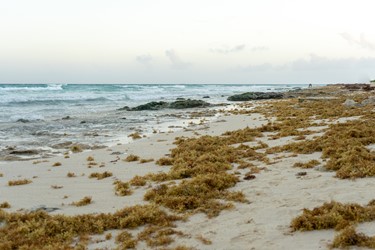 With beaches in Key Biscayne, FL, closing due to high levels of bacteria in the water, many may have blamed a nearby wastewater plant for failing to properly treat its effluent. But a recent study indicates that an environmental issue is more likely to blame.

“There’s a sewage treatment plant that pumps treated waste a few miles off the coast from Key Biscayne, but now research hints a rash of beach closures may be tied to a more natural problem: seaweed,” according to the Miami Herald. “While preliminary, the November report notes tests for human and animal waste in the water mostly produced unremarkable results but high amounts of sargassum on the beach seemed to be an active source of the same bacteria flagged in the fecal tests.”

Despite the preliminary results, researchers are still evaluating human and animal waste from stormwater runoff and the nearby Central District Wastewater Treatment Plant, as well as seaweed, as potential culprits for the high bacteria levels and resulting beach closures. Still, as of this writing it appears the wastewater plant is not a significant part of the problem.

“Though preliminary, the [University of Miami] study found no link between Key Biscayne’s beach problem and a nearby county sewage facility,” per the Herald. “The plant on Virginia Key, the island between Key Biscayne and the mainland, treats raw sewage and then discharges treated sewage through an underground pipe nearly four miles into the Atlantic Ocean.”

The Herald also noted that sewage spills throughout Miami-Dade County were down significantly in 2018 from previous years, while beach closures and sargassum levels were both trending up.

“The spike in beach closures overlaps with inundation of sargassum on Southeast Florida beaches over the last several years,” the Herald reported. “The spike in seaweed arrivals was tied to an explosion of sargassum growth in the Atlantic Ocean, a trend some scientists link to increased nutrient use along the Amazon River.”

Key Biscayne has been burying its sargassum under the sand to keep up its beaches’ appearance. But with the links between the seaweed and bacteria, it reportedly plans to end that practice.

Despite the evidence appearing to point to seaweed as the cause of the bacteria rise, as opposed to mismanagement at the local wastewater treatment plant, local authorities are not yet satisfied with any one conclusion.

“For now, village leaders aren’t ready to express any confidence that they know seaweed, septic tanks or the sewage plant is the cause of Key Biscayne’s beach woes,” per the Herald.