Floating Islands For Stormwater And Other Applications 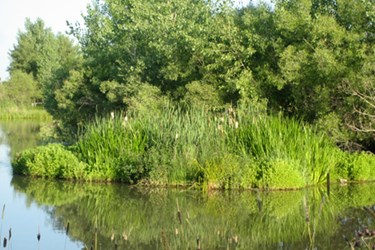 Floating islands, also known as floating treatment wetlands (FTWs), are a relatively new technology for improving water quality and creating habitat.  Over 5,000 floating islands have been installed around the world in the past decade.  Island sizes range from small decorative units to larger than football fields, and can be made in any shape or buoyancy.  Islands have withstood numerous freeze/thaw cycles, as well as typhoons, tornadoes, hurricanes and major snowfalls.

FTW demonstration projects have been completed by Floating Island International (FII) in collaboration with the USACE, USGS, NRCS, U.S. Forest Service, Government of Singapore, New Zealand’s National Institute of Water and Atmospheric Research, and others.  FII’s team and collaborators includes biofilm and wetland researchers in North America and internationally.

Numerous case studies have been developed for stormwater, municipal wastewater, lakes and agricultural runoff, “living shorelines” and erosion control.   Applications for landfill leachate and metals removal have also been explored. These studies show that a BioHaven® (the original FTW developed in 2004 by FII) will remove contaminants such as nitrogen, phosphorus, BOD, TSS, and total and dissolved metals.

FTWs can serve as an economically viable retrofit to stormwater ponds because they:

Nutrients in water are problematic in North America and around the world.  Under current best management practices, nitrogen and phosphorus tend to cycle into algae, cyanobacteria, aquatic plants or benthic organic matter poised to return to the waterway given appropriate conditions.  Most waterways in the U.S. also experience at least occasional hypoxic (low oxygen) conditions.  An estimated 25% of lakes in the U.S. experience even worse dissolved oxygen conditions and become anoxic seasonally.  This factor greatly limits these waterways, preventing them from sustaining the biota that could otherwise continue cycling nutrients out of water.

Nature's wetland effect provides an alternative.  Given sufficient biofilm reactive surface area in combination with circulation, biofilm-generating bacteria can cycle nutrients into periphyton at levels sufficient to keep up with both inflow and inventoried nutrients.  Periphyton is the viable microfloral community attached to the surfaces of submerged objects in water; it comprises biofilm, algae, fungi, zooplankton and larger invertebrates.

Harvesting fish and other aquatic life fed by FTWs can be part of this strategy.  By harvesting fish at levels that exceed influent nutrient quantities, waterways can be transitioned from a eutrophic or hypereutrophic level to mesotrophic, with corresponding improvement in all standard water quality parameters.  When combined with strategic fishery management, biofilm/periphyton can provide a food base for up to 55 pounds of fish per acre-foot of water, based on a year-long study at Fish Fry Lake near Shepherd, MT.  This mass of fish translates to removal of about 0.5 pounds of phosphorus per acre-foot.  If left unattended, that same amount of phosphorus could cycle into about 3,600 pounds per year of aquatic plants or 550 pounds of filamentous algae.

In addition to removing phosphorus via the food web, FTWs can remove it via three other pathways:

Using public information, FII has developed a cost chart comparing BioHavens to other technologies for phosphorus removal (see chart below).  BioHavens, either with or without aeration, have substantially lower costs than alternative technologies such as alum treatment. 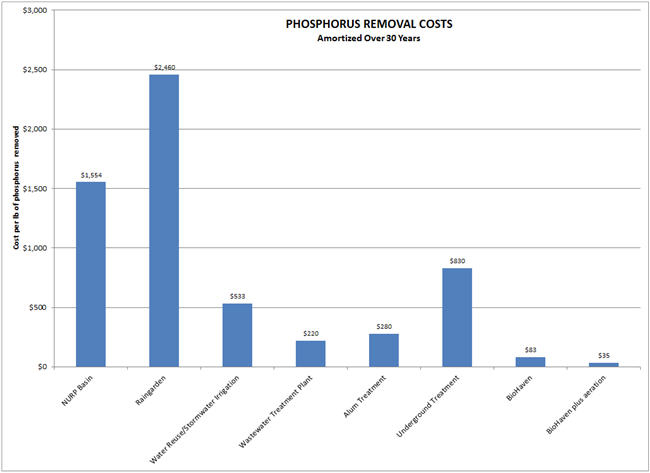 FTWs are scalable by building larger units or multiple units.  Islands for water treatment of very large water bodies and high nutrient loads, encompassing many acres, have been proposed and are being considered compared to more invasive, costly technologies such as dredging.

By biomimicking nature, FTWs provide the “concentrated wetland effect” that transitions nutrients through the food web.  FTWs and natural floating islands are essentially simple biofilm reactors that can include plants.