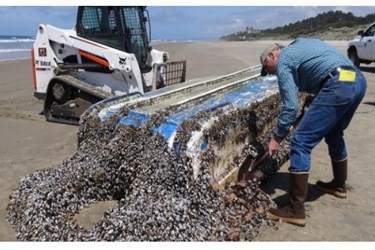 Five years after a massive earthquake struck Japan and triggered a tsunami that is still washing debris onto the West Coast of the United States, scientists are unsure whether any of the 200-plus non-native species that hitchhiked over on that debris have gained a foothold in Northwest waters.

Four separate findings of barred knifejaws (Oplegnathus fasciatus) – a fish native to Japan – have been reported over the past three years, and Mediterranean blue mussels have been ubiquitous on tsunami debris. Yet no populations of non-native species that arrived with the tsunami debris are known to have established reproductive populations.

“Maybe we dodged the bullet, although it is still too early to tell,” said John Chapman, an Oregon State University invasive species expert who has investigated tsunami debris along the Pacific coastline. “It is possible that we have not yet discovered these reproductive populations, or that some species from Japan may be cross-breeding with our own species.”

Scientists have not had adequate resources to look extensively up and down the Pacific coast for evidence of establishment by non-native species – especially along long stretches of rugged shoreline.

The magnitude-9 earthquake that struck Japan on March 11, 2011, was the largest in that country’s history and generated a tsunami that had waves estimated as high as 133 feet. The power of these two events, combined with the growth of human settlement over the past two to three centuries, created a new paradigm, said Samuel Chan, an expert in aquatic ecosystem health and invasive species with the Oregon Sea Grant program at Oregon State.

“A tsunami 300 years ago, or even just 60 years ago, would not have created as much marine debris that became a vehicle for moving species across the Pacific Ocean that could become invasive,” Chan said. “What makes these major tsunami-driven events different in modern times is the substantial human industrial infrastructure that we have built along the Pacific coast.”

The first indication that a potential problem loomed came in June of 2012, when a large concrete dock that originated in Misawa, Japan, washed ashore near Newport, Oregon – just a stone’s throw from OSU’s Hatfield Marine Science Center.

The 165-ton dock – which was 66 feet long, 19 feet wide and seven feet high – was covered with nearly 200 species of plant and animal life, including a species of brown algae (Undaria pinnatifida) that nearly covered the structure. Chapman and colleague Jessica Miller also found Northern Pacific sea stars, Japanese shore crabs, at least eight species of mollusk, an anemone, a sponge, an oyster, a solitary tunicate, three or more species of amphipods, four or more species of barnacles and worms, bryozoans, a European blue mussel known as Mytilus galloprovincialis, and a sea urchin.

“Frankly,” Chapman said, “we were blown away. We had always thought these organisms would not be able to survive the long trip across the Pacific Ocean, the middle of which is a biological desert. Yet here they were.”

In March of 2013, a boat from Japan containing five barred knifejaws washed ashore in the state of Washington; one is still on display in the Seaside Aquarium. A second knifejaw was filmed in a shipwreck near Monterey, California. Then a third knifejaw was found trapped in a crab pot near Port Orford, Oregon, in February 2015. Just two months later, another was discovered in a boat tank from Japanese tsunami debris near Seal Rock, Oregon.

“Those knifejaws all survived,” Chapman said. “Theoretically, the water temperatures north of Point Conception, California, are too cold for them to spawn. But it’s hard to know for sure.”

Chan has been working with colleagues from Japan’s Tottori University for Environmental Studies on a project that launched dozens of transponders into the waters off that country and traced their path across the Pacific Ocean to North America. The researchers’ goal is to find out what routes the tsunami debris might have taken and how that may influence the type of organisms found aboard the debris.

“Some species have been discovered that are not native to Japan, and others have not even been identified,” Chan noted. “The transponders bobbed around off Japan for some time and then went fairly quickly across the Pacific. But once they arrived here, they moved in and out of near-shore waters, and up and down the coast.

“Satellite tracking of transponders and their discovery by beachcombers indicates that they floated for 2-3 years before they beached on land,” Chan added. “The movement patterns of the transponders within the continental shelves of Japan and North American – where nutrients and food are relatively available – could be one piece of a complex puzzle that have allowed these organisms to survive the trans-Pacific journey.”

Chan said international exchanges in the five years since the Tohoku earthquake and tsunami have been a bright point, resulting in close collaboration and a shared sense of discovery among Japanese and American scientists.

“The debris still arriving five years later is a reminder that has raised awareness among people – many of whom have been complacent or unaware – about the power and destruction that earthquakes and tsunamis can cause on both sides of the Pacific,” Chan said.

About OSU's Hatfield Marine Science Center
The center is a research and teaching facility located in Newport, Ore., on the Yaquina Bay estuary, about one mile from the open waters of the Pacific Ocean. It plays an integral role in programs of marine and estuarine research and instruction, as a laboratory serving resident scientists, as a base for far-ranging oceanographic studies and as a classroom for students.