By Sarah Horn, Manager of Marketing and Communications, Borrego Solar

Water districts in an increasing number of states can benefit from significant energy savings by installing solar and/or energy storage at their facilities, including wastewater treatment plants, water irrigation distribution centers, and office buildings. A system can be installed on a facility’s rooftops, parking lots, unused land, or even on filled-in waste ponds like Borrego Solar did for Peterborough, New Hampshire’s Waste Water Treatment Plant. 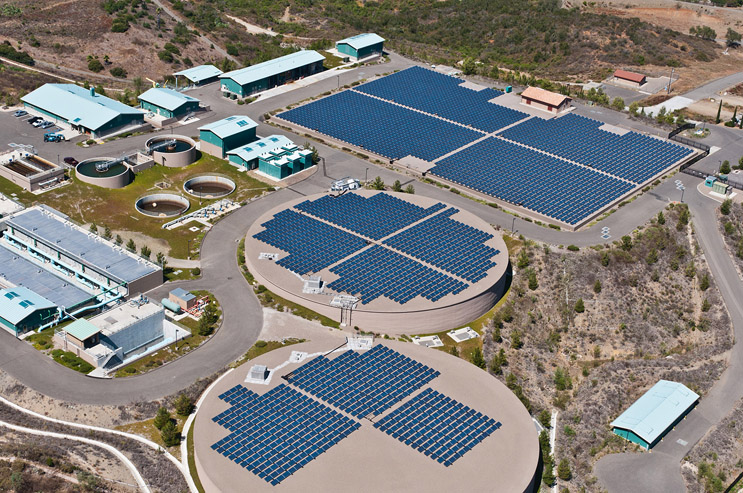 Energy storage refers to large batteries connected to software, designed to work with renewable energy technologies like solar to help users save money on their utility bills. There are a number of ways that water districts can save money with energy storage systems.

First, energy storage reduces costly demand charges by discharging energy behind the district’s meter as electricity use begins to spike. Second, it helps align customers’ energy use with time-of-use rates, allowing a district to shift its energy use to consume grid power when it is cheapest and run on battery power when grid electricity is costliest.

Savings from renewable energy can be achieved by paying for a system outright, which results in the best economics, or by taking advantage of a variety of financing options, such as Tax Exempt Municipal Leases. These savings can be passed along to rate payers or used to improve aging infrastructure. We continually hear from public sector customers, especially regarding public services, about the challenge of having to continue to raise rates or taxes to expand services for a growing population or improve aging infrastructure. By adopting solar or/and energy storage, savings can be freed up to reduce economic burdens on ratepayers.

Whether rural or urban, water districts and government agencies can save taxpayer money, meet their sustainability goals, and mitigate the risk of rising and volatile utility energy rates. Here, in broad strokes, are some of the types of programs that many states have in place that can help water districts unlock energy savings.

Net energy metering (NEM) is a billing arrangement that allows solar customers to receive utility bill credit for any solar energy they feed onto the grid in excess of what they consume on-site. NEM essentially allows the utility meter to “spin backwards.” Solar customers pay only for the net amount of electricity pulled from the grid beyond the amount of electricity generated by their solar system. Net metering is particularly helpful in locations with significant seasonal weather changes because it allows solar customers to bank their net metering credits from summer months to keep their winter electricity costs down.

California is in its second iteration of its NEM program, known as NEM 2.0 – which is currently uncapped. Under NEM 2.0, solar customers receive a credit valued at the retail rate. However, the California Public Utilities Commission plans to revisit and revise the NEM 2.0 credit value in the next few years, so now is the time for California water districts to consider a solar investment.

Some states have put a cap on the number of megawatts of solar eligible for NEM programs. For instance, in Massachusetts, the cap varies depending on factors such as the utility company and whether the system is publicly or privately owned. Thus, in states with caps in place, energy users interested in exploring solar should engage with a solar firm sooner than later to ensure they get their project going before the cap is approached. 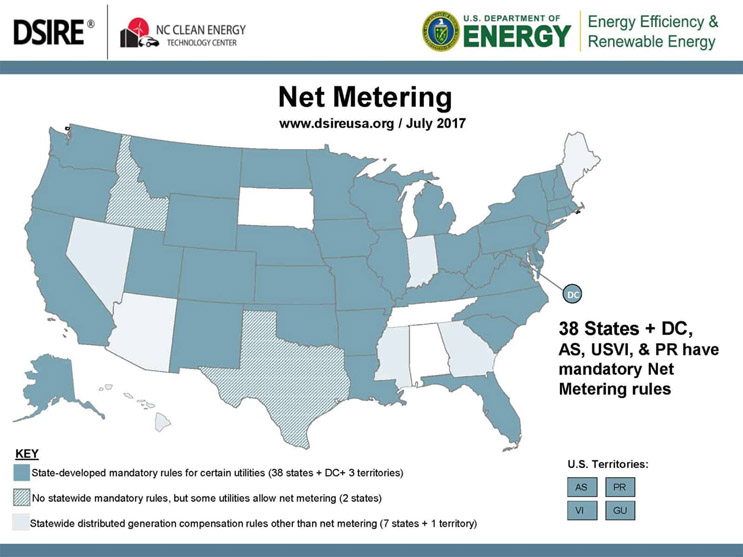 Many states have or are in the midst of establishing community solar programs which enable businesses, public entities and homeowners to subscribe to a qualifying solar project and receive credits from their portion of the generation. There are several states with solid shared renewable programs currently in place.

Massachusetts’ SMART program has the best designed program in terms of flexibility for large customers; offers a high enough credit value to provide customer savings; and is a large enough program to attract a really diverse marketplace of community solar offerings. In Massachusetts, large customers can either sign up for a flavor of shared renewables program that also includes smaller customers or elect to do a shared solar facility that just meets their load.

New York’s program also has a solid foundation. It is an uncapped program in theory. However, the recent transition to the Value of Solar (VDER) tariff means that the future of the community solar market is in serious question. In working with other stakeholders and the Public Service Commission (PSC) to improve the Value of Solar tariff, we remain optimistic that we will see these issues fixed soon.

Illinois is currently developing a strong community solar program, but we still have some questions about specific policies—for example, whether capacity in the program will be divided up by random lottery. We think this would be a mistake and would penalize responsible developers and add unnecessary cost to the program. That said, the IL Power Agency, which runs the program, has generally been learning from and referencing some of the earlier mistakes other states have made and as a result is working to set up a robust design.

Minnesota’s program is also attractive in certain ways, such as that it is uncapped in Xcel territory, but we have concerns over the value of the credit and overly restrictive geographic restrictions.

RES-BCT is a California program for public sector customers that expands their options for where to site a solar installation beyond their own facility. Specifically, RES-BCT allows the energy generated from a solar project located on one property to be credited to one or multiple utility accounts located elsewhere. RES-BCT credits solar exports at the generation rate, which is slightly less than the full retail rate offered by NEM.

California’s public sector has been at the forefront of solar adoption due in a large part because of the many programs regulators have established to open up possibilities for adoption. RES-BCT is an example of thoughtful solar program that can serve as a model for other states.

Meter Aggregation (NEM-A) allows public sector energy users to install solar on one property and use the full retail rate NEM credits it generates to offset electricity usage on contiguous properties. This is a great tool for water districts or municipalities with multiple facilities that are adjacent to one another. NEM-A offers economies of scale, allowing an energy user to build a larger system whose solar generation can offset the electricity use of multiple meters. 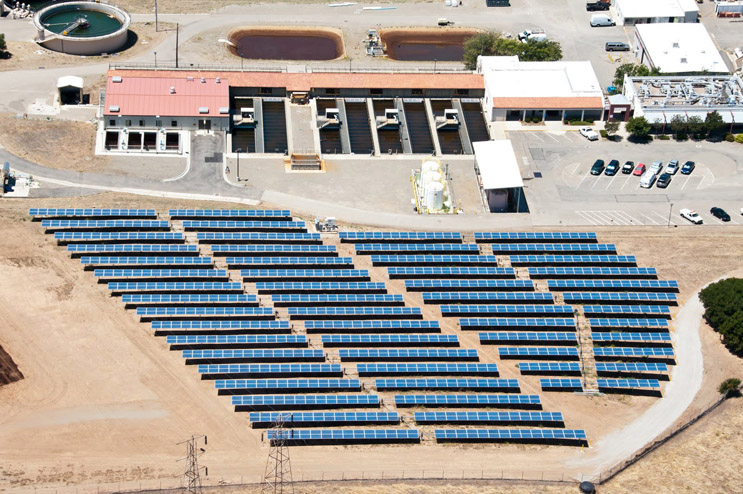 In solar-friendly states such as California, Massachusetts, New York and Illinois, regulators and lawmakers have created incentives for solar and energy storage systems.

In California, the Self-Generation Incentive Program (SGIP) provides incentives for energy storage. It is designed to save energy users money, provide grid services, help California meet its ambitious environmental goals, and transform the market for this valuable technology.

On June 1, 2017, a new law went into effect in Illinois that incentivizes solar development in the state. The primary program that will drive the installation of new solar is the Illinois Adjustable Block Program (ABP). The ABP will open in late fall and is structured so that a new solar system receives a front loaded 15-year contract to sell Solar Renewable Energy Credits (SRECs) to the electric utility. Every 1,000 kilowatt hours of generation will create one SREC. The system owner sells the utility all the SRECs created from the operation of the system over a 15-year period. The price for the SRECs is at a predetermined price for all systems in a given block, so there is no risk to SREC price fluctuation once a project is accepted into the program. The total 15-year SREC contract value is paid equally over the first five years.

The blocks are sized to allow for a large group of projects to qualify, with the intent of creating a continuous and sustainable market. Nonetheless, there is an advantage to being in the first block, as the price for SRECs will decline 4% as blocks are filled. Illinois is also offering a smart inverter incentive. Once a solar project reaches operation, the system owner is eligible for a one-time $250 per kilowatt lump sum rebate from the utility. Illinois’ program is expected to begin accepting applications in the fall.

To encourage solar and storage adoption certain utilities offer specific rates for customers who have solar and/or storage. In California, Option R is an example of one of these such rate structures. It features lower demand charges and higher charges for energy usage. Though a higher energy cost (dollar per kilowatt-hour) sounds like a bad thing, it actually works in a solar customer’s favor because the credits earned by exporting solar energy to the grid can be used to offset energy charges, but not demand charges. Option R minimizes costly demand charges and provides more opportunity to offset electricity usage via solar credits.

When you engage with a solar developer, find out whether these rates exist in your state.

Sarah Horn is Borrego Solar’s Manager of Marketing and Communications. As a specialist in solar and energy storage, she aims to educate and inform the commercial and public sector markets on clean energy technologies. She can be reached at shorn@borregosolar.com