Feeling The Warmth Of Wastewater 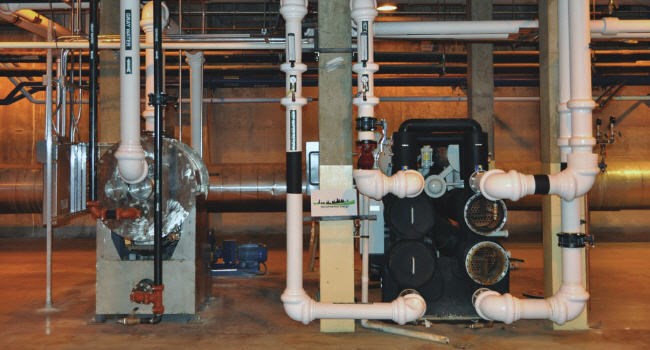 Philadelphia’s Southeast Water Pollution Control Plant is blazing a trail for energy efficiency and sustainability by extracting heat from wastewater, via the NovaThermal Energy system.

There is a well-known hesitancy to adopt new technology in the water and wastewater industry, and the worry is understandable, perhaps even responsible. When it comes to water quality, with its health and environmental ramifications, it’s important to exercise caution. However, certain money-saving and sustainable technologies unfairly fall victim to the risk-averse mindset, particularly those that operate outside the realm of treatment. The Philadelphia Water Department (PWD) is taking advantage of one such technology; they are the nation’s first municipal facility to draw thermal heat from wastewater.

Philadelphia’s three WWTPs treat over 500 million MGD and have a combined design capacity to handle 1.2 billion GPD during wet weather. The Southeast Water Pollution Control Plant, which is currently piloting the thermal recovery system, is actually the smallest of the three at 112 MGD on dry days (with peak capacity of approximately 224 MGD). That’s still a lot of wastewater, so the city decided to make good use of it — or at least a portion of it.

The Power Of Wastewater

Since April 2012, the Southeast facility has been getting roughly 50 percent of its heat directly from sewage.  The city estimates that savings will be $15,000 or more per year in energy costs. The unit generates nearly 1 million BTUs per hour, utilizing just 200 GPM of wastewater. NovaThermal Energy, a Philadelphia-based company with roots in China (where the technology was developed), is the U.S. patent-holder for the system, which consists of an anti-block filter (to keep out solids), a heat pump, and piping. For every unit of electrical power the system consumes, it generates four units of heat.

“The energy's already there in the water,” said Plant Manager Doug Cowley. “For our purposes, it's essentially infinite and it's free.”

The system itself was not free, of course, but it did come at little cost to PWD or its ratepayers. The project was financed through a Greenworks Pilot Energy Technology Program Grant for $150,000, with the remaining $90,000 covered by NovaThermal. PWD spent a little over $30,000 on installation of the system and took over maintenance of the system beginning with the 2013 heating season.

“We're not under the gun, so to speak, to show a return on some huge investment,” said Cowley, referencing the no-risk nature of the agreement.

While the Greenworks initiative is unique to Philadelphia — a conscious effort to become the greenest city in America — it’s not unusual to get grant money for energy-efficient projects. Furthermore, vendors will often install equipment for free to prove its value. For PWD it was a logical decision, and right in line with the department’s core values.

“If we can keep costs down, we can keep rates down,” explained Paul Kohl, PWD’s energy program manager. “We have an inherent awareness that many of our ratepayers don't have an extra $20 to spend on water. The city of Philadelphia is the largest poor city in the country. That's a strange title to have, but that’s what we are. Twenty-six percent are below the poverty level, but then half of those are actually below half of the poverty level, which is considered deep poverty. That's a core of our ratepayers.”

“All of this really resonates with us,” Kohl continued. “We’ve really bought into the idea of being public servants, saving the environment, and benefiting the city … because it's the right thing to do.” 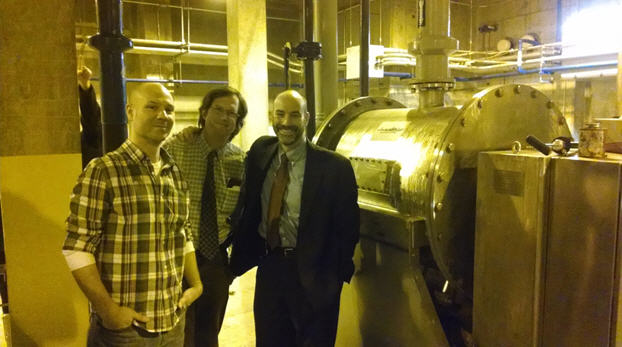 Though PWD is fortunate to have Kohl as a staff member dedicated to energy-efficient technologies, Kohl himself is quick to point out that “anyone can do this” — if they are motivated.

“All you need is a champion, someone to pound their fist on the table,” said Kohl. “If you get a person that’s really interested, it gets done; they convince their management structure, they convince city council, and they convince voters. When you have a leader who wants to go somewhere, generally speaking, people want to follow.”

NovaThermal is leading by example as well, as the pioneers of “sewage geothermal” technology (a bit of a misnomer, perhaps, in that the heat is derived from wastewater, not the earth). Although PWD only uses the thermal extraction process for heating (due to the building’s configuration), it can also provide energy for cooling. In fact, according to Jimmy Wang, chief engineer for NovaThermal, the savings are much higher for air-conditioning, thus dramatically increasing the value proposition and return on investment when used for year-round heating and cooling.

Another determinant for cost savings is the price of natural gas (in PWD’s case) or other competing energy source. Prior to installing the thermal recovery unit, Kohl recalled that PWD projected a “huge number” for natural gas, but the shale-gas boom pushed prices down. Still, PWD credits the NovaThermal installation for decreasing the city’s exposure to volatile energy prices. The pilot program was also praised for moving the plant closer to net-neutral energy use, diversifying Philadelphia’s bank of available energy sources, and reducing reliance on commercial energy providers.

Sometimes referred to as the “City of Firsts,” Philadelphia has staked yet another opportunity to lead others by example. “Sewage geothermal” may not catch on to the extent of, say, grammar schools or public libraries, but utilities might be wise to do their homework and research this innovative technology.