Most water managers use these methods because they are the best solutions available — tried-and-tested, results-driven technologies. However, these approaches to monitoring non-revenue water are also notoriously time-consuming and expensive, as they require prohibitively high investments in infrastructure and equipment relative to the number of leaks that are identified.

A quick assessment of non-revenue water management in a majority of cities around the world indicates that most simply react to anomalies in their water management systems, such as measuring drops in pressure within a district metered area (DMA), analyzing a smart water management system, or responding to a distressed call from a citizen reporting that a burst pipe has turned into a fountain of water on the street. Vast quantities of non-revenue water are wasted each year; this has prompted some technology providers to suggest that water leakage in urban environments is now akin to an epidemic.

Answers From Above
Now, a new tool for detecting non-revenue water leaks is available — a solution that utilizes spectral images from satellites, adapted from techniques used to search for water on other planets. Developed by Utilis, a water management company based in Israel, this noninvasive technique can identify more water leaks in the same amount of time as current non-revenue water solutions available to water managers.

Remote sensors collect data by detecting the energy that is reflected from Earth. Remote sensors can be either passive or active. Passive sensors respond to external stimuli. They record natural energy that is reflected or emitted from the Earth’s surface. The most common source of radiation detected by passive sensors is reflected sunlight. In contrast, active sensors, which are the primary devices used by Utilis, are also known as radars. These devices use internal stimuli to collect data about the Earth. For example, a laser-beam remote sensing system projects a laser onto the surface of Earth and measures the time that it takes for the laser to reflect to its sensor.

Of course, when dealing with data acquired from 400 miles above Earth, there is potential for problems to arise. Radar is susceptible to noises caused by vegetation, high buildings, metal objects, and the atmosphere. Those issues need to be tackled by a team of signal processing experts before the best possible results may be produced.

The process itself is quite intuitive:

Using these methods, it’s possible to scan an entire system every few weeks in a matter of seconds, rather than going to the same location every few years with the conventional solutions. This is the true power of remote sensing.

O&M Implications
The ability to scan an entire system every few weeks makes it possible to suddenly observe the micro-evolution of a leak. Subsequently, the organization can make more informed decisions about what leaks or areas to prioritize and even check to ensure that a fix was made to a satisfactory level.

The technology makes no alterations to the day-to-day operations of the municipality or the utility — the on-field crew will still use the same equipment for validation processes. However, instead of walking miles per day blindly hoping to find something, the crew gains the ability to narrow down the cumulative distance to just a few hundred feet overall per day, with a pool of five to 15 leaks to show for a day’s work. Thus, the organization can better utilize its personnel and become more cost-effective without any additional investment. 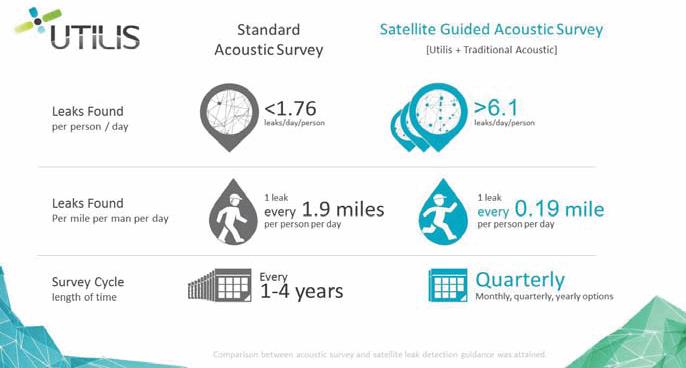 According to Utilis, a regular field crew of four people working with a standard acoustic process will uncover 1.76 leaks per day, on average. By comparison, satellite-based technology allows one person to find 6.1 leaks per day, and the same location will be surveyed again in a matter of weeks.

In contrast to usual acoustic technologies (hydrophones, loggers, correlators, high-sensitivity devices) that look for signs of water (mostly by sound), remote sensing enables utilities to look — for the first time — for the water itself.

Lauren Guy, co-founder of Utilis, has eight years of experience in scientific R&D, including microwave-sensing studies of other planets (predominantly Venus and Mars). He holds a B.S. in Geomorphology & Remote Sensing and an M.S. in Geophysics, and currently serves as the CTO and head of R&D at Utilis.