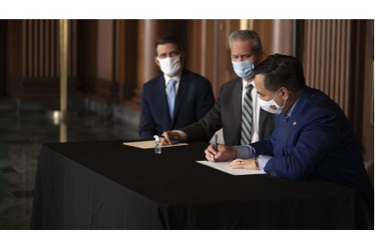 Today, the U.S. Environmental Protection Agency (EPA) and the State of Utah announced an agreement resolving the State’s legal claims associated with the Gold King Mine release, which occurred five years ago today, on August 5, 2015, in southwest Colorado. Pursuant to the agreement, Utah will dismiss its legal claims against the EPA and the United States, as well as EPA’s contractors, and EPA will strengthen Utah’s involvement in the Agency’s work to address contamination at the Bonita Peak Mining District Superfund Site, which includes the Gold King Mine and other abandoned mines. EPA will also continue to partner with Utah on other environmental priorities, including the assessment of abandoned mine sites in Utah that may be impacting its waters as well as other projects to improve Utah’s water quality.

“Today, we settled a case with Utah stemming from the Gold King Mine incident during the Obama administration. This agreement is a win-win for EPA and Utah. It will bring environmental benefits to Utah, avoid protracted litigation, and hopefully serve as a lesson for the future to avoid repeating the mistakes of the past,” said EPA Administrator Andrew Wheeler.

“After years of intense litigation and negotiations, we are very pleased that millions of dollars can now be spent towards mitigation, remediation and assuring water quality in Utah rather than years of more litigation, trial and appeals. This is what cooperative federalism looks like—a true federal and state partnership. Protecting the people, public health and environment of the State have always been the top priority in this case. Our two goals were simple. First, get the federal government to clean-up massive amounts of waste still lurking in many historic mining districts including the one that caused the Gold King Mine blowout. We have achieved that goal through litigation and now settlement. We are highly encouraged the EPA has stepped up and committed hundreds of millions of dollars toward cleaning-up several dangerous mining districts containing billions of gallons of potentially harmful substances that threaten Utah if they are released,” said Utah Attorney General Sean Reyes.

“This agreement is a positive step towards allowing both EPA and Utah to focus efforts and resources on improving environmental quality for our communities rather than litigation” said EPA General Counsel Matthew Z. Leopold. “Our partnership with Utah will be stronger as we continue to support the State in addressing its water quality needs.”

“EPA greatly appreciates Utah’s efforts to resolve these claims and identify opportunities to work together to improve water quality,” said EPA Regional Administrator Gregory Sopkin. “We are committed to continuing to work with the State to address the root causes of water quality impairments in Utah, including abandoned mines. The projects and activities in this agreement will result in improvements to Utah’s waters and the benefits they provide residents and visitors.”

As part of the agreement, EPA will act on the Utah Department of Environmental Quality’s application for $3M in Clean Water Act funds for various projects, including the development of water quality criteria for Utah Lake, septic density studies, nonpoint source pollution reduction projects, and nutrient management plans for agricultural sources. EPA will also initiate Superfund assessments of several abandoned mine sites in Utah by the end of calendar year 2021.

EPA has several other initiatives focused on improving water quality for Utah’s citizens. EPA is committed to continuing its work at the Bonita Peak Mining District Superfund Site, which includes the Gold King Mine. EPA is providing Utah with opportunities for substantial and meaningful involvement in EPA’s ongoing Superfund activities at the Site.

In 2017, EPA added the Bonita Peak Mining District Superfund Site to the Administrator’s Emphasis List of Superfund Sites Targeted for Immediate, Intense Action to develop an Adaptive Management Plan and site-wide Strategic Plan to facilitate cleanup progress and provide a decision-making framework for future actions. EPA has spent over $75M on the Site to date, and expects to spend in excess of $65M over the next several years. Recent interim remedial actions at the Site, including efforts to stabilize mine waste and reduce contaminant loading to surface waters at source areas, will inform the development of future cleanup remedies for the entire Site under an adaptive management framework. In addition, EPA released for public comment a proposed plan for a site-wide mine waste repository on July 29, 2020. The site-wide repository would store mining-related waste, including sludge from the Gladstone Interim Water Treatment Plant, which treats acid mine drainage from the Gold King Mine.

EPA will also continue its work on other abandoned mine sites that have the potential to impact downstream waters in Utah. Along with others, these sites include the Rico Argentine Mine Site, the Camp Bird Mine Site, and the Carribeau Mine Area. Coupled with its work at the Bonita Peak Mining District Superfund Site, EPA expects to conduct and oversee the completion of more than $220M in work on abandoned mining sites with the potential to improve Utah’s water quality.