As regulations on chlorinated disinfection byproducts and total residual chlorine become increasingly stringent, peracetic acid (PAA) is gaining in both interest and usage as a water reclamation disinfectant. Here’s what you need to know.

PAA is an organic acid with a strong oxidation potential (1.81 eV) commonly used as an oxidizing agent and disinfectant in industrial applications, such as poultry processing and beverage packing. It is a colorless, organic acid manufactured by the reaction of acetic acid, acetyl chloride, or acetic anhydride with hydrogen peroxide (H2O2) or by direct oxidation of acetaldehyde. It exists in an equilibrium mixture with water, hydrogen peroxide, and acetic acid (Figure 1). It is a stronger oxidant than chlorine and has a wide spectrum of antimicrobial activity (Kitis, 2004).

Currently, most PAA use in water reclamation facilities is driven by the need to consider disinfection alternatives to chlorination or ultraviolet (UV) radiation. Reasons for using PAA include:

If chemical disinfection is currently utilized, the capital cost of retrofitting the system for use with PAA is relatively low.

Benefits And Challenges With Utilizing PAA
PAA has several advantages over common disinfection technologies such as chlorination or UV. The efficacy of PAA is high over a wide pH range and is unaffected by high nitrite or low ammonia concentrations, which can fluctuate during secondary treatment. The addition of PAA does not increase the effluent chlorine concentration. Under conditions controlled to prevent contamination and elevated temperature, PAA can be stable in storage for up to a year without degradation, making it advantageous for CSO and other intermittent applications. In many cases, quenching can be eliminated because PAA is less toxic to aquatic species than chlorine and because lower doses are generally required. If chemical disinfection is currently utilized, the capital cost of retrofitting the system for use with PAA is relatively low.

Figure 2. Regulatory acceptance of PAA as a water reclamation disinfectant as of late 2017

There are disadvantages to using PAA under some conditions. All PAA formulations contain acetic acid, although the amount varies between manufacturers. The acetic acid in the PAA solution may increase effluent biochemical oxygen demand (BOD), so facilities with effluent BOD limitations need to take that into consideration. The cost of PAA is greater than sodium hypochlorite, although some of that cost is offset by reduced dosing and possible elimination of quenching. Finally, while the EPA has approved the use of PAA as a primary disinfectant at water reclamation facilities, each state regulatory agency must separately approve the use of PAA. Figure 2 illustrates the states that have already approved the use of PAA as a primary disinfectant or are in the process of approving it as of late 2017.

State Of The Industry
PAA has been utilized in the agriculture, food and beverage, and medical sterilization industries as a disinfectant since the early 2000s, 1990s, and 1980s, respectively. However, it wasn’t until the fall of 2011 that PAA first was used as a primary disinfectant at water reclamation facilities in the U.S.

A standard method to measure PAA residual concentration does not yet exist; however, PAA residual can be measured using the same analyzer/method as that for total residual chlorine. Still, the effort to develop a method is underway, and the technology for PAA measurement (DPD colorimetry) is already widely used. For online PAA residual measurement, amperometric probes are commercially available but have limited field demonstration data in wastewater applications. 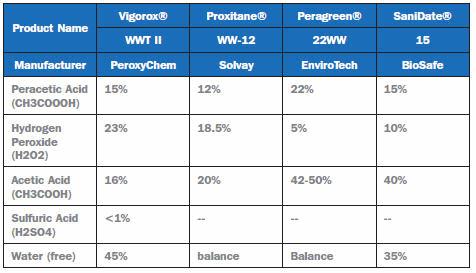 As the use of PAA as a disinfectant has expanded in the U.S. over the last several years, so have the number of water reclamationspecific PAA formulations. Table 1 lists various PAA formulations currently utilized in the water reclamation market. As of the end of 2017, there are over 20 installations across North America where PAA is being utilized as the full-scale disinfectant. Some of the North American full-scale installations are shown in Figure 3.

Implementation
For a utility considering the use of PAA, there is a step-wise approach that should be followed. The first step is to engage the state regulatory agency about the utility’s desire to evaluate PAA as a disinfectant alternative. In many cases, PAA may not be an officially approved water reclamation disinfectant; however, the state regulatory agency may be willing to allow its use on a case-by-case basis. In addition, coordinate the necessary data collected during the evaluation that the regulatory agency will ultimately want to see for future approvals.

The second step is to perform a bench test, similar to that done when evaluating chlorine. Grab samples of undisinfected effluent should be collected and analyzed in a laboratory to determine PAA demand-decay characteristics and to evaluate disinfection efficacy. This data is used in a high-level evaluation in which PAA is compared to other disinfection technologies. Engineering consultants and most PAA providers can assist in this initial testing. 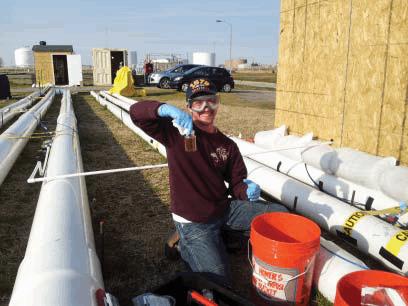 If PAA is the selected or short-listed disinfection technology, expanded testing is the next logical step. For large facilities, a sidestream pilot-reactor (Figure 4) is used (typically in the 25 gpm range), or for smaller facilities a full-scale trial could be considered, depending on the existing infrastructure. Data collected during extended testing would include: logging of continuous PAA dose, monitoring of influent and effluent water quality characteristics, measurement of PAA residual, and bacterial enumeration of influent and effluent water samples. This data, once gathered, is analyzed using a variety of modeling techniques to determine the PAA dose and contact time for design. Once testing is complete, utilities should meet with the regulatory agency again to confirm approval of the testing, results, and design methodology before proceeding into full design. 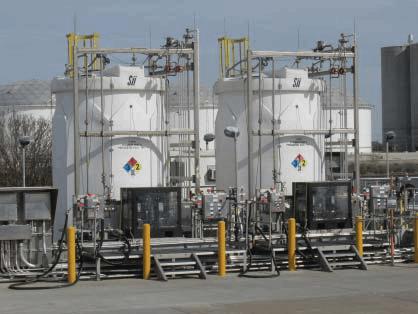 Several PAA providers offer their PAA storage, feed, residual monitoring, and control equipment with a lease option. This allows a utility to lease the equipment, including or excluding installation, along with a long-term (typically five-year) chemical purchase contract. This option is attractive in that it reduces the initial capital investment for implementation. Figure 5 is an example of a bulk PAA storage and feed area featuring PAA provider-leased equipment.

For a utility considering the use of PAA, there is a step-wise approach that should be followed.

Additional research and advancements/refinement in the use of PAA for wastewater disinfection are in progress in the industry. In 2016 the Water Environment & Reuse Foundation (WE&RF) began the Evaluating Peracetic Acid as Disinfection Alternative in Wastewater Treatment Process research project (LIFT14T16). Multiple publications and articles are coming out of this study between 2017 and 2018. Further, the Water Environment Federation (WEF) is developing a book dedicated to the use of PAA as a guide for the industry in implementing PAA. This publication is anticipated to be complete in 2018.

Summary
PAA is an effective water reclamation disinfectant gaining interest and market share in the U.S. alongside other more established technologies. Key aspects of evaluating or implementing PAA include both bench and pilot testing, as each facility is unique. Utilities should communicate early and often with their state regulatory agency when considering implementing an emerging technology.

Sarah A. Stewart, PE, is an environmental engineer and CDM Smith associate, based in the firm’s Houston office. Stewart has served as project manager for the implementation of PAA disinfection for wastewater treatment. She provides leadership for design and design-build projects in both the municipal and federal sectors.

Brian A. Hilts, PE, is an environmental engineer based in CDM Smith’s Latham, NY, office. Hilts has led many multidisciplinary design projects for water and wastewater treatment and has also provided construction management and project startup services. He is one of CDM Smith’s practice leaders for wastewater disinfection.