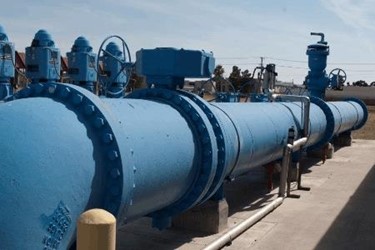 El Paso Water (EPWater) has long been recognized as a leader for its innovative water supply strategy. Water professionals from around the world visit the utility to learn about its acclaimed water reuse, inland desalination and conservation methods.

Located in the Chihuahuan Desert in Far West Texas, EPWater provides direct and wholesale services to 97% of El Paso County’s population, which numbers more than 800,000. The fourth largest city in Texas, El Paso is also the nation’s third fastest growing metropolitan area, with a 40 percent population increase projected by 2040.

While winter brings relatively cool temperatures, summers are hot in this scenic desert setting. Situated next to the Rio Grande River and intersecting with the Franklin Mountains, El Paso receives less than 10 inches of rainfall annually.
Hand-in-hand with its water supply strategy reputation, EPWater’s focus on customer satisfaction and reliability is paramount. Each day, the utility’s technicians and superintendents work behind the scenes to reliably produce and distribute water from the Hueco and Mesilla Bolsons and surface water from the Rio Grande. EPWater operates four wastewater and four water treatment plants serving the metropolitan area. Additionally, it operates more than 300 booster, lift and transfer stations that include fresh water, wastewater, reclaimed water and stormwater facilities.

AC UPS Causing Issues
Providing the setup, maintenance and technical support to the facilities spread out over the desert, while keeping up with the needs of the growing population may seem like daunting tasks. Nonetheless, Enrique Fuentes, EPWater’s Instrumentation and Control Superintendent, keeps the water flowing with his team of 12 field technicians and other staff. His recipe for success: work smarter by employing new technologies.

For example, in 2015, Fuentes and Instrumentation and Control Supervisor Juan Rodriguez took a hard look at EPWater’s UPS and backup battery performance at the remote sites. At the time, the utility depended on a 120 V AC UPS to automatically supply power during outages to keep the control system up and running until technicians arrived to restore power to the instrumentation, controller and microwave communications.

Red flags were raised during the AC UPS audit. The utility operated multiple brands of 120 V AC UPS systems at the stations. The existing systems were bulky and heavy, taking up significant station space. They provided no diagnostic information about the condition of the batteries that powered instrumentation, valves, pumps or other equipment. In the high heat and dusty conditions of the desert, batteries failed without warning, making the AC UPS virtually useless. If a station went down, water supply could be disrupted. Reserve tanks could empty or overflow.

“We had to go to the sites to determine if the AC UPS was failing,” Fuentes says. “We found at least a couple of AC UPS issues each week during the monsoon season. The system was not intelligent. It was very difficult to know if, and when, a failure occurred when we were not on site. The station could have been down for hours before we knew there was a problem.”

Rodriguez adds that when a station experienced a problem, the central operator had no way of knowing the source of the issue until a site visit had been conducted.

“It’s important for the central operator to know what’s going on at the site so he can send the right crew to it,” Rodriguez says. “We have capable personnel in the field, but they won’t know if it’s an electrical or other issue until they get there. We often ended up sending three guys from different departments to the station to fix the problem. By then hours have passed.”

“Depending on the problem, we may have sent other teams out as well. Those AC UPS related standby calls happened sometimes three to four times a week.”

Technology the Key to AC UPS Problem
Joe Cox has worked with Rodriguez and EPWater for 22 years providing control equipment, training and service. The sales engineer with nearby distributor B&M Machinery knew that the utility was looking for a solution to its AC UPS issues. He had an answer. “Power is your foundation,” Cox says. “If you don’t have reliable power, you have nothing. Some companies buy the cheapest UPS they can find, only to find out that it is the most expensive overall because of the cost of downtime and other issues.”

Cox and Siemens power supply and UPS expert, Nick Tamizifar, suggested EPWater switch from the 120 V AC UPS system to a new 24 V DC UPS system they had used in other applications. The DC UPS system’s remote diagnostics capability would let EPWater know in advance of a pending battery failure. It would also reliably provide backup power to the control system, allowing the PLC to remain energized long enough to provide detailed diagnostic information to central operations. In turn, the information from the 24 V DC UPS and PLC would precisely identify the cause of the problem, giving operations the intelligence to send the right crew to the site with a solution in hand, saving crucial time.

Although the suggestion was promising, Cox and prospective 24 V DC UPS supplier Siemens were asked to demonstrate the capabilities of the newly introduced SITOP UPS1600 system, with backup battery power supplied by the SITOP UPS1100 for a trial period before it would be permanently installed.

“We asked them to disconnect the battery and then switch it back. It went right back to utility mode. If I can break it in the shop, then it won’t be any good in the field. Also, I’ll give a new product a six-month trial. If it breaks, I find another supplier.  It’s not cost effective to keep buying the same brand over-and-over again and then send the guys to the field to install, calibrate and connect it multiple times if it keeps failing.”

Results Worth Mentioning
After the initial six-month field trial, the Siemens UPS1600 system worked flawlessly. The battery based backup system tolerates heat well without degradation, allowing for enough time to properly shutdown the operation and communicate alarm signals to central operations. Today, more than two years since the first installation, Fuentes and Rodriguez agree there have been no field calls to repair or replace the UPS; a far cry from the constant interruptions caused by the previous 120 V AC UPS system.

“The UPS1600 diagnostics tells us in advance if we have a low battery or we might have a problem,” Fuentes says. “We know Siemens batteries will eventually go bad. All batteries do. When that happens, we will be able to forecast battery replacements based on the history from the diagnostics. But the UPS1100 batteries haven’t failed in two years, so we are still waiting on a benchmark to schedule maintenance.”

And what about the number of station service calls that often required three technicians?

“It gives us enough information to forecast when a battery is going to go down. In the past, we just put a battery in. After six months, we hoped that it will hold up during a power failure. Now we can remotely determine the issue and use the field technicians more efficiently.”

Fuentes adds that the number of afterhours standby service calls have been reduced significantly. Additionally, approximately 20 percent of the facilities are equipped with backup electric generators. “But even with stations with electrical generators, we need the DC UPS to be reliable because there’s going to be periods when we’re going to be blank. The control center is not going to be able to read the PLC. We need the information from the PLC, like power spikes. It is critical during those times that we have reliable power to the PLC.”

Service and support into the Future
When EPWater chose the UPS1600 24 V DC UPS system to replace the 120 V AC UPS, Cox and Tamizifar of Siemens provided onsite training for the utility’s technicians and administration, including working with SITOP UPS Manager software to configure and monitor the system.

“When I mentioned our need for a new power supply, Joe brought in Siemens for a demonstration and training,” Fuentes says. “The Siemens rep was an expert in power supplies. He answered all our technical questions and that motivated us to buy the equipment and test it out.”

Today, approximately 20 of EPWater’s stations have been retrofitted with the SITOP UPS1600 DC UPS system. All the components of the system are available off-the-shelf at B&M, another selling point for Fuentes.