Domestic Water Use Grew 600% Over The Past 50 Years 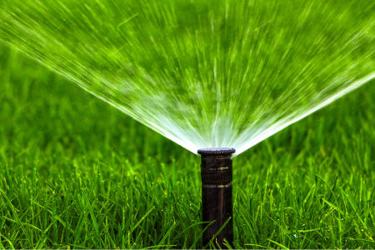 Humanity’s thirst for freshwater has more than doubled since the 1960s, keeping pace with growing populations and economies.  One-quarter of the world now faces extremely high water stress, where more than 80% of the available supply is withdrawn every year.

While agriculture and industry withdraw the overwhelming majority of the world’s freshwater (70% and 19%, respectively), demand from households is also rising precipitously. New data from WRI’s Aqueduct platform shows that domestic water demand grew 600% from 1960-2014, at a significantly faster rate than any other sector. 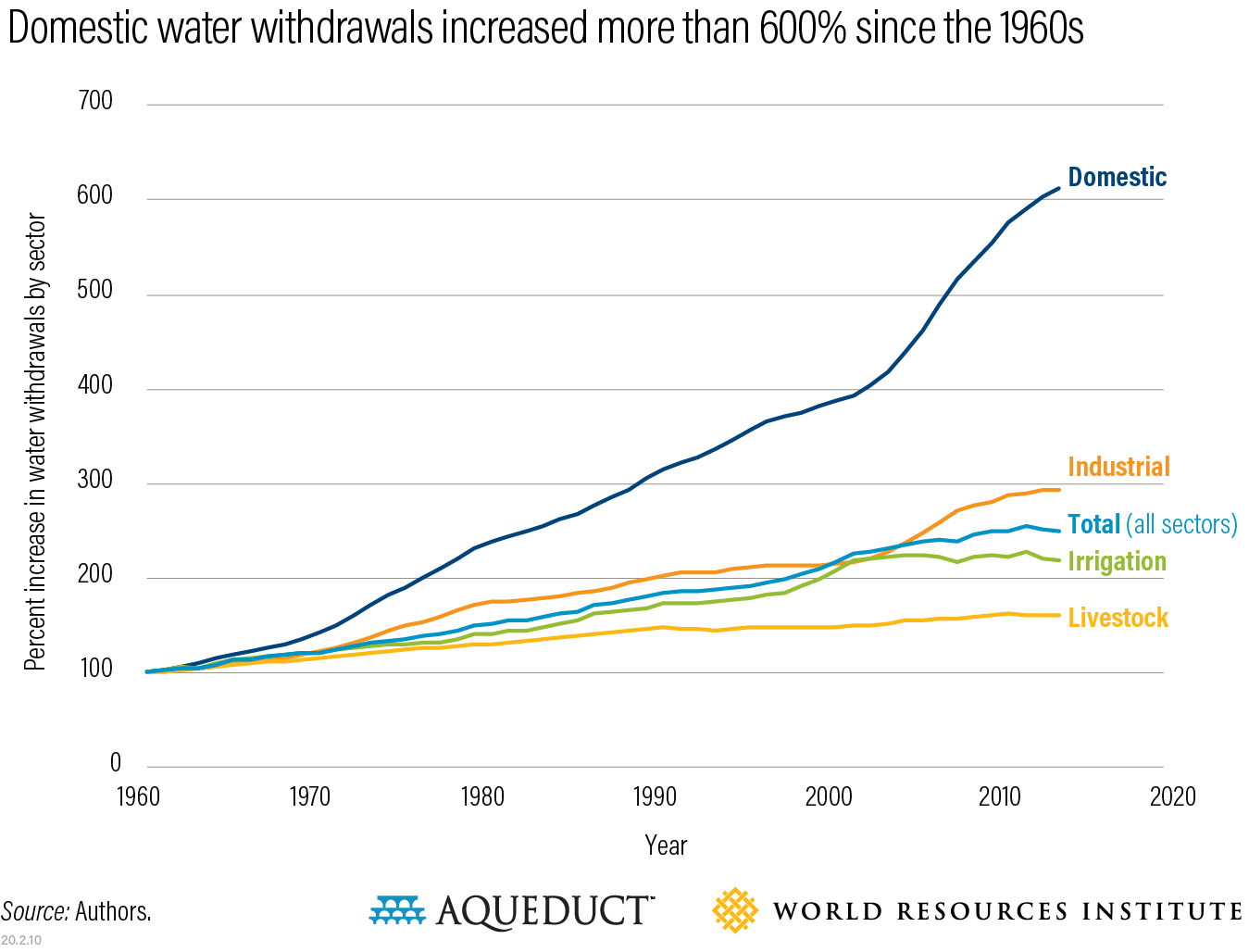 Since the 1960s, agriculture has remained by far the largest global user of freshwater, though its rate of growth has been slower than other sectors. Demand for water used to grow crops and livestock grew by more than 100% in the last century,  while industrial water demand more than tripled, thanks to rising demand for electricity, fuel and water-intensive goods like textiles.

During this same period, the world’s population grew by more than 4 billion, contributing to the six-fold growth in municipal water use. More people, more homes and growing cities require more water than ever before. We must secure water for the 2.1 billion people who lack accessible, safe drinking water, while using this resource more efficiently to prevent crises and reduce water stress.

We Need to De-couple Domestic Water Use from Socioeconomic Growth

We must enable economies and populations to grow without exacerbating water stress.

Some countries are already doing this, and they offer lessons for others. For example, total water withdrawals in the United States actually decreased from 2005 to 2015, including water used in households, even though population and GDP grew. Despite the overall decline in water use, however, the United States still has the highest per capita water use figures among 30 developed and emerging economies

How can countries reduce their household water demand, even as populations increase?

While it’s easy to put the onus on households to reduce their own water use, it’s actually most critical that companies and governments provide solutions to, investments in and incentives for reducing water demand. Here are some steps that can slow the growth of household water demands:

Companies like P&G are evaluating products’ water use over their entire lifecycles and targeting water-use reductions. When a large share of a product’s water use occurs in the household, rather than during its production, inventing and refining products so they require less water from a family’s tap can have a big impact.

One example is creating time-saving products like high-performance dishwashing tablets designed to enable consumers to skip the pre-wash, saving up to 15 gallons per dishwasher load. Dry shampoos and conditioners, waterless or dual-flush toilets, low-flow showerheads, and nozzles that automatically shut off water when not in use are other water-saving innovations.

Laws requiring household appliances to be water-wise incentivize innovation and increase the availability of such products. Many countries have energy- and water-efficiency standards and certifications for appliances.

New energy and water standards for dishwashers in the EU will take effect next year, and are forecasted to save 16 million cubic meters of water 2030, enough to meet more than 300,000 Europeans’ annual water needs. The U.S. Department of Energy mandated that full-size dishwashers use no more than 5 gallons of water per cycle, while EnergyStar certified dishwashers use less than 4 gallons. Regulations and certification over the past 20 years have resulted in American dishwashers today that use half the water they did in the 1990s; using a dishwasher is now more water-efficient than washing dishes by hand. The WaterSense and Energy Star labels in the United States and the EU’s Ecolabel are also mechanisms for governments to verify and promote that certain appliances meet top-of-the-line efficiency standards.

Creating new products does not always lead to behavior change — habits are hard to shift. Beyond innovating, companies and governments can help educate consumers on how to shift their water use habits to save money and resources.

For example, watering lawns is a huge driver of domestic water use. In the United States, roughly 30% of household water withdrawals are used to water lawns (in the arid Southwest, this percentage increases to up to 60%).  Education campaigns aimed at encouraging less watering or planting native plants suitable to local climates can enlighten homeowners on how they can cut their water usage. The non-profit Alliance for Water Efficiency has published research and guidance on programs for reducing landscaping's water demand. .

India, one of the most water-stressed countries in the world, has made strides towards water education at every level: Prime Minister Narendra Modi called for a national awareness-raising movement for saving water, including through solutions like rainwater harvesting. As a result of an education campaign by the social organization Ineedsai, more than 10,000 schoolchildren and teachers have saved the leftover water in their water bottles to be used in water plants on school campuses .

Of course, consumers can do their part, too. Part of lowering household water use means thinking beyond what comes out of the tap. The majority of people’s water footprints actually come from the foods they consume and the goods and services they purchase. For example, producing a pound of beef requires more than 7,000 liters of water, more than 50 times what’s needed for a pound of potatoes. One cotton t-shirt requires 2,700 liters. And the energy used to power homes, schools and offices mostly originates from thermal power plants, which usually require freshwater for cooling. Conserving energy, eating less red meat and buying less clothing are three unexpected ways consumers can reduce their water footprint.

One-third of major cities already face high or extremely high water stress. Competition for water will only increase as resources become scarcer and populations and economies grow. Reducing the amount of household water used per-person will play an important role in reducing water stress overall, and can help decouple socioeconomic growth from demand for freshwater.

P&G is a member of the Aqueduct Alliance, a coalition of organizations that helps fund the maintenance, improvement and development of WRI’s Aqueduct project.