This one's not on you, plant operators. Rather than a charge for utilities to aim higher in performance, the latest regulation to impact water treatment operations, as well as others, falls on equipment manufacturers — those who make pumps. The Energy Department's (DOE) new pump efficiency rule will ultimately benefit utilities and industries by saving operational costs. It will also benefit the environment, of course, as is the true intent of the regulation.

The Energy Conservation Standards For Pumps, finalized in December 2015 and effective on March 28, 2016, will not have bearing on all pumps or utilities; it affects only clean water pumps in the range of 1 to 200 HP. But for the “specific rotodynamic, clean water pumps used in a variety of commercial, industrial, agricultural, and municipal applications,” as the rule describes, the implications are significant.

For the bulk of consumers, the news is good in that DOE projects an average payback period (PBP) of less than three years on new/redesigned pumps. The Final Rule explains the PBP to be “the amount of time it takes the commercial consumer to recover the assumed higher purchase expense of more-efficient equipment through lower operating costs.” So capital costs for regulated pumps will increase on and after January 27, 2020 — the starting compliance date — but the savings should pile up for end users from the third year of ownership through the remainder of the pump’s lifespan (15 years, on average).

Manufacturers will feel the economic brunt of the rule more harshly and much sooner. DOE states that “hydraulic redesigns will result in significant conversion costs for manufacturers as they attempt to bring their pumps into compliance with the proposed standard.” Large manufacturers are better situated than smaller players, as they can more readily absorb costs in both the short-term and at the point of sale. (Certain manufacturers, such as those that gross less than $8 million annually, may apply for rule exemptions.)

For better or worse as it pertains to competing pump manufacturers, DOE reports that energy efficiency is not the main selling point or cost driver in the market. “Rather, other factors, such as reliability, may influence price significantly and are known to be more influential in the purchaser’s decision-making process,” it states.

DOE’s ruling is summarized nicely by Lauren Urbanek of the Natural Resources Defense Council, which (naturally) welcomes the action:

“The standards for the various sized pumps were set at levels jointly agreed to by industry, advocates, and other stakeholders and will remove the worst-performing 25 percent from the market. DOE surveyed the market and determined the "cutoff" efficiency level for each type of pump, taking into account energy savings, consumer benefits, and manufacturer impacts. Pumps that do not meet the appropriate efficiency level must either be redesigned or removed from the market.”

The various pump classes and associated standards are shown in the table below, provided by DOE. 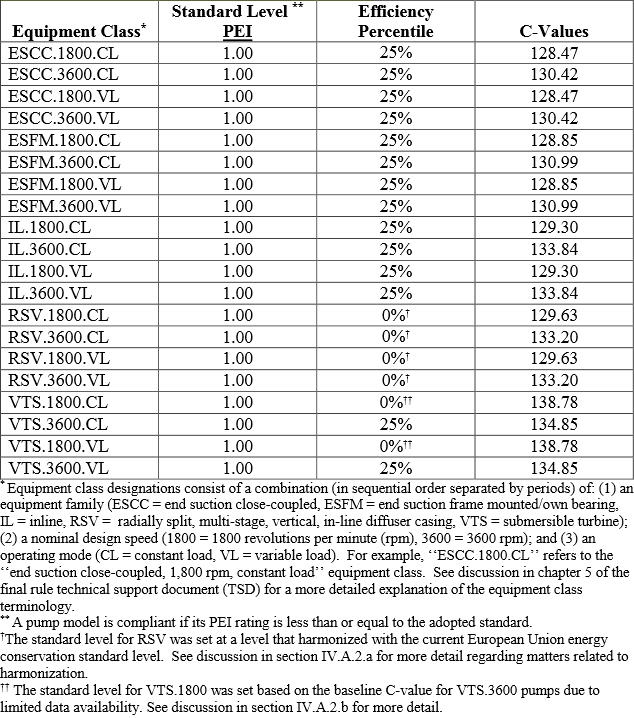 For a deeper dive into the math, analytics, and nuance surrounding the regulation, consult the Final Rule. The Hydraulic Institute (HI), which worked with DOE in developing these and other pump efficiency standards, is also an excellent resource. (Update: HI is offering a free webinar on the rule on May 3.)