Digitalization In The Water Industry: Look How Far We've Come 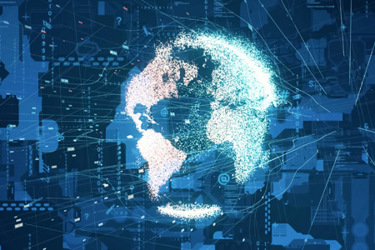 Every once in a while, I hear someone saying that digitalization, or going digital, is the next big thing in the water industry. Don’t look now, but digitalization is here; and it has been for a few decades.

Water utilities have been going digital since digital computers first became practical in the 1950s. The first people who took advantage of digital technology were the financial folks who realized you could use computers to print bills and keep track of customers who did or didn’t pay. Maybe these computers weren’t just toys.

Next it was hydraulic engineers taking advantage of the power of computers. Solving pipe networks problems involves solving thousands, or even millions, of nonlinear simultaneous equations — an impossible task manually, but one ideally suited to digital computing. Today there are very few piping and pumping hydraulic problems that are not solved on computers with hydraulic models.

If a draftsman can draw plans with CAD, they could also keep system maps on CAD. But Geographical Information Systems (GIS) went beyond CAD and actually enabled pipes to have properties like diameter and material. This made digital pipes smarter and helped support asset management, which also evolved from seat-of-the-pants judgment to reproducible, quantifiable processes.

Analog telemetry systems to keep track of remote facilities have been around for a long time, but converting them to digital Supervisory Control and Data Acquisition Systems (SCADA) has enabled this data to be used to support operational decision-making. Analog pen and ink recorders have been replaced by sophisticated digital displays and databases which can provide insights that analog charts can’t. Today, Internet of Things (IoT) devices have brought a new level of capability and flexibility beyond SCADA in some instances.

One of the biggest operational costs for water systems was meter reading. It took a little longer than some of the other digital technologies, but Automated Meter Reading (AMR) has taken over the meter reading business, feeding customer usage data back into the billing systems which started digitalization in the first place. After a few years, metering companies realized that they could get more from digital metering than just meter readings and moved on to Advanced Metering Infrastructure (AMI) to add functionality to simple meter readings.

Nowadays, when someone says the industry is “going digital,” they need to look around and realize that it already has gone digital. Are we at the end of the digital revolution? Hardly — we are just another step along the path of digitalization. Each of these digital technologies described above works well for what they were designed to do. But like children locked away in their own rooms, they didn’t learn to play well together.

One-by-one, the doors between the children’s rooms have been unlocked and the kids are having a lot more fun. Hydraulic models and GIS software can pass data back-and-forth. SCADA systems can provide the raw material for work orders. Each day, more impressive ways for these systems to collaborate are being advanced. The collaboration of these systems for the greater good has taken on the name of “digital twins.” These systems not only contain data for their original, stated purpose, but now can behave like the original real-world system they were supposed to model — a true twin. Now they can support decision-making better than any single software system, and the real water system side of the twin can be built and operated better than ever.

And the evolution is not over. Sharing data between digital systems is advancing at breakneck speed. Operations and maintenance personnel, who never thought they would use a computer in their job, are finding their work to be easier and more efficient with digital systems. Research and development teams from across the industry are investing heavily in digital technology. Even in a traditionally conservative industry like water, breakthroughs in technology seem to be happening daily. There is no end in sight.

You ain’t seen nothin’ yet!

Tom Walski, PhD, PE, is a senior product manager at Bentley Systems, Inc. He has over 40 years of experience in applied hydraulics for water and wastewater systems. He is author of hundreds of journal papers and conference presentations and is the author or co-author of several books. He serves on numerous professional committees and has held positions as university professor, manager of an engineering department, director of operations and executive director of a regional utility.