No business wants the word "toxic" associated with its operations. The world has grown very weary (and wary) of companies that aren't environmentally responsible. So while toxic wastewater as a byproduct of mining, oil refining, or other industrial processes isn't new, the impetus to treat these streams is steadily rising.

A common method to handle wastewater organics resistant to biological treatment is through AOPs, or advanced oxidation processes, the broad principles of which are nicely outlined here. In short, AOPs use oxidizing agents/hydroxyl radicals to turn toxic organic compounds into biodegradable material (mineralization). The more hydroxyl radicals generated, the more effective the treatment, so the search is always on for the best oxidant for a particular application. While ozone, hydrogen peroxide, and oxygen are popular in municipal settings, they fall short for highly toxic wastewater and also require significant energy to induce oxidation. This has given rise to electrochemical-based AOPs and synthetic oxidants, with the ‘Holy Grail’ being an electrode that maximizes oxidation/treatment, requires low energy, and can stand up to harsh environments.

BDD is used in the downstream oil and gas (O&G) industry for a notoriously hard-to-treat waste stream — spent caustic from the refining process, which produces high chemical oxygen demand (COD) levels along with a mix of oil, mercaptans, sulfides, and other compounds. BDD is one of just a few technologies to survive and thrive in this environment, and is thus capable of handling a variety of waste streams. Beyond extraction and mining, suitable applications include textile dye water, pharmaceutical wastewater, and highly polluted municipal waste such as landfill leachate.

Effectiveness aside, the cost of treatment is naturally a concern for municipalities and private industry alike. Any advanced treatment option may be considered “over-treatment” where basic and conventional technologies can be utilized, which is why the focus for BDD remains on downstream O&G. In this setting, wet air oxidation (WAO) is the method of choice for AOP that is most predominant and effective at many large refineries where economies of scale can be leveraged. WAO frees hydroxyl radicals via steam injection; it requires high heat and pressure, in addition to a space-intensive, complex setup. But for smaller refinery operations without significant size and capital, WAO is cost-prohibitive.

BDD oxidation can be achieved with much lower capital requirements using a modular electrochemical reactor, greatly reducing startup and overall treatment costs for low-volume waste streams. According to Tim Mollart, principal applications engineer at synthetic industrial diamonds supplier Element Six, BDD AOP would be the more sensible and cost-effective new treatment option — as opposed to starting up with WAO — for a “pretty big portion” of the 650 or so refineries he estimated worldwide. 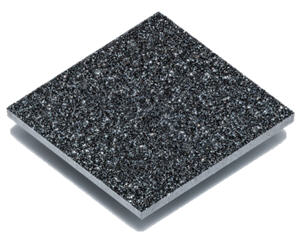 There are more readily available treatment options in O&G than BDD, namely deep well injection, incineration, and off-site disposal, but these will become increasingly unavailable as corporate responsibility and/or regulatory authority proliferates. Small-scale refineries and industries turning to AOP, or the systems providers that supply AOP equipment, have a range of oxidants from which to choose. Since BDD is somewhat new in practice (though the product of 20 years of R&D), here are some specific benefits to know about the Element Six version of BDD, cited by Mollart.

Inert semiconductor material. The robust nature of BDD is credited to its inert nature. While most electrically-conductive materials fall victim to oxidization and corrosion themselves, BDD does not.

Electrically-driven. BDD’s oxidizing strength is owed to its metal-like conductivity triggered by simple DC power and an electrochemical reactor, with no need for the strong oxidizing reagents such as hydrogen peroxide or hypochlorite that are required by most AOPs.

Sustainable technology. Deep well injection can pollute and waste scarce water resources; incineration can contribute to air emissions; conventional AOPs require the purchase, storage, and handling of dangerous chemicals; and off-site disposal has a considerable carbon footprint while scurrying the problem down the road. Compared to the most common alternatives for difficult waste streams, BDD is inherently safer, more easily replenished, and friendlier toward the environment.

Is boron-doped diamond the ‘Holy Grail’ of AOP materials? It’s far too early to tell — new tech has the burden of proving itself over the long haul and in the face of evolving developments. As such, BDD will be rightly scrutinized, but it should also be rightly considered for its potential.