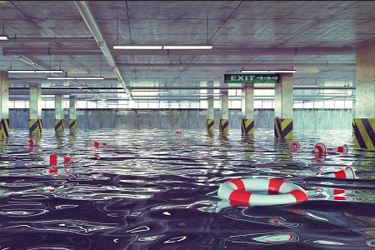 A drinking water and wastewater utility serving almost 40% of Michigan’s population is pushing back against accusations that issues with its infrastructure caused major flooding damage in 2021.

“The Great Lakes Water Authority [GLWA] announced … that they’ve denied about 24,000 claims from victims of last year’s extensive summer flooding after a probe found that heavy rainfall was the primary cause,” according to the Detroit Free Press. “Under Michigan law, the city or GLWA can be held responsible only if there was a defect — one it should have known about — that it didn’t fix and was 50% or more at fault for the flooding.”

Following a June 2021 storm that saw more than six inches of rain overload the region’s wastewater systems, a state of emergency was declared for Detroit and its surrounding county. Streets and basements were flooded and GLWA’s local water pumping stations did experience issues.

“Due to an electrical service issue, only three of six pumps at one station could be brought online, while a power outage at a second station slowed efforts to turn three of its pumps on as the rain poured,” according to the Associated Press.

More than 67,000 Federal Emergency Management Agency (FEMA) claims and around a dozen lawsuits against GLWA and other agencies have been filed, per the Free Press.

“For the vast majority of affected homeowners, their insurance policies won’t cover the costs of the flood damage, according to Paul Doherty, managing attorney at Ven Johnson Law, which represents about 600 people who sustained flood damage and which filed a class-action lawsuit over the claims,” per the Associated Press.

The independent probe into the performance of GLWA’s stormwater systems, ordered by the water authority’s board and completed by engineering firm AECOM, ultimately found that the flooding was inevitable due to the unprecedented amount of rainfall that hit the region. With that determination, GLWA plans to notify people by mail that it will be denying their claims.

“Even if every piece of piping and equipment in the regional system worked in an ideal manner … basement backups and surface flooding would still have occurred in GLWA’s system, or any other collection system designed to today’s standard,” GLWA concluded, per the Associated Press.