Determination Of Pesticide Residue In Vegetables 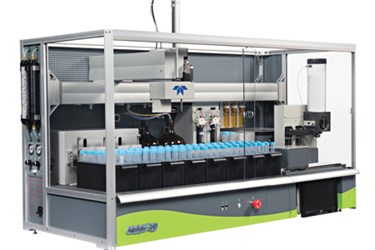 QuEChERS is a Quick-Easy-Cheap-Effective-Rugged-Safe extraction method that has been developed for the determination of pesticide residues in agricultural commodities. While the original unbuffered method was developed for plant matrices, since 2003, two additional buffered methods were created and adapted to many additional matrices such as vegetables. The rise in popularity of the QuEChERS technique and the increase in sample testing have driven the need for automation for this extraction technique. The AutoMate-Q40 streamlines the two part QuEChERS method from the solid/liquid extraction to the dSPE cleanup step.

The aim of this project is to demonstrate the performance and versatility of the Automate-Q40. An LC-MS/MS was used to determine pesticide residues in vegetables, particularly in tomatoes and green beans. Pesticide residues were extracted from the vegetables using the AutoMate-Q40. Quantification was based on matrix-matched calibration curves with the use of internal standard to ensure method accuracy (Document N° Sanco/12495/2011). QC samples were evaluated at levels of 20.0, 40.0 and 80.0 ng/g to ensure precision and accuracy of the AutoMate-Q40. The limit of quantification (LOQ) of this method was determined to be 10.0 ng/g.