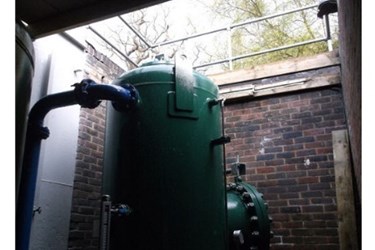 Worcestershire-based Quantum Engineering Developments (QED) was called in by contractor Bam Nuttall when one of the DAF saturator vessels in the plant failed a routine inspection by the insurers and needed to be replaced.

Improved design
QED’s operations manager Tim Harper said: “QED was called in in April when one DAF vessel had been taken out of commission. It had reached the end of its natural life and the interior was suffering from corrosion, but South East Water also wanted to see if the original design could be improved.”

Tim Harper said: “During the upgrade South East Water was keen to look at every part of the process to make sure it was working as efficiently as possible. When one of the DAF saturator vessels was taken out of commission it gave us a chance to see if there was any way to make the design more effective.”

The DAF saturator vessels at Pembury are used for aeration, generating white-water which is then pumped into filter lanes where the solids are skimmed off.

As the aerated water passes along the filter lane, solids stick to the bubbles as they rise to the surface. Slow moving scrapers then pass over the surface of the filter lane removing a layer of bubbles, and taking the solids along with them.

Engineering challenge
Tim Harper said: “One of the main challenges with this job was that the new DAF vessel had to be made to fit into the same place as the old one. The size of the vessel could not be changed, but QED believed the DAF vessel could be adapted to bring it closer to the optimum design.”

As well as replacing the vessel QED, which has more than 20 years experience in designing vessels for pressurised systems, advised Bam Nuttall and South East Water to modify the way it was configured, suggesting the inlet pipe should be moved to the top of the DAF vessel, rather than remaining at the bottom.

QED advised the client that by changing the position of the inlet pipes, adding a distribution spreader bar and installing extra features inside the vessel, the vessel would operate more efficiently. Internally, the DAF vessel would be fitted with a plenum floor and optimally-sized pall rings, which would increase the surface area on the inside of the tank and make the distribution of air more efficient.

It was important to create hatches to allow the replacement vessel to be inspected from above, from the side and from below – without the need to empty it of water. Such modifications will cut down the time and cost of inspections significantly and reduce health and safety risk.

Two-day installation
The replacement DAF vessel was installed over the course of two days in April 2015. The 2.5-tonne vessel was made of carbon steel, and applied with a solvent-free internal coating compliant with Drinking Water Inspectorate standards.

Contractor Bam Nuttall had to remove a section of the roof of the water treatment plant in order to get the 3.6m by 1.1m vessel into place. While work was carried out, water treatment operations continued at the plant using the second DAF saturation vessel, which was still in use.

Power efficiency
Once the replacement DAF vessel was in place the results of the redesign were monitored by South East Water.

“The new design was more efficient and cut down energy use, so it was decided to go ahead and replace the second DAF vessel at the plant straightaway.”

Bam Nuttall and South East Water ordered a second DAF saturation vessel with a similar design, which was installed at the Kent treatment plant in June 2015.

Joe Yip, Delivery Manager at South East Water said: “By improving the basic design of the DAF vessels at the Pembury plant, QED was able to make them more efficient. During the upgrade of the Pembury plant, South West Water was keen to look at ways to make every part of the water treatment process as efficient and robust as possible.

“The improved design of the two DAF saturation vessels will reduce energy costs at the Pembury plant which is good news for our customers.”

About QED
Quantum Engineering Developments Ltd (QED) is an industry leading engineering company specialising in the supply, installation and refurbishment of Surge Control Systems; bespoke compressor packages for DAF and backwashing; and instrumentation and controls. For over twenty years QED has been successfully supporting and servicing all the major water utilities in the UK. To ensure the superior quality of our service QED only uses in-house engineers, specifically qualified and trained in this specialist area.