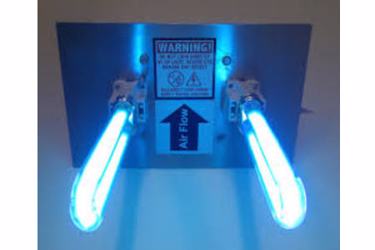 A system of lamps is what generates the appropriate levels of UV light to eradicate the pathogenic content of the water to be treated. In general, UV lamps consist of some type of metallic filament that provides an electrical arc that excites mercury vapor. Exciting the vapor will cause it to heat up and increase pressure within the tube and give off UV radiation. For disinfection, the sub-type of UVC is desired, but at that short wavelength the light cannot pass through typical glass, so a sleeve made of quartz makes up the main body of the lamp.

Output: refers to the intensity of the UV radiation given off by the UV lamp. Output is dependent on the pressure in the lamp, which is produced by increasing temperature.

Pressure: refers to the internal gas pressure of the lamp. The pressure level of the gas determines the radiation it will give off. In mercury-vapor lamps, only low or medium pressure will net UVC light. Higher pressure will also produce light in the visible spectrum.

In a majority of industrial, commercial, and municipal water treatment systems, facilities tend towards two particular lamp types to handle the flow rates of the water to be treated.

These are more simply referred to as medium-pressure (MP) lamps because they cannot be operated at a low-output intensity. These are the most powerful UV lamps that are the most efficient at higher flow rates in facilities with small space requirements and can afford higher power consumption.

LPLO disinfection systems aren’t as commonly used because they aren’t as effective as LPHO or MP systems at large flow rates and would require significantly more UV lamps. However, they are the most energy-efficient of the three systems and would be cost effective for much smaller applications.

Use of any one particular lamp in a disinfection system may be more or less advantageous depending on the application. A typically safe bet would be to go with LPHO, which has a bit of the best of both worlds with greater energy efficiency and lamp life than MP and is more effective at killing pathogens with fewer lamps than LPLO.

In addition, UV lamps using LED technology will be something to review in the near future as data is published on its germicidal effectiveness due to its low operational power cost.

However, the system designer will be able to analyze any input and output requirements to select the most effective and efficient solution for the clients project.