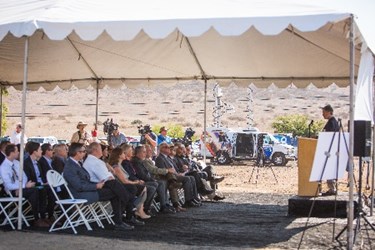 As the United States forecast a surge in energy demand and consumption over the winter period, Biwater and NeoTech Aqua team up to highlight their energy-saving work in California, centred on a new and innovative water reuse demonstration project with the Padre Dam Municipal Water District.

Typically, year-on-year trends show that energy demand and consumption peak twice across the country during any one year, from December to February and June to September. This year’s forecast for December sees the United States set to consume 10,505 mkWh/day, with consumption increasing to 11,165 mkWh/day and 11,233 mkWh/day over subsequent months1.

Residential, industrial and commercial entities are large consumers of electricity, be it via electric power producers or on-site generation. With an average annual increase in total electrical consumption of 0.9 percent, it is estimated that the country’s overall consumption will rise from the 3,826 bkWh recorded in 2012, to as much as 4,954 bkWh in 20402.

Having broken ground on the Advanced Water Purification Demonstration Project, the Padre Dam Municipal Water District have made a firm commitment to harness the latest energy saving technologies to keep future energy consumption requirements to a minimum. Their approach is helping to address a pressing need to find a new source of water to combat ongoing droughts, while also ensuring low operational costs (OPEX) to bring long-term savings to the district if the facility is scaled up following its year-long demonstration period.

The plant will leverage state-of-the-art ultraviolet (UV) technologies for a safe, reliable, drought-proof and environmentally sound solution to the region’s water woes. According to Richard White, Senior Vice President of Biwater’s Desalination and Membrane Treatment Sector, “The use of NeoTech Aqua Solutions’ newly validated UV technology is a perfect example of how Biwater continues to provide the most advanced water treatment technologies available. We are leveraging the latest in UV technology, providing our clients with the smallest possible footprint, the lowest possible energy consumption and the highest level of reliability.”

According to Stephen Dunham, NeoTech Aqua’s President, “By reflecting nearly every generated UV photon back into the treated water, fewer lamps are required, translating to substantially less power consumption, less equipment footprint and less maintenance for the UV system. The economic, operational and reliability advantages of NeoTech Aqua’s UV offering are game-changing.”

The Western United States is suffering one of the most severe droughts in decades and after multiple declared emergencies by California Governor Jerry Brown, water agencies are aggressively seeking solutions. According to Allen Carlisle, Padre Dam’s CEO and General Manager, “With the current drought situation and Padre Dam being 100 percent dependent on imported water, it is extremely important that we find a way for East County to diversify its water supply. I am confident and hopeful that the demonstration plant will be successful.”

In addition to NeoTech Aqua’s UV technology, Biwater is installing the latest ultrafiltration and reverse osmosis units, including the programmable logic controller (PLC) and plant instrumentation to support the project’s daily testing requirements.

Biwater and NeoTech Aqua Solutions are working in conjunction with engineering firms Trussell Technologies, Kennedy/Jenks, and Brown & Caldwell on the project.

About Biwater
Biwater provides large-scale water and wastewater solutions for clients across the world. Since its inception in 1968, Biwater has gained recognition for its innovative approaches aimed at overcoming the world’s most pressing water-related challenges. Throughout its history, the company has grown to meet the demands of many water stressed countries and their burgeoning populations – financing, consulting, process engineering, designing, constructing, operating, maintaining and owning water facilities – in both rural and urban environments.

About NeoTech Aqua Solutions
NeoTech Aqua Solutions specializes in the development, manufacturing and sales of high-efficiency UV systems for disinfection and TOC reduction in water treatment applications. Since 2002, the company has secured multiple patents on UV technologies which reduce power consumption, space requirements and operational costs by up to 90 percent compared to standard UV systems. For more information, visit neotechaqua.com.