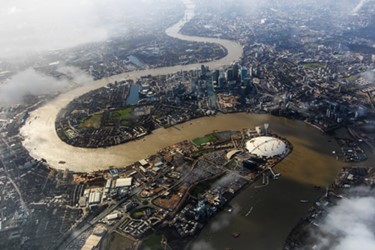 Flood modeling isn’t new, but it has become more advanced and important as we understand the potential of the cloud(s).

Some half-a-million homes, eight power stations, more than 80 railway and Tube stations, and Westminster Abbey and the Houses of Parliament — comprising 1.3 million people and £275 billion (~US$362 billion) worth of property — reside along the iconic River Thames waterway in London. Settlements along the Thames trace back to as early as 50 C.E., when the Romans developed a riverside port community. 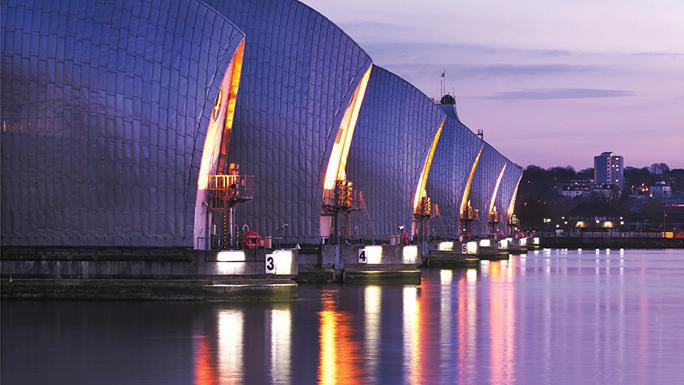 Despite the River Thames’ usual tranquil state, much of London is built on its significant floodplains, and sporadic tidal flooding has plagued communities throughout history. In 1928, floodwaters burst over the river’s flood defenses, swamping some of the city’s most famous buildings and submerging narrow streets under four feet of water. The flood obliterated the homes of thousands, took the lives of 14, and inspired the city to raise its embankments. However, even this precaution proved ineffective at combating the devastation from the North Sea’s worst storm surge on record in 1953, which flooded some 180,000 acres of England, damaged 24,000 homes, and caused upwards of 300 deaths — the last serious loss of life in the Thames estuary.

Today, the entire floodplain is protected by an integrated system of warnings, locally formulated plans, and flood defenses, including the 520-meterslong Thames Barrier that, when its main gates are raised, stands as tall as a fivestory building. These assets and future solutions are the focus of the Thames Estuary Asset Management 2100 (TEAM2100) Program, an extensive flood management program incorporating a series of protective infrastructure and provisions to optimize returns on Thames flood defense investments, many of which are more than 30 years old and, in some cases, more than 100 years old.

Flood Modeling In A Digital Age

For more than a half-century, flood modeling has underpinned the development of flood risk management solutions. From its initial use in the design of flood defenses, flood modeling is now a key element of most flood risk management responses, including flood forecasting, community awareness raising, operational control, development control, and risk-based asset management. It has also become widely used by the insurance sector, helping underwriters to understand the risk and probability of flooding.

Fundamental physics principles that enable us to calculate flood risk have long been well understood thanks to the likes of Isaac Newton and Archimedes, and we have a good selection of welldeveloped and proven software packages that enable modelers of all skill levels to apply these principles. The continual advances in these software packages along with significant and continuous advancements in computing technology, data capture methods, and data availability have fueled demand for more detailed and robust analysis, also providing greater understanding of the certainty (or uncertainty) of flood risk.

This is particularly the case within cities, such as London, where flood models need to run at high spatial resolutions to resolve complex topographies (such as roads and buildings) that increase the computational effort. Furthermore, assessing a range of options that could be developed to improve cities’ resilience to floods in the future requires many computer simulations, especially when considering the uncertainty of future climate variability. With the demand for increased analysis, which may require many thousands of simulations that take several hours or even days to complete, there is the need for more computational resources and the specialist software licenses needed to undertake the analysis. For many organizations the cost associated with this is prohibitive or simply not a wise investment, as there might be substantial periods when they are not in use.

In today’s data-driven society, as cloud computing gains traction from movie streaming to document editing, there has been a growing expectation that cloud computing could be the solution to providing an easier, unlimited, and affordable flood modeling tool.

Enter the Flood Cloud service, which combines today’s technological solutions and proven Flood Modeller software into a dynamic solution providing on-demand access to climate and resilience intelligence for anyone who needs it. Flood Cloud provides the platform to create a step change in the way we understand and interpret modeling, and the Climate Change Business Journal recently recognized its game-changing possibilities with a 2018 Technology Merit award in the Climate Change Risk Modeling and Assessment category.

Protection On The Ground, From The Cloud

Flood Cloud, and its related Flood Modeller software, are used to support many flood risk management activities. In London and the Thames Estuary, Flood Modeller is providing accurate representation to guide the operation of major structures such as the Thames Barrier and the flexibility to select either a one-dimensional (1D) representation, two-dimensional (2D) representation, or a coupled 1D (channel) to 2D (floodplain) model. These attributes mean that those using it to support critical operational decisions, such as when to close the Thames Barrier to protect London, can be fully confident in the model’s ability to provide robust water level estimates on demand. 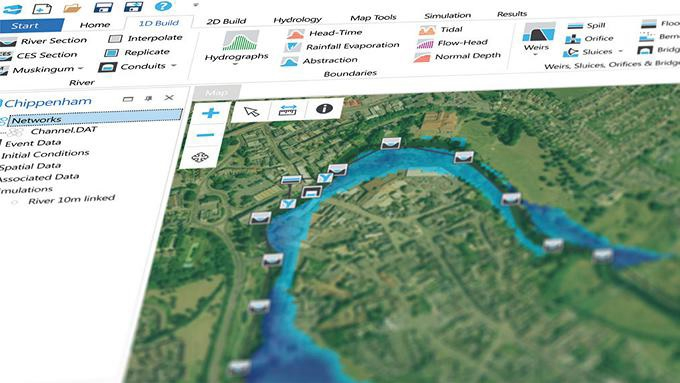 In a recent study along the River Thames upstream of London, Flood Cloud ran multiple simulations to help evaluate the impact of catchment-wide storage schemes to mitigate climate-change driven increases in fluvial flooding for the Thames Catchment, delivering potential improved protection to thousands of homes and businesses. Additionally, Flood Modeller is:

The impact of future climatic variability remains uncertain yet has the potential to significantly increase the exposure to severe flood events in cities. By the end of this century, researchers estimate that the frequency of floods will increase across 42 percent of land on Earth and that 27 to 93 million people will be affected by devastating flooding. Improving our understanding of flood risk in cities is vital to ensuring that cities remain as resilient to both present day and future flooding as possible. By allowing users to run many more simulations than they were previously able to, Flood Cloud provides us with the opportunity to understand flood risk in cities in more detail than ever before, providing unprecedented social, economic, and environmental benefits for communities facing climate threats.

Dr. Richard Crowder, Growth Manager (Water Environment – Europe), provides leadership in water and environment services for Jacobs, including direction for the Flood Modeller software. He is the client manager/program manager delivering a Jacobs program of work to England’s Environment Agency (EA), as well as Jacobs’ framework manager delivering flood modelling, mapping, and forecasting services to the EA. Richard has a PhD in physical and computational modelling.