Until recently, chemically enhanced primary treatment (CEPT) wasn’t considered a viable option for removing phosphorus to very low levels — even less so when used with membrane bioreactors (MBR).  The trailblazing design of a new reclamation facility in Spokane, WA, has given new view to nutrient removal.

Complying with one of the most stringent phosphorus limits in North America was only the beginning of the challenge for CH2M HILL, the consulting engineers enlisted to design, build, and operate the new Spokane County Regional Water Reclamation Facility (SCRWRF) in Spokane, WA. A variety of ambitious performance demands and design specifications forced an innovative approach, resulting in what is today a precedent-setting and award-winning facility.

SCRWRF was needed to accommodate future population growth and facilitate the disconnection of septic tanks in Spokane County, but its design was geared toward meeting the water-quality requirements of the Washington Department of Ecology. The Spokane River (to which SCRWRF would discharge) and the Lake Spokane reservoir had long been plagued by algae blooms and dissolved oxygen (DO) limitations, prompting strict limits on nutrients such as phosphorus, ammonia, and carbonaceous biochemical oxygen demand (CBOD). Therefore, from the moment the 8-MGD facility started up in late 2011, it was subject to a permit requirement of just .05 milligrams per liter (mg/L) — or 50 micrograms per liter (µg/L) — based on an eight-month seasonal average from March 1 to October 31.

As a reclamation facility, the effluent also had to meet Washington’s Class A reuse requirements, suitable for irrigation, commercial and industrial uses, fire suppression, enhancing wetlands, indirect groundwater recharge, and stream flow augmentation. Spokane County further dictated in the request for proposal (RFP) that the method of treatment must incorporate membranes for filtration and an anaerobic digester to produce Class B biosolids (to be recycled as fertilizer) and to support cogeneration of heat and electricity.

To ensure sustainable operations well into the future, the greenfield project was alotted 20 acres of land — room enough to grow to three times its current size and accomodate up to 24 MGD. 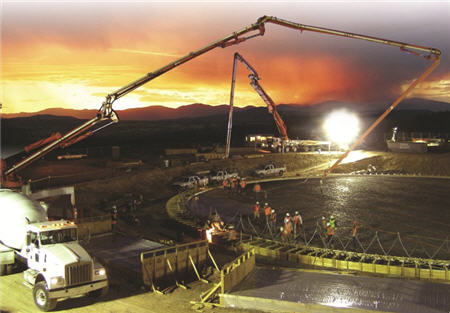 The combination of technology and effluent mandates required creative thinking, with few real-world examples to lean on. Instead, CH2M HILL ran a variety of plant configurations and treatment options through plant simulation, or “whole-plant process modeling,” which could calculate, document, and predict outcomes for various scenarios.

Because a membrane application was mandatory, the design team evaluated treatment trains that would incorporate either membrane bioreactors (MBRs) or tertiary membrane systems. In working through the options, however, CH2M HILL also had to consider yet another all-important wrinkle at the behest of the County: the solution must balance the lowest risk of noncompliance with the lowest possible life-cycle costs.

A tertiary membrane system was considered in concert with conventional biological phosphorus removal (BPR), but was discounted because of the complexity, footprint, and capital costs associated with BPR. Another strike against BPR, according to Bruce Johnson, principal technologist at CH2M HILL, was that BPR is subject to slight variances in phosphorus levels, sometimes resulting in one-day excursions from target levels. These slight inconsistencies — especially when there is minimal room for error — can often throw off the seasonal average and result in noncompliance.

By default, MBR became an essential element in the process, but the challenge remained to fit it into a phosphorus treatment process capable of reaching .05 mg/L. The solution that arose was chemically enhanced primary treatment (CEPT) followed by a step-feed MBR system, with both using metal salts (ferric chloride) to precipitate phosphorus.

According to Johnson, this integrated CEPT/MBR approach is extremely novel — SCRWRF being the only facility, to his knowledge, that utilizes MBR and operates at such low phosphorus levels.

Minus the MBR component, there was evidence — a small but convincing sample — that metal salts could effectively and consistently remove phosphorus. In particular, Johnson acknowledged DC Water’s Blue Plains facility, which uses ferric chloride with conventional filtration, as a pioneering model for SCRWRF. Based on this rare case study and other foundational research, CH2M HILL knew there were two keys to successful and economical deployment of metal salts for phosphorus removal: the initial mixing intensity and appropriating the right amount of contact time.

This knowledge spawned an innovative idea — the inclusion of an aerated grit tank, created as a pit-stop between the headworks and the primary clarifiers. The grit tank, it was discovered, provides optimum conditions for the high-speed mix and the initial dose of ferric chloride.

“It’s actually one of the first aerated grit tanks CH2M HILL has designed in quite a while,” said Johnson, “It’s ideal for getting good contact between the metal salts and the phosphorus, and flocculating it before it goes to primary treatment.”

From the aerated grit tank, the stream goes to the primary clarifiers (CEPT) for precipitation and settling of the soluble phosphorus. Another round of ferric chloride further draws down phosphorus in secondary treatment, applied directly to the MBR. The dose is added near the end of the bioreactor, just before the membrane tanks, to take advantage of ferric chloride’s rapid uptake of soluble phosphorus and bring total phosphorus to its lowest possible levels.

Interestingly, the ferric chloride bound with phosphorus — referred to as metal hydroxide flocs — retains the capacity to hold more, and can be recycled to limit phosphorus production in the anaerobic digesters.  The bound phosphorus also remains bio-available for other processes, supporting both nitrogen removal and digester gas production (for cogeneration). This interplay with and impact on other systems is precisely what made the SCRWRF treatment train such a challenge, but it was one that ultimately paid off.

Two and a half years after construction commenced, SCRWRF went online on December 1, 2011, working at 85% capacity (a high rate for a new facility) and serving a population of roughly 100,000. Since then, the effluent returned to the Spokane River during the nutrient removal season has been consistently below the 0.05 mg/L total phosphorus requirement, ranging between 0.035 and 0.045 mg/L (reduced from a 12-month influent average of 5.9 mg/L). Furthermore, ammonia effluent levels are less than 0.25 mg/L (from 30 mg/L) and CBOD is less than 2 mg/L (from 179 mg/L).

With regard to the design-build-operate delivery method, he added: “The County knew we weren’t ready or able to operate an exceptionally sophisticated treatment plant. That’s why we decided it makes sense to have design-build paired with operation.”

Part of the plant's sophistication is a supervisory control and data aquisition (SCADA) system custom-built to operate the facility. The SCRWRF staff includes nine full-time CH2M HILL employees, each trained to maintain operations if any aspect of the SCADA system comes offline. Barring that circumstance, Moss noted that SCADA minimizes the labor effort and "makes everything so much more efficient."

The capital cost for SCRWRF came in at $172 million — $143 million for the design-build and an additional $29 million for conveyance infrastructure and ancillary costs — financed through ratepayers over a payback schedule of 20 to 25 years. The cost of not building the facility, however, could have been much more. Water quality is being restored to the Spokane River and Lake Spokane, some of the burden from the existing downstream plant has been temporarily lifted, and thousands of septic systems were taken out of service for good, which also helps protect the Spokane-Rathdrum aquifer.

In the past year, SCRWRF has been honored with a host of awards, including the Washington Industrial Energy Leaders Award for innovative energy management and the Design-Build Institute of American National Award for its integrated design approach. If necessity is truly the mother of invention (or innovation, in this case), Spokane County did well to compel CH2M HILL’s out-of-the-box thinking through its strict standards for phosphorus removal and operational efficiency. As a result, municipalities from all over can reference a newly proven method to achieve both.

What experiences can you share regarding the chemical treatment of phosphorus? What other options have you utilized to get to ultra-low levels? Are these mandates even reasonable? Please share your thoughts.