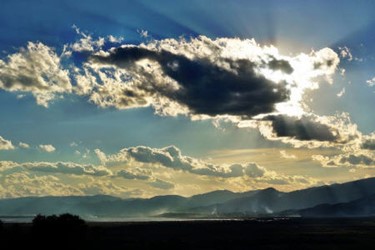 I have a confession to make. Although I’m an empathetic person in general, I have found it hard to worry very much about the state of the world once I’m no longer part of it.

It is an admittedly myopic view that can affect my response to climate change news and warnings — those dire predictions about what might happen in 50 or 100 years. While I believe the climatologists, I wasn’t feeling much personal anxiety because, I thought, I won’t be around to see the worst of it.

Believe me, I know how that sounds. I do try to be as “green” as possible, but that may be because it’s easy and convenient — turn off the tap or the light switch, separate recyclables, choose paper over plastic, etc. It’s when it becomes inconvenient, when it takes investment or sacrifice, that our commitment is truly tested. Adhering to the cause may require trade-offs.

In some ways, this is the decision-making quandary of utilities and city leaders. Many will choose to focus on today’s challenges and outcomes before worrying about “what if ” scenarios down the line. That boots-on-the-ground pragmatism is certainly fine, so long as we don’t also bury our heads in the sand. In the case of climate change, the stakes are too high — and, I’m finally convinced, too close for comfort.

Two major reports on climate change, both released in late 2018, have painted a grim picture for current times and the near future. The Fourth National Climate Assessment (NCA), published by the U.S. Global Change Research Program (USGCRP), a federal program mandated under Congress, notes that “The quality and quantity of water available for use by people and ecosystems across the country are being affected by climate change, increasing risks and costs to agriculture, energy production, industry, recreation, and the environment. …Our Nation’s aging and deteriorating infrastructure is further stressed by increases in heavy precipitation events, coastal flooding, heat, wildfires, and other extreme events, as well as changes to average precipitation and temperature.”

And if it takes economic impact to shake you, the NCA also states that “...the continued warming that is projected to occur without substantial and sustained reductions in global greenhouse gas emissions is expected to cause substantial net damage to the U.S. economy throughout this century, especially in the absence of increased adaptation efforts.” The USGCRP projects that the cost could reach hundreds of billions of dollars, or 10 percent of current U.S. gross domestic product, by the end of the century — which is a long way off, but we would also feel the decline every step of the way. (It also suggests that economic interests are aligned with, not antithetical to, environmental protection.)

The UN’s Intergovernmental Panel on Climate Change report, commissioned at the Paris Agreement in 2015, stresses urgency and the need for “societal transformation” …or else.

At a 2°C increase in global warming relative to pre-industrial levels, a projected 427 million more people would suffer food and water insecurity, climate risks, and adverse health impacts as compared to the impact at 1.5°C. Even at the target threshold of 1.5°C (we are currently ~1°C) — which is an ambitious goal, requiring a 45 percent reduction in greenhouse gas emissions by 2030 and “net zero” emissions by 2050 — the world will still endure more heat waves, floods, and droughts; up to 90 percent loss of coral reefs; damage to crops and fisheries; and threats to global economic growth. Currently, we are on pace to reach 1.5°C in 2040 — when most of us will still be around.

With the best-case scenarios forecasting an increase in severe weather (and thus water) issues, nonaction is tantamount to malpractice. Water managers must figure out how to mitigate and adapt, and how to serve the interests of both today and 50 or 100 years from now. Thankfully, trade-offs might not be necessary, as explained by Stantec’s Art Umble in his article, “Addressing Impacts Of Climate Change At The Local Level: Mitigate Or Adapt?” — part of our annual “Top 10 Trends” edition of Water Innovations.

It’s one thing to feel disconnected from future generations, but another thing entirely to disregard them. They deserve clean water and a healthy planet, and our generation can’t be the reason they don’t get it.

And now, finally, I get it.