Cattle Found To Be Major Cause Of Water Scarcity 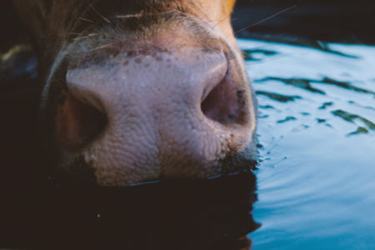 Persistent water stress throughout much of the U.S. is linked to multiple causes, including climate change that is warming temperatures and growing populations that put additional strain on available source water. And now, a recent scientific analysis is pointing the finger at another culprit: the cattle industry.

A scientific study published in Nature suggests that cattle are one of the major drivers of water shortages, primarily because of the water required to grow the crops that feed them.

“Across the U.S., cattle-feed crops, which end up as beef and dairy products, account for 23% of all water consumption,” The Guardian reported in a summary of the study. “In the Colorado River Basin, it is over half.”

The Colorado River Basin services some 40 million people in seven states, and is so overdrawn that it rarely reaches the ocean as it once did regularly, per the report. But it is far from alone as a drought-stricken water source in the country. Lake Mead, as another example, hasn’t been full since 1983 and has been reduced by nearly two-thirds over the last 20 years — and almost 75 percent of that decline has been caused by cattle-feed irrigation, the study found.

“It takes a lot of water to make a double-cheeseburger,” according to The Guardian, as it framed the impact in a way many Americans may better understand. “One calculation puts it at 450 gallons per quarter-pounder. The study also found that most of the water-intensive beef and dairy products are being consumed in western cities.”

For those who are concerned about rising source-water scarcity, it’s clear that new solutions and changes to old behavior are needed. The researcher behind the study proposed that leaving farmland idle without irrigation, a practice known as “fallowing,” may be needed.

“[The researcher] noted that the strategy should be temporary and rotational, and that ranchers should be compensated because they lose income growing nothing,” per The Guardian. “Fallowing is at least twice as effective as other water-saving tactics, according to [the] analysis.”

Plant-based meat alternatives may also help with growing source-water scarcity, as consuming less beef and dairy may be the only real solution to this growing stress on the water supply. A meatless Beyond Burger generates 90 percent fewer greenhouse gas emissions and has almost no impact on water scarcity, according to the report summary.