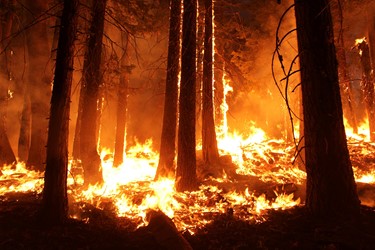 To illustrate the pervasiveness of damage caused by California’s rising epidemic of wildfires, researchers are now connecting the problem to an influx of dangerous contaminants in drinking water delivery systems.

Due to increasingly dry conditions, California’s forests are becoming highly susceptible to rampant wildfires, a trend highlighted by the so-called “Camp Fire” in November 2018, the state’s most destructive wildfire on record. In addition to damaging property and jeopardizing lives, this most recent catastrophe presented massive obstacles for drinking water treatment operations.

“In the aftermath of the blaze, government officials discovered yet another, unexpected casualty: the local water systems,” according to Undark. “Many of the region’s underground water pipes were contaminated with benzene and other cancer-causing chemicals, and they were sending that water into the buildings left standing.”

Earlier this year, a report from NBC News tied the influx of chemicals to firefighting efforts during the blaze.

“Officials said they believed the contamination happened after the November firestorm created a toxic combination of gases in burning homes that got sucked into the water pipes as residents and firefighters drew water heavily,” NBC News reported.

It’s one thing for natural disasters to flood source water bodies with contaminants: those would at least go through drinking water treatment plants for mitigation. But research following the Camp Fire has shown that a dangerous amount of contaminants with the potential to cause serious, acute health issues in consumers were deposited directly into the infrastructure carrying drinking water from the treatment facility to points of use where they have lingered ever since.

“Ten months after the Camp Fire, the region’s major drinking water systems — Paradise Irrigation District and Del Oro Water Company — still contained unsafe levels of cancer-causing chemicals,” per Undark. “Benzene levels have been found above 500 parts per billion (ppb) in water from both utilities. California’s safe drinking water limit is 1 ppb. In Paradise, methylene chloride levels were as high as 28 ppb, more than five times the safe limit. Many other harmful chemicals were found — when they were looked for.”

It is unclear how local water systems might address the problem and it appears poised only to get worse as wildfires increase in likelihood. One potential fix proposed by officials appears costly and time consuming.

“Those who have assessed the problem say the water district may be able to clean pipes to some homes later this year, but it will take two years and up to $300 million before all hillside residents can safely drink, cook, or bathe in the water,” per NBC News.