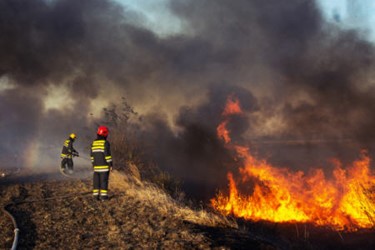 The latest extreme blaze in California, known as the Kincaid Wildfire, has burned tens of thousands of acres, prompted the evacuation of thousands of residents, and consumed more than 100 structures. And naturally, as with any widespread catastrophe, there have been significant impacts on regional water treatment operations.

As the fire was spread by intense winds, local power outages prompted bans on water use and concerns around supplies as firefighters continued their battle. In Vallejo, CA, for instance, a water use prohibition for residents went into effect.

“Because of the power outage that includes City Hall, the pumping station is unable to treat water, thus limiting the amount of available water to residents, [assistant to the city manager Joanna] Altam said, adding that because of the outage, ‘we don’t have access to well water until the power can get turned on,’” according to the Times-Herald. “The water emergency is magnified as firefighters battled two fires near the Zampa Bridge and Cal Maritime.”

“Northern winds are expected to … pick up where Southern California Edison warned it might black out about 308,000 customers,” per the Coeur d’Alene/Post Falls Press. “San Diego Gas & Electric warned about 24,000 customers could lose power.”

Though the fire is reportedly well contained and evacuation orders have been lifted at the time of this writing, the high winds and proactive efforts have resulted in power outages affecting more than 1 million customers, according to Newsweek. As noted above, those outages have significant impact for drinking water and wastewater operations.

“The power shutoff impacts the city’s ability to pump raw water for treatment, limiting us to what was pumped in reservoirs pre-power outage,” Vallejo’s city government tweeted, per Newsweek. “We all must do our part to extend the water supply.”